"Direct Action is a Worshipful Act": The Christian Socialism of Rev. Chaz Howard 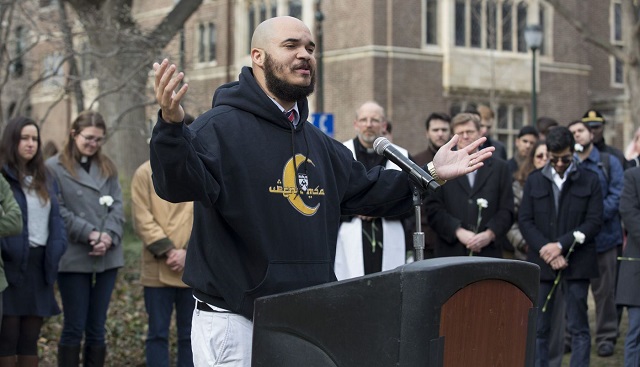 These days, the Reverend Charles “Chaz” Howard is an Episcopal priest and longtime chaplain at his alma mater, the University of Pennsylvania. But, by his own account, he was “a pretty spotty churchgoer” growing up. He never really read the Bible on his own until he was in college. When he finally sat down to do so, the second chapter of the Acts of the Apostles knocked him for a loop.

“I remember reading the passage about the members of the early church sharing everything in common, and it just struck me as such a deeply loving act, making sure everyone in the community had what they needed,” he says. “It felt like a critical refutation of this very selfish, hyperbolic capitalist society here in America.”

Reading the New Testament did not immediately cause Howard to declare himself a socialist. “But that passage deeply affected my goals,” he says. “I decided I did not want to be rich.” He pivoted from his initial plans of going into politics. Instead, he began preparing for the seminary.

Howard was then still a young man embracing college life: pledging a fraternity, singing in an a cappella group, and immersing himself in sports and student government. But he had seen struggle. When he was 11 years old, his mother died in his arms from a heart condition. His father died a few years later. During his teenage years, Howard was raised in Baltimore by an older sister.

It was hard. One of the poems in Awe and Awful, which Howard published in 2013, is titled, “Orphans and Widows”:

Most orphans pray with their feet

Never getting too close to those who might love and leave . . .

I pray best indoors—alone/with a window open because you never know who might come in.

As a high school track athlete, Howard traveled from Baltimore to the legendary Penn Relays. He fell in love with the campus and vowed to return as a student. When he achieved his dream of being accepted at the Ivy League school, he felt like he was finding a new family. Then he met his freshman advisor. “Another Black student from Baltimore,” the advisor told Howard. “You’ll probably fail out, too.”

As it happened, Howard’s embrace of the college party scene and use of alcohol to numb the pain of the loss of his parents did lead to him being expelled for low grades. But Howard rebounded. He gave up drinking, worked his way back into Penn’s academic good graces, and graduated on schedule.

Howard went to seminary and began a lifelong study of Black liberation theology and the movement legacy of the Black Christian church. The legacy was a personal one. Howard’s paternal grandfather, also named Charles Howard, had been an activist attorney and journalist who was friends with Paul Robeson and a correspondent with W.E.B. DuBois. The elder Howard delivered the keynote speech at the Progressive Party convention in 1948 that nominated Henry Wallace for president.

Howard’s grandfather died before he was born, but a cousin sent on copies of the elder Howard’s letters. “As I read his correspondence with Robeson and DuBois and his critique of capitalism and racism, his leftist politics drew me toward the question so many Black Americans have wrestled with, then and now: Is socialism the vehicle for our final liberation in this country?” To Howard, the Biblical, family, and historical examples inspired him to make his own embrace of socialism.

Howard wrote his doctoral dissertation on Black liberation theology and its connection to campaigns for social change, a treatise that he eventually reshaped into the 2014 book Black Theology as Mass Movement. His research revealed a deep reservoir of socialist practices in the Black Christian tradition. “At many stages in our history, the word socialism scared people off, so often we don’t want to use that to describe projects within Black Christian history that look and feel and smell socialist,” he says. Howard points in particular to church-organized sharing of resources, especially in times of emergency or tragedy. “That kind of subsystem within the larger capitalist society really spoke to me.”

In Black Theology, Howard reviewed the long history of Black Christians, many of them clergy, who embraced democratic socialism even as they rejected the atheistic tenets of Marxism. The list includes Rev. George Washington Woodbey, born into slavery before becoming a turn-of-the-century Baptist minister known as “The Great Negro Socialist Orator.” Woodbey published articles in the Christian Socialist newspaper, and wrote a well-received pamphlet, The Bible and Socialism. His contemporary, African Methodist Episcopal (AME) Bishop Reverdy Ransom was also a leading socialist figure. “That the Negro will enthusiastically espouse the cause of socialism we cannot doubt,” Ransom insisted in 1896.

“These great early Black pastors who were also explicitly Black socialists gave me permission to say, ‘Maybe that’s possible today, too,’” Howard says. He looked to more recent models as well. Many of the leaders of the civil rights movement, including A. Philip Randolph, whose father was an AME minister, and lifelong Quaker Bayard Rustin, openly identified as Christian socialists. Others like Martin Luther King, Jr. did so more quietly. Theologian James Cone, author of the landmark 1970 A Black Theology of Liberation, contributed to the religious socialism group of the Democratic Socialists of America. Today, Howard is a member of that same group.

So is Cornel West, who has had a formative influence on Chaz Howard’s life and career. While in seminary, Howard worked part-time in the campus bookstore, where one day he pulled from the shelf Prophesy Deliverance!: An Afro American Revolutionary Christianity. It was West’s first book, a 1982 exploration of the conflicts between Black religion and capitalism. “I believe the alliance of prophetic Christianity and progressive Marxism provides a last humane hope for society,” West wrote.

“That book just messed me up in a good way,” Howard says. “After reading that, I said, ‘This. This is what I believe.’” Howard eventually persuaded West to serve on his dissertation committee. Howard says West, the grandson of a Baptist minister and a self-described non-Marxian democratic socialist, is far and away the most profound intellectual influence on his life. “He is one of the few people who I can unhesitatingly describe as a prophet in our modern times. He’s the smartest person I have ever met,” Howard says. Then he laughs. “His mind is like his Afro: just expansive and great.”

Howard also treasures the warm encouragement and guidance that West provided during Howard’s student days, an example he keeps in mind as he counsels Penn students. After working as a street outreach worker for the homeless and as a hospital chaplain, Howard was named Penn chaplain at just 29 years old. “Under-qualified,” he says now.

But Howard quickly became a beloved campus figure, welcoming students at their freshman convocation, sending them out into the world at commencement, and providing a wellspring of compassion and support between. He is known for his tattoos, for sharing self-deprecating stories about his childhood ambition to be a backup dancer for Janet Jackson, and for being a steadying presence in times of tragedy and loss. A walk across campus with Howard takes twice as long as usual, a colleague told the Pennsylvania Gazette in 2018, because everyone wants to stop and talk with Howard as if they were his best friend. This year, he was named the school’s first-ever vice president for social equity and community.

In Black Theology, Howard insists that an academic’s work of mentorship and teaching, along with the clerical work of pastoral care, is a blessed and impactful form of activism. But he also makes the case that scholarly and private work it is not enough. He calls for Black theologians to share their message not just in academic terms but in language accessible to the masses—to “make it plain,” in words of the common response to Black Christian preaching.

“The strongest theological work grows legs and marches out of the classroom and off the page into the streets working for change in the greater society,” he writes. “I just dread the possibility that (Black theology) has moved to classrooms so many floors above the streets that it no longer hears freedom songs being sung as our people march.”

In Awe and Awful, Howard prays for the strength to unapologetically confront our tragic inequalities:

When did we lose a sense of the absurd?

When did having neighbors, fellow citizens, fellow humans sleep on the street, die of malnutrition and starvation, stop being absurd and simply become accepted?

Make me crazy for you, Lord. I pray you wake me up to that which is absurd and abhorrent to you. And then create in me a courage that is absurd to the world.

And I will care as you do, with an absurd love.

But being crazy about society’s injustice is not typical behavior for a high-profile administrator of a university populated by those who society is treating quite well. Penn is the alma mater of former President Donald Trump and several Trump family members, as well as the recent academic home of then-“Presidential Practice Professor” Joe Biden. Howard is committed to being the chaplain of all of them. “I feel charged to love all of our students, as opposed to saying, ‘This is my team,’” he says.

In Black Theology, Howard compares academics’ dilemma of institution vs. activism to Jesus’ admonition in Matthew’s gospel that one cannot serve both God and mammon. He also invokes DuBois’ notion of the double consciousness that Black people must navigate. Howard candidly admits that his university salary helps fulfill his obligations to his wife and three daughters. Yet he concludes that the only response to the challenge is for Black theologians to act more boldly, singling out the Occupy movement as a brave and eloquent action which could have benefitted from their support.

So Howard is not about to let the Black Lives movement pass him by. “This past summer, being out on the streets as part of the George Floyd and Breonna Taylor protests, that was part of how I express my spirituality,” he says. “Direct action is for me a worshipful act.”

Not many Ivy League vice presidents speak this way, much less act on their words: Howard has been arrested for civil disobedience several times. Now he is embracing public activism even more deliberately. For example, although he has never shied away from the identity of a democratic socialist, he has never worn the label on his sleeve, either. But Howard feels it is time to acknowledge that particular Black liberation stream which flows through his politics and his service.

Navigating that stream is not always easy. “The deep fear and misunderstanding of socialism is still real,” he says. During the recent election season, one of Howard’s neighbors posted a “Socialism Has No Home Here” sign. “But the retort is that if caring for the poor and working for peace and to save the planet is socialism, then fine. It’s not the sort of thing we need to whisper about.”