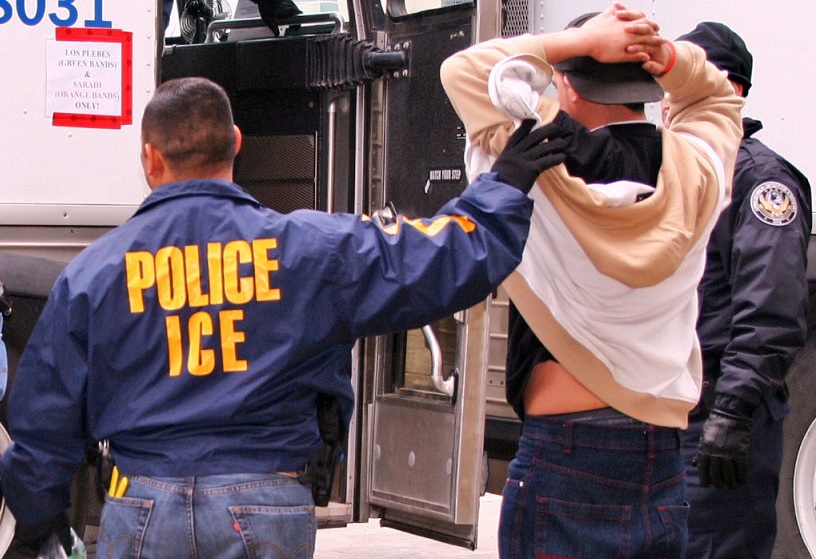 Reflections on Faith and Action in an Age of Concentration Camps

I have been tremendously moved by the outpouring of passion, determination, and action by #JewsAgainstICE. The unique moral and historical authority with which Jewish people can call all U.S. citizens to accountability and conscience is powerful and urgently needed in this moment. Our government is carrying out and escalating a program of ethnic cleansing, committing large-scale human rights abuses, and maximizing the cruelty of their efforts to intentionally terrorize millions of Brown and Black people. Government policy and racist rhetoric in turn have fueled privatized anti-immigrant violence and mass shootings. If not now, then when?

But there are more personal reasons why I am so deeply affected by this movement. They have to do with my own background and personal commitment to Never Again. I am a non-Jewish German. I have lived my entire life in the shadow of the question, What would I have done had I been alive during the Third Reich? In the Trump era, many people have asked themselves this question. But for me, it’s not an abstract historical reference — it’s my flesh and blood.

My grandfather was a Nazi. When I type that sentence, I immediately want to qualify it; to say he wasn’t an ideologue and he joined the party more out of self-interest to protect himself from local authorities than out of genuine conviction… but that sounds as convincing as the Trump supporters who swear they are not racist. The truth is that on his deathbed, he told my father that he didn’t agree with Hitler about the Jews, but other than that, he thought the Führer was right. Yeah, my grandfather was a Nazi.

He was a prisoner of war on the western front when my father, age 13, his three younger siblings, and my grandmother fled the oncoming Russian army in the east and became refugees, ending up in my mother’s hometown.

My mother’s father, meanwhile, was initially exempt from military service because he was the town’s baker. He was avowedly “nonpolitical,” steadfastly refusing to join the Nazi party despite repeated pressure from party officials. His independent-mindedness eventually irked one of them enough that he got shipped off to the eastern front and ended up a Russian prisoner of war. He wasn’t a Nazi, but he didn’t do anything to stop the Nazis.

My mother remembers Kristallnacht and the morning after – she was five, but it was such a traumatic event it was impossible to forget.

She remembers some of her father’s employees who were members of the Nazi paramilitary (the Sturmabteilung, or SA) coming out of the shop to watch the Jews who had been rounded up marched down the street. To where, she didn’t know; doesn’t know. She remembers her mother imploring them to come inside, telling them they could watch from behind the windows, just please not in the street.

Moral hindsight instructs us to act where our forebears failed to

This image – of my grandmother pleading with her Nazi employees to limit the spectacle – says so much. Unwilling to protest the persecution paraded right in front of her; but not wanting the neighbors to think our family approved of it… trying to bargain with the SA men; but not challenging their support for the barbarity.

It’s an image of inner conflict and ultimately of complicity. And it leads me right back to that question, What would I have done?

And more importantly, what do I do now? Moral hindsight is 20/20, for sure, but it has real value if it instructs the present and moves us to act where our forebears failed to. Which is precisely why I am so moved by the Jewish-led cry of #NeverAgainIsNOW: it’s a reminder to use that 20/20 hindsight in exactly that way.

It is in the context of our own government’s present-day concentration camps that I have picked up Dietrich Bonhoeffer’s The Cost of Discipleship again. I’m haunted by his insistence on the necessity of suffering in order to faithfully follow Jesus. My own faith has long been shaped by the Gospel stories that so clearly show Jesus siding with the poor, the marginalized, and the oppressed; and his call to “take up your cross daily and follow me.” I believe that being a Christian means, at a minimum, using and risking your privilege and power to actively fight the inequities and injustices around you.

Right now that clearly means fighting the administration’s concentration camps, family separations, ICE raids, and the other specific dimensions of the evil of ethnic cleansing. And there are thousands of people doing just that.

This past summer, in response to the Trump administration’s heavily publicized raids, #JewsAgainstICE and others led protests and direct action that shut down ICE headquarters in Washington, DC (with Cosecha); shut down rush hour traffic in New York City (Rise and Resist); occupied a Senate office building in DC (#CatholicsAgainstICE); blockaded the ICE office in Atlanta; marched on the Japanese-internment-era concentration camp in Lawton, OK that the government had announced plans to re-open (Tsuru For Solidarity and others) – among many, many other protests, in response to both the raids and the administration’s other anti-immigrant policies. These actions have continued into the fall.

Immigrant rights groups are also canvassing cities to hand out know-your-rights information; and allies are organizing rapid-response networks for real-time documentation and interruption of ICE raids. In July, the Trump administration blamed these efforts for their inability to round up the 2,000 people they had planned to detain. Churches are offering sanctuary. Activists are pressing Democratic politicians to stop cooperating with the administration, and targeting businesses profiting off the machinery of ethnic cleansing.

We need all of this and much more. Above all, we need to find ways to disrupt the execution of ethnic cleansing in every way and at every level, wherever and however we can. Actions like the DC ICE shutdown. Actions like the neighbors who formed a human chain to keep ICE from arresting a father and son. From the very top to the very bottom of the system. As Kate Cronin-Furman has argued, we should make sure those making the system work face consequences – from CBP and ICE agents and DHS lawyers to the corporations that supply the concentration camps and the banks that fund them – until they are either unable or unwilling to continue their participation in mass atrocities.

A hard look in the mirror

Now is not the time to limit the spectacle. Whether it’s in Congress or at the Amazon-owned Whole Foods, it’s time to not give a damn about decorum, about business as usual, or what the neighbors think. It’s time to act.

From my faith perspective, the more privilege and power we have, the more we are called to put in play for the pursuit of justice. “From everyone to whom much has been given, much will be required,” Jesus tells his followers in the Gospel of Luke (12:48). I take a hard look in the mirror in saying that.

History offers lessons (U.S. history, too, of course), but the future is ours to write. I want to help write one where my grandchildren have a different story to tell than the one I have.

Dorothee Benz is a writer, organizer, and strategist who has spent decades on the frontlines of social justice struggles in the United States. Follow her on Twitter @DrBenz3.