"When did we see you homeless and stateless?" Reflecting on Matthew 25 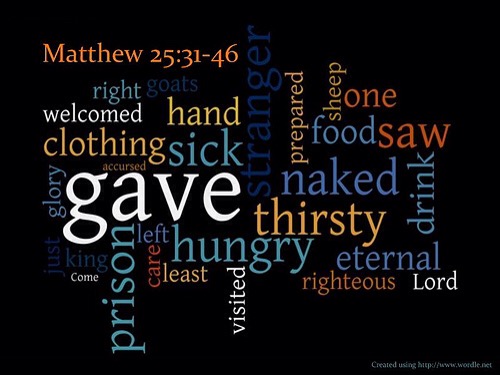 A year back, tens of thousands of young children trekked across our borders from the south, thirsty, hungry, afraid, injured, sick, lonely, and bereft. Over the past summer, an unknown number of Rohingya Muslim refugees from Myanmar, persecuted for their religion, have been drifting around the Indian Ocean, with no one willing to help. In the past few months, tens of thousands of people fleeing violence and war in Syria, Eritrea, Libya, and other places have risked their lives to cross the Mediterranean, with hundreds drowning. The reality that up to as many as 11 million Syrians have fled their homes, has finally hit Europe and the West. Now that these desperate people are finding their way across European borders – even though it is only a small fraction of the total –the issue is suddenly at the top of the news agendas.

The global crisis for refugees is at an all-time high. We call them “migrants,” a benign word that makes it seem as if they’re just relocating for the season. We call the children traveling alone “minors,” which is technically correct, perhaps, but for all intents and purposes they are orphans.

We need a humane response to refugees. Compassion for refugees is not a religious or social democratic issue; it is a human rights issue on which everyone should be able to agree.

This inability of the richer nations to deal with this crisis has made me think of the apocalyptic texts in the Gospel of Matthew, chapter 25:34–40. Jesus speaks of the day that the Son of Man will come to judge the world. From his heavenly throne, surrounded by angels, he will separate all peoples as a shepherd separates sheep and goats. The King, the Son of Man, says to the sheep on his right:

“Come, you that are blessed by my Father, inherit the kingdom prepared for yu from the foundation of the world; for I was hungry and you gave me food, I was thirsty and you gave me something to drink, I was a stranger and you welcomed me, I was naked and you gave me clothing, I was sick and you took care of me, I was in prison and you visited me.” Then the righteous will answer him, “Lord, when was it that we saw you hungry and gave you food, or thirsty and gave you something to drink? And when was it that we saw you sick or in prison and visited you?” And the king will answer them, “Truly I tell you, just as you did it to one of the least of these who are members of my family, you did it to me.” (NRSV)

In the same way, he says to the goats, on his right side, that they will be cursed and go into the eternal fire, because they did not feed; did not quench the thirst; did not receive, clothe, care for, or visit.

I’m not saying that the idea of future judgment should motivate nations in crafting refugee and asylum-seeker policies. Nor should it shape how we live our individual lives, for that matter. But texts that powerfully express the fundamental values of both Christianity and the solidarity movement can be helpful. The vision of Matthew 25 channels these values in a particularly effective way, in a way that motivates action for all refugees.

Dire as the situation is for adults, for children it is even more so. In the Bible we find the expression “widows and fatherless,” which reflects a society where women were not legally independent. A widow, whether or not she had children to support, rarely had a chance to succeed in supporting herself, the only option often being prostitution or destitution. Because of this, Israelite laws, and Jesus specifically, demanded that widows should be provided for. Fatherless children were, in reality, orphans and had no one to care for them economically. In our own time, women are legally independent, but children are still very vulnerable, even when they have certain legal rights. It is wrong to distinguish between children seeking asylum and other orphans. They should have equal protection.

In Europe, fear-driven rhetoric portrays refugee children traveling alone as pawns being used as bridgeheads by cynical adults and traffickers. They’re being sent alone to risk the dangers of the road, it is alleged, so that once they achieve the legal residency permits, they can petition for family reunification and bring the rest of their families to their new countries. By giving children such as these protection and asylum, the governments are being too permissive, the argument goes. The assumption is that people who don’t really need protection are exploiting the system and that governments need to make examples of them.

Although some people will always seek to profit from any humanitarian crisis, it is wrong to use individual children as “examples.” In the United States, a similar type of accusation is that pregnant women are sneaking across the border just in time to have their babies, thus producing children who are U.S. citizens. This vilification of individuals who each have a unique story is immoral. This rhetoric is particularly sinister when one takes into account that the risk of rape along the route that most refugees travel to cross the U.S. border from Mexico is so high that all women take contraceptives. The whole “anchor-baby” rhetoric should be abandoned and the rights and needs of each refugee respected.

Speaking from my own tradition, as Christians and socialists, we ought to return to the use of the term “orphans” when speaking of child refugees fleeing without their parents. Orphans lack the most fundamental thing in life, someone who cares about them, gives them unconditional love, care, security and what they need of food, clothes, and education. Children are supposed to play, learn, and grow. It is grownups who are responsible for providing them with this. We need to take responsibility!

Rannfrid Thelle teaches religion at Wichita State University, and is a long time activist in the Norwegian Labor Party and in DSA