A Seat at the Table: Women in the Bible 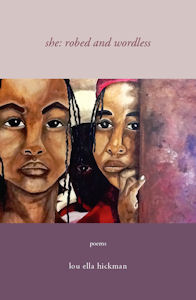 The first stanza of Lou Ella Hickman’s “a woman at the last supper” is a small revolution, as any good poem should be.

One of the reasons the Catholic Church cites for closing the priesthood to women is that there were none of us at the Last Supper. Pope Francis recently reaffirmed his predecessor’s staunch stance against reexamining the all-male priesthood--just a short time after having given so many of us hope by talking about ordaining women as deacons.

Hickman, who is a nun as well as a poet, sets the record straight by making a place at the table for a woman, something she does throughout this volume of poetry. Every poem is portrait of a woman in the Bible painted with swift, bright strokes. Hickman takes the barest outlines from scripture and gives the women a story and a sense of agency.

Often they don’t even have names: a woman caught in adultery, Lot’s daughter, Peter’s mother-in-law. But if scripture gave them short shrift, Hickman does not. She fills in the emotional blanks. What was it like for all of those women whose men went off to follow Jesus? For the wife of Nicodemus, a Pharisee who appears in the Gospel of John three times, including as a helper at Christ’s burial: “now the hours sit on their hands between the meals i serve.” The mother of the apostles Peter and Andrew describes herself “alone now in this bare room/needing some light.”

But discipleship is not restricted to men. Mary Magdalene, once possessed by devils, sees Christ as the only person who truly understands her spiritual gifts:

after all, He heard an inner music
beneath my demonic din –
the amazing sound of holy fire and wind

It is not all triumph. Hickman turns her pen to the rapes, the sorrows, the enforced silence. But each woman is more than what is done to her. Gomer, wife of the prophet Hosea, is a prostitute or promiscuous women, depending on your translation. Usually she’s reduced to a symbol of God’s unfaithful people. Hickman gives her agency. Gomer chooses to be “a wife he could not control” and wears “silence and honor’s claim.”

The women of Hickman’s poems do the work that still disproportionately falls to women: feeding, cleaning, tending. That woman at the Last Supper predictably ends up washing the dishes. The poet transforms these tasks into sacred acts. Possibly the most beautiful poem of the collection is “women who helped bury Jesus.” The corporeal service and the loss they feel are linked: “our alabaster jars carry our grief.” Caring for the body ultimately brings them a spiritual gift--unity with Christ: “this same perfume/clinging to the shroud/our faces and hands.”

One of the last poems of the volume, “lady hope’s riddle,” hints at a unifying message in these portraits of diverse women. I share it in full:

The secret of this volume is that women have always been and will always be as close to the divine as men. History has seen women suffer violence, reduced to chattel, spurned as a temptation, and excluded from ministry. Hickman does not diminish that. But she makes it clear that human history is not God’s history, which is “today as well as tomorrow.”

Change is slow, but God and poetry are always right on time.