A Serious Comic Perspective on the Beginnings of Mormonism 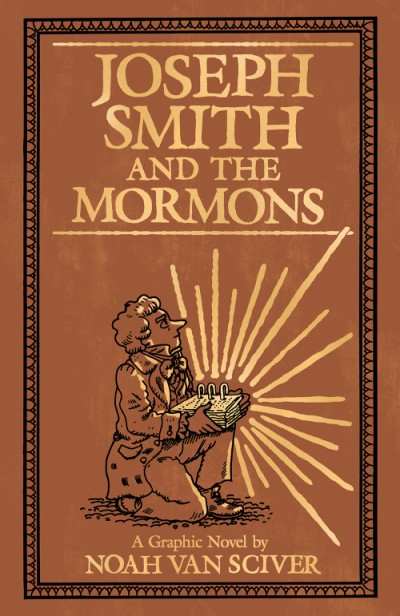 As an intellectually inclined, book-obsessed, life-long member of the Church of Jesus Christ of Latter-day Saints (the official name of the faith community usually referred to as “the Mormons”), I have read many histories of my religion. I’ve read so many, in fact, that I sometimes forget that such histories aren’t necessarily being written for knowledgeable believers like myself, and I end up criticizing them for getting some small detail wrong or for skipping over some academic controversy, forgetting that the purpose of good histories is to tell a story, one that draws you in. And when it comes to telling a story about a religious movement, presenting something compelling is essential, because if the storyteller can’t convey the circumstances or the feeling that drew people into the faith in the first place, the history can’t succeed.

All of that is to say that once I got over my intellectual stumbling block, I was able to enjoy Noah Van Sciver’s amazing Joseph Smith and the Mormons–a wonderfully researched and captivatingly (and sometimes, though not usually, quite beautifully) drawn graphic novel. Across more than 400 pages, Sciver presents an unconventional telling of beginnings of the faith he was raised in, departed long ago, but has maintained a curiosity about and a confused sympathy for ever since. Although the tale it tells is mostly straightforward–though emphasizing some characters who rarely get much attention in typical Mormon histories and by-passing some of the most (in my view, anyway) intriguing beats in the story of Mormonism–it stands as a history as solid as many more scholarly ones.

But given that most readers won’t be engaging this book in scholarly terms, we should consider its artwork and its comic method first. As a work of visual storytelling, the book–which Sciver had worked on for years–is stunning in its craft, even if you’re not a fan of the purposefully rough, earthy, stylized naturalism of his drawings. Van Sciver never inserts himself in the panels as an omniscient narrator, whether to introduce the historical actors of his story (beginning with Smith himself, who as a hard-working, religious sensitive young man with a weirdly magnetic personality contributes to his family’s difficult labor and meager earnings by treasure hunting) or to provide transitions as the locations change (the community that forms around Smith’s revelations, particularly following his production of the Book of Mormon, moves–sometimes due to persecution, sometimes due to self-induced financial calamities–from New York to Ohio to Missouri to, ultimately, Nauvoo, Illinois, where Smith was assassinated in 1844).

Instead, every panel is either a stand-alone visual or includes dialogue between characters, most of which–except in a few wonderfully creative instances involving Emma Smith, Joseph’s long-suffering wife–are well attested within existing historical records. (In a concluding section, Van Sciver lists the works of history and biography which guided his research into the conversations and conflicts around that he built his story around.) As an artistic and historical storytelling project alone, especially in capturing the crude sectarian violence and near-Pentecostal religious passion that characterized the early years of Smith’s religion-building, Van Sciver’s work deserves great praise. Consider his depiction (taken from Van Sciver's website) of the notorious moment, soon after the founding of the church, when Smith was tarred and feathered, in the attempt to get him to abandon his visions and get out of town; the banal gruesomeness of the moment is made plain: 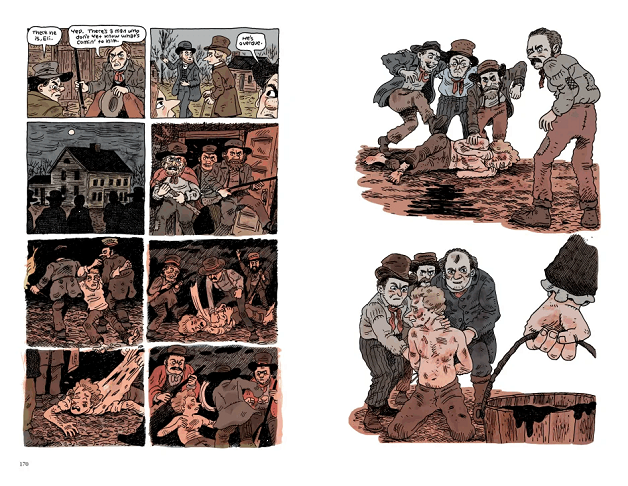 Those looking for panels exposing Joseph Smith as con artist will be disappointed, as will those looking to see him discoursing faithfully with angels. Van Sciver’s style is to bring to life what his contemporaries, both believers and enemies, said about Smith and his words, and his choices are intriguing. The inner life he visually grants to Emma Smith is touching, especially when he gets to the part of the story where Smith’s restorationist convictions led him the claim that returning to the Old Testament order of marriage–including multiple wives–was necessary for salvation, a teaching that he foolishly attempted to keep hidden from Emma, which had terrible domestic consequences. But even more than that, I found myself engaged–once again as an insider very familiar with this story–by his treatment of John C. Bennett, an ambitious and sophisticated confidence man who made his way to the top of the Mormon hierarchy in Nauvoo before his sexual predilections led to his downfall and his turning against Smith, with ultimately murderous results. Through Van Sciver's art, I found myself not exactly sympathizing with Bennett, but partly understanding him, and that's no small accomplishment.

Russell Arben Fox is a professor of political science at Friends University, a small Christian liberal arts college in Wichita, KS. He is a member of the Wichita chapter of Democratic Socialists of America.