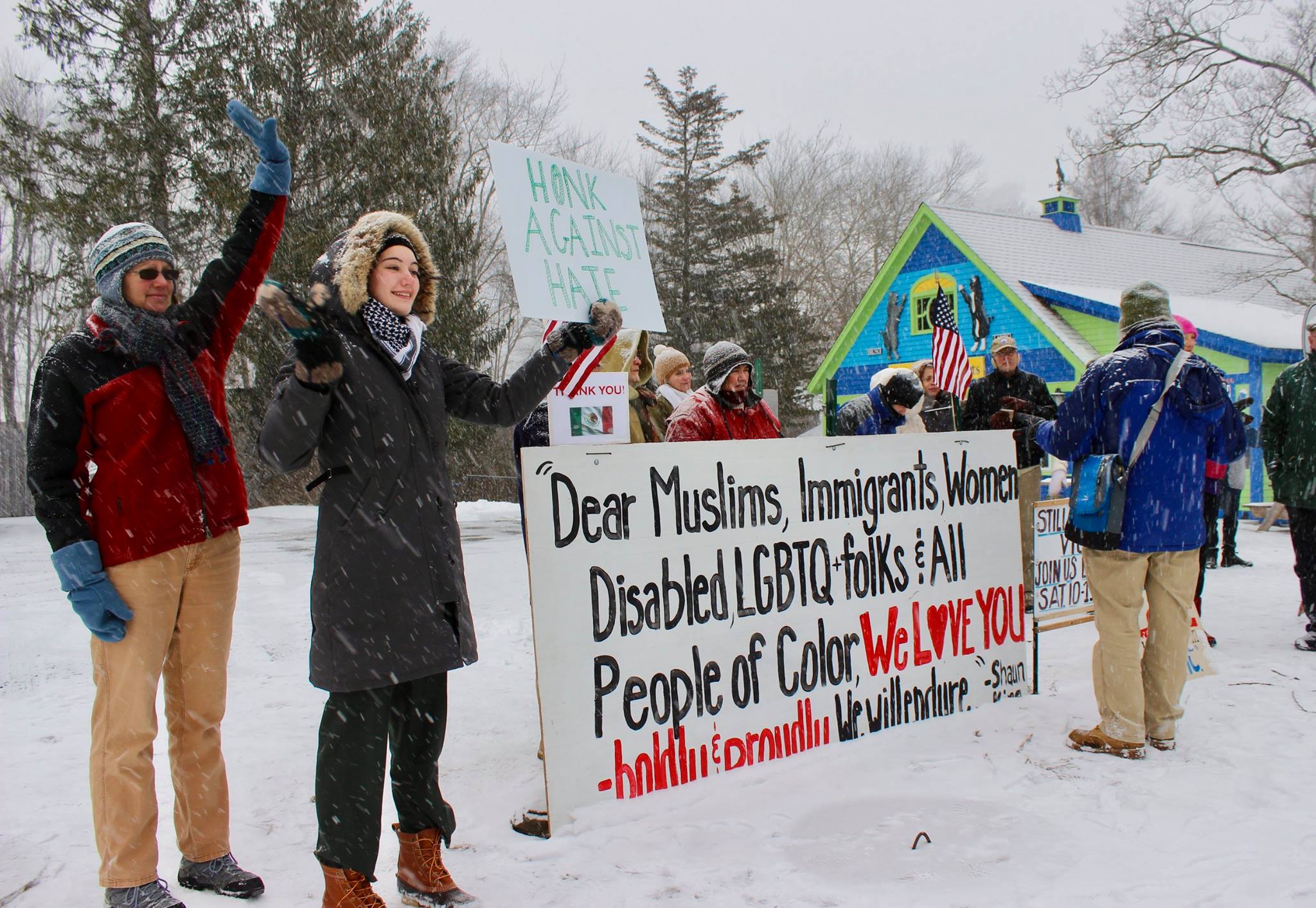 My small, rural town went for Donald Trump. The morning after the cataclysm, Theresa Govert, a woman I had never met, put up a sign at what passes for a major intersection around here.  On it, she had painted the words of activist and New York Daily News columnist Shaun King:

Dear Muslims, Immigrants, Women, Disabled, LGBTQ+ Folks & All People of Color, We love you - boldly & proudly. We will endure.

In less than a day, someone had painted “Trump 2016” over those words of love. A mother and daughter whom Theresa had never met showed up to help her repaint the sign. There was great outcry about its being on a public space. So Mark Thiede, the owner of Two Wrasslin’ Cats, who knows everyone, agreed to give the sign a home in front of his coffee shop.

And that’s when it all started. Greg Coleman and Edwina Trentham, a couple who had only lived in town 11 years and were therefore “new people,” organized a vigil. People began gathering around the sign every Saturday morning. We just stood there and waved at the drivers who waved at us, as well as the drivers who gave us a thumbs down. (There were more of the former than the latter.)  We talked. We talked about our fear for our Muslim neighbors. We met our Muslim neighbors. We worried about marriage equality, borders and oncoming kleptocracy. Though we discussed issues, these conversations were different than those I’d had in a lifetime of activism, because we were all gathered around a message of love. A gospel.

I am often the most religiously observant person in the room.  A number of my colleagues see my faith as a blind spot or perhaps an eccentricity. When I’d worked on issues like reforming solitary confinement or extending mental health care to underserved communities, the word that I wanted to use was “love.” All those carefully calculated strategies to get bills through legislatures came down to serving Christ, to loving my neighbor as myself. But to say that out loud would be like walking into a public hearing naked.

Around our sign, we talked about love. We hugged strangers and new friends. We became the nascent Beloved Community, an idea central to Martin Luther King’s thought and spirituality. King foresaw a society where poverty, racism and militarism had been defeated by a critical mass of people who had adopted non-violence in its deepest and most demanding forms. This was not some utopian abstraction for the civil rights leader. He believed that it could and must be realized.

Our small town vigils are not so much about any one issue as about a shared conviction that every person on earth is infinitely valuable and necessary to every other. We cannot be complete unless we stand in solidarity.

This was something I had realized intellectually without internalizing it. I love my neighbor from a distance. I work alone. Just give me a laptop and 20 minutes of quiet time and I’ll come up with a letter to the editor that will shred the opposition. No need to leave the sofa.

On December 24, there was a cold rain coming down. I got a hot coffee in Two Wrasslin’ Cats to get me through the vigil and waited until the last moment to step outside. No one else was there. I went out at 10 a.m. sharp, prepared to stand alone for an hour, resolute but sad. One by one, my friends trickled in. We laughed at the rain and waved at the passing cars. When it was over, the 40 or so of us went into the coffee shop for hot chocolates and hugs. I’d known these people for a little more than a month. My Christmas would have been disappointing without them. As far as spiritual sustenance goes, it approached midnight Mass.

And so it continued. We got ourselves a name: Together We Rise CT. We got organized and started calling our legislators about bills that were important to us. We had a sister event to the Women’s March that drew more than 500 people. I gave a speech about community, which I called “a miracle,” because it is.

Sadly, the Women’s March was the last time that our sign was rooted firmly in the ground.  Town Hall had been getting complaints. Not everyone was a fan. There were some negative letters to the weekly newspaper. One even accused me of being a socialist! Apparently, our sign was taking up more street frontage than the zoning regulations would allow.

We had a meeting, naturally. And we talked about what to do. Most people wanted to fight. A few wanted to mourn. I didn’t think it mattered. “The sign did what it was meant to do,” I said. “It brought us together. Don’t see this as a defeat. This is nothing. We are what matters.”

I said this because I come from a sacramental tradition. There is the sign--the water, the oil, and so on. And then there is the sacrament, the gift of sanctifying grace. The town could take away our sign, but not our communion.

The sign now lives on the side of Two Wrasslin’ Cats and is brought out on a movable platform one hour a week, when we stand around it in ever larger numbers. We pass out action alerts, collect emergency food, and strategize about everything from preventing gerrymandering to making sure that the senior center has a marvelous Easter feast. We talk about how lucky we are to have each other and how that solidarity will enable us to protect others and ourselves in the coming difficult years.

Although many of us are finding this experience extraordinary, I suspect that it is common as rain.  It is difficult to even track all the small resistance groups that are springing up around the country. We are struggling just to coordinate with those in our immediate area. I believe that these groups also form the nascent Beloved Community and are having experiences similar to those we’re having here in mighty East Haddam, Connecticut.

The Trump/Bannon presidency is organized around hate.

The resistance groups are organized around its polar opposite.  And therein lies our power and our hope.