A Socialist on the Porch 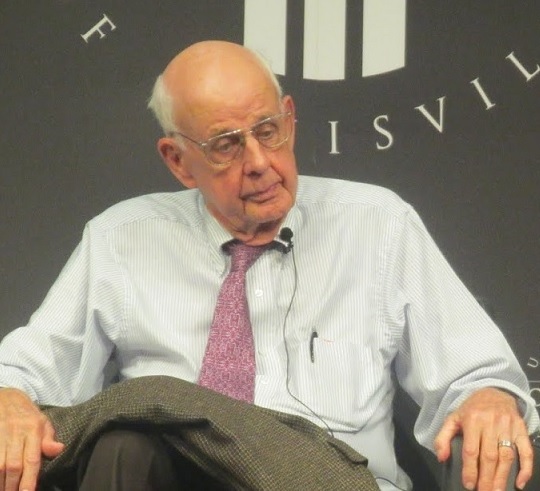 There wasn't a prayer at the beginning of the Front Porch Republic's recent conference in honor of Wendell Berry in Louisville, which is a fact that probably at least a few of my fellow leftists--among those that are actually familiar with FPR anyway, that is--might be surprised by. I should have asked the urban agriculture advocate from Indianapolis sporting the Pete Buttigieg button, or the Dorothy Day-quoting malcontent who gave a blistering anti-war presentation, if they'd expected otherwise, but I didn't get the chance. No regrets, though; overall, it was an inspiring--though definitely not sectarian--day.

With the affirmation of "Place--Limits--Liberty" having accompanied the website (and now publishing house and printed journal) from its beginning 10 years ago, the various localist, distributist, traditionalist, and agrarian sentiments which have been expressed in association with the "Porcher" label are often reduced in some observers' minds to "Christian conservatism," and left at that. This reduction is not wholly inaccurate (as any perusal of the website archives will make clear, explicitly Christian and conservative voices have frequently occupied the Porch), but it is unfair. It is unfair, I think, because it fails to reckon with the pluralism which should be part of any project of socialist transformation--and specifically, the plain fact that so much of what these particular localists, agrarians, and other assorted Christian oddballs call for is, if not socialist, then at least pretty damn close. In the FPR vision, you see support for democratizing the economy and shifting us away from private capital and towards social goods, but often expressed in a way unlikely to be encountered in a typical DSA chapter, at least if mine own is any indication. The assumption, more often than not, is that democratization and socialization both will and should liberate people from their places. By contrast, the FPR vision of a more democratic economy would seek to empower people within their places. Is socialist practice compatible with such an approach? Well, as Wendell Berry always reminds us, look and see.

This gathering--the largest which FPR has ever organized, and one of their best--had Berry's life and work as its centerpiece. The 85-year-old novelist, essayist, poet, farmer, life-long Democrat, supporter of same-sex marriage, self-described "mad farmer," and all-around contrarian was interviewed by his daughter Mary and spoke with the audience at length. He is no socialist in any formal sense, that's for certain. But he is a man who, from his pastoral place in rural Kentucky, has articulated one of the greatest and most persuasive critiques of capitalism, and its ruinous environmental effects, in all American history. A list of his essays, protests, and public denouncements of mountaintop removal mining, of the Vietnam War, of the complicated racism of his own beloved South, of industrial agriculture, and of so much is enormously long. In a recent, lengthy review in The Nation, Jedidiah Britton-Purdy recognizes the idiosyncrasies of, and his deep disagreements with, some parts of Berry's defense of rural culture and the household economy. But the overall thrust of his writings--that, in Britton-Purdy's assessment, "Berry has been straightforwardly and unyieldingly anti-capitalist" throughout his whole career--is difficult to deny. Berry himself didn't speak to directly about such things at the recent conference, but when a man strongly defends economic planning, limits on profits, co-ops and other forms of collective action, and concludes that without such, "farmers are successfully farming themselves into failure," it's hard to go away thinking you've heard just another American conservative at peace with the marketplace.

Berry's challenge to the comfort which so many (supposedly community-loving) Christian conservatives have with present-day capitalism was not alone at the conference. Prominently involved in organizing the event was Plough Quarterly, a journal published by Bruderhof, an international body of devout Christians who have built intentional communities--many of which are deeply committed to environmental sustainable and agrarian practices--all around the world. The latest issue of the journal--revolving around the theme of "Beyond Capitalism"--was prominently displayed at the conference, and copies were available to all those who attended. In that issue one found not only a fierce condemnation of Christians who don't perceive the incompatibility of conservative politics with their own faith--as author David Bently Hart concludes in his essay, "Whatever else capitalism may be, it is first and foremost a system for producing as much private wealth as possible by squandering as much as possible of humanity’s common inheritance of the goods of creation"--but a thoughtful consideration of the communism of John Ruskin, an interview about communal businesses which take Marx's dictum "From each according to his ability, to each according to his need" as their basic operating principle, and much more. More Commonweal than Christianity Today (and honestly, it is unlikely even Commonweal would ever go that far), this is, to say the least, not the sort of journal, and not the sort of arguments, one would expect to be commonly shared at a nominally conservative and Christian association.

Which, of course, is exactly the point: Front Porch Republic, like many other similarly contrarian localist associations, isn't any kind of formal friend to Christian conservatism, at least insofar as such a position is assumed to be part of the capitalism-friendly Religious Right in America. (Certainly that is the case for Wendell Berry, no matter how often conservatives try to claim him solely for themselves.) True, because of their talk of tradition, rural life, and community, it is easy for many (not all, but many) leftists to think that there is no place in these kinds of discourses for the diversity, participatory democracy, and economic egalitarianism which animates the socialist argument. As someone who has been part of FPR since the beginning, I won't pretend that your typical leftist might not find themselves somewhat at odds with what sort of material FPR often produces, and what sort of people FPR often attracts. Still, all I can say is: dig deeper.

There is, in the pluralism of America--and of any other free (or at least mostly free) country for that matter--resources for socialist thinking and action all around us, sometimes even--in fact, perhaps especially--in religious bodies, groups, and projects that seem conservative on the outside. Some of these exhibit what I've called "left conservatism" before, but whether or not such bodies or projects bring the different aspects of their belief system together into such an ideological whole, the simple truth, I think, is that anyone who takes community and tradition seriously will be, if they are at all honest, open to critiques of that free market which most thoroughly empties out and destroys local ways of life. And moreover, sometimes that openness results in perspectives that we on the left can, and should, benefit from, if we would look and see.

Russell Arben Fox lives in Wichita, KS, where he runs the History & Politics and the Honors programs at Friends University, a small Christian liberal arts college. He writes about democracy, community, and environmental sustainability in small to mid-sized cities, and blogs at In Medias Res, from which this essay has been cross-posted.