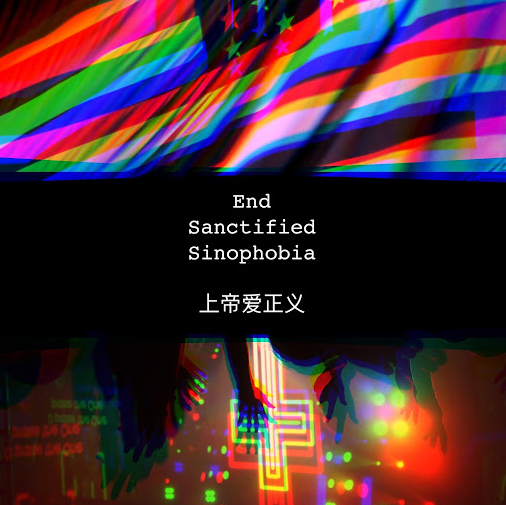 Last December I came across this tweet by Senator Marsha Blackburn of Tennessee: “China has a 5,000 year history of cheating and stealing. Some things never change . . .” Throughout 2020, I’d known that GOP senators--the same people exacerbating the hardship of low-income Americans and COVID-stricken ICE detainees--had been whipping their base into ecstatic hatred of those supposedly responsible for the “China virus,” inciting hate crimes to distract from the Trump administration’s mismanagement. Yet Blackburn’s tweet, which dispensed with even pretending to comment on the coronavirus, drove home the maliciousness of this tactic. Blackburn is a proud member of a Presbyterian megachurch that espouses concern for “immigrants and refugees” on its website. How could she get away with proclaiming herself a “woman of faith” while endangering Asian American Christians like myself?

My preoccupation with such questions, coupled with my determination to do something about it, led to my writing and circulating an open letter on what I call the “sanctified Sinophobia” of Christian nationalists in the United States. Signed by 700+ signatories so far, the letter insists that the uniformly Christian politicians who demonized China throughout the past year, continuing a sinister American tradition, must face accountability for emboldening their supporters’ basest instincts in the name of a “Christian” nation. Their chosen houses of worship, too, must repent for looking the other way. Documenting the church affiliations, faith-related statements, and anti-Chinese prejudices of each politician, the letter demands that pastoral enablers impose disciplinary action on, and issue public statements condemning, unrepentant demagogues. It also calls for solidarity from members of associated congregations and denominations, in the form of withholding support from passive churches and even stripping them of denominational membership.

Why focus on both churches and the politicians who sit in their pews? Here I draw on my participation in the New York  DSA Immigrant Justice group, which taught me that oppression tends to follow from institutions working in tandem. The guards who abuse detainees continue doing so because of county boards that sign lucrative government contracts with ICE. ICE, in turn, operates in no small part because the number of churches willing to harbor undocumented immigrants remains far too low for a religion founded by a refugee. Similarly, politicians feel free to incite violence against Asians because of the unwritten rules governing the relationship between the GOP and the religious institutions that support it. The putative spiritual leaders of these politicians perpetually overlook their extremely visible bigotry, or in the case of (Evangelical Presbyterian) Mike Pompeo’s pastor, defend them as paragons of Christian virtue. More often than not, these churches also trumpet their concern for racism in broad affirmations of “mercy and justice” like Christ Presbyterian’s statement. Members who actually care about mercy and justice should be appalled by this double standard.

All the churches named in the open letter, regardless of confession, belong to traditions that espouse some kind of disciplinary action for flagrant and unrepentant sin. The Catholic doctrine of excommunication, frequently misunderstood as a permanent ban, calls for a (reversible) deprivation of the sacraments for “the obstinate post-baptismal denial of some truth, which must be believed with divine and Catholic faith.” The equality of all human beings, affirmed by the Second Vatican Council of 1965, surely qualifies as one such non-negotiable belief. Similarly, even the Southern Baptists’ emphasis on the autonomy of local congregations hasn’t stopped it from disfellowshipping churches that rewarded known sex offenders with pastoral positions, not to mention churches that challenged the denomination’s anti-LGBT theology. Nothing is stopping the SBC, and other Protestant denominations, from imposing similar limits on the autonomy of pastors complicit in extremely influential bigotry, particularly since disciplinary action for racism is either implicitly or explicitly supported in such denominational statements as the 2000 Baptist Faith and Message and the Presbyterian Church in America’s 2018 Interim Report on Racial and Ethnic Reconciliation. In a sense, the open letter simply applies the same logic behind Crabapple Baptist Church’s decision to disfellowship Robert Aaron Long, the shooter in the Atlanta massacre that targeted Asian spa workers this past spring: if you worsen racist hatred, don’t expect to continue benefiting from a relationship with us.

Doing nothing about the relationship between pastors and senators has produced the horrifying escalation in anti-Asian incidents, but the harm is by no means limited to the suffering of hate-crime victims. Anti-Chinese Christian politicians continue to influence the Biden administration: the administration’s continued support for the neo-McCarthyite “China Initiative,” started under Trump’s Scripture-quoting Attorney General Jeff Sessions, unfairly targets Chinese nationals on suspicion of espionage. Biden’s misguided fixation with bipartisanship inevitably normalizes both the rhetoric and policies of zealots like Sessions. Hence, Biden’s April speech to Congress coupled his version of religious nationalism--emphasizing “restoring the soul of America”; waxing poetic about the “sacred right to vote”; calling for God to “protect our troops”--with lines that wouldn’t be out of place in a Mike Pompeo stump speech. Doubling down on Trumplike language of a trade war with China, Biden declared, “There’s no reason the blades for wind turbines can’t be built in Pittsburgh instead of Beijing.”

While such protectionism didn’t start with Trump, it certainly accelerated, and its current pride of place in the Biden Administration’s China policy is deeply alarming for the whole planet. Biden’s reluctance to work with China on climate change has already sparked a letter from some 40 progressive groups. The consensus that China’s repressive policies make the country singularly worthy of bellicosity is particularly striking in contrast with countries like Saudi Arabia, whose notorious human rights abuses have earned its Deputy Defense Minister a friendly visit to the White House. Can there be any doubt that this uniquely hawkish attitude toward China is inextricable from the constant Beijing-bashing of devout Republican politicians?

Demanding repentance and transformation from these politicians, as well as their putative shepherds, doesn’t have to entail minimizing the PRC’s serious human rights abuses. In fact, in pressuring churches to discipline the professional racists in their ranks, we are trying to rescue the moral standing of churches to speak to any abuse of human rights, be it in Xinjiang or Arizona. Religious institutions may not be responsible for everything a congregant says, but they must take action when that congregant has the power to weaken the credibility of Christianity, enflame hate crimes, and worsen international relations.

Lucas Kwong is a writer, musician, assistant professor of English at New York City College of Technology, and assistant editor for New American Notes Online. He’s written at his newsletter eschatontwist.substack.com; outlets such as Public Books, Red Letter Christians, Sojourners, The Revealer, and the Institute for Christian Socialism’s Bias Magazine; and scholarly journals such as Victorian Literature and Culture and Journal of Narrative Theory. He invites readers of any ethnic, religious, or national background to follow the open letter on Twitter @xenoseimi and join the letter’s 700+ signatories at againstchristianxenophobia.com.