Bernie Sanders’s Religion: A Theology of Us 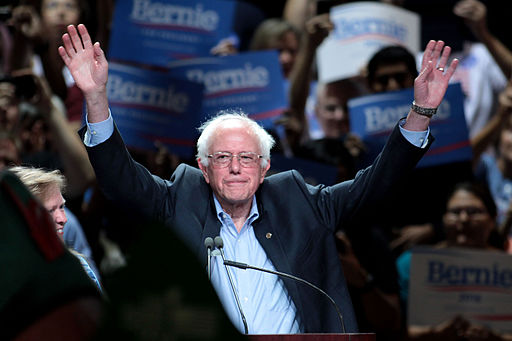 Bernie Sanders may not be “religious,” but his theology is in line with religious belief.

Religious rhetoric in presidential campaigns is a staple of U.S. political campaigns. Although some candidates have emphasized their religious convictions while others steered away from such declarations, all U.S. presidents have been at least nominally Christian, even though Jefferson and Lincoln never joined a church. Bernie Sanders has been reluctant to discuss in much detail his own religious convictions and his Jewish heritage. A few times during the campaign he has given voice to the subject.

In an interview with Jimmy Kimmel, Kimmel asked Sanders if he believed in God. Sanders did not respond directly to his question but instead spoke of the importance of responding to the suffering of others and how we are “all in this together.” Sanders went on to reference Pope Francis and state that we cannot worship “billionaires and the making of more and more money.” Aaron Blake, writing for the Washington Post in an article entitled “Bernie Sanders: Our First non-religious President?” described this response as a “dodge.” Blake characterizes Sanders’s response as, “It’s basically saying, ‘I’d rather talk about poor people than God.” What I find most amusing about Blake’s statement is that not only does Bernie Sanders prefer talking about poor people, so does God.

Blake’s superficial criticism of Sanders is just one example of a pervasive and ancient conflict within Western religion. On one side, religiosity is defined as doctrinal knowledge and purity. You are religious if you fulfill the appropriate obligations to the institutions of religion. The other side defines religiosity as serving the needs of community and our relationships. The prophets of the Hebrew Bible repeatedly condemn Israel not for failed doctrinal obligations but for neglect and even exploitation of the poor, the widow, and the orphan. Whether Blake and others realize it or not, defining Sanders as not religious for dodging “God” questions, assumes that the former definition of religiosity is the correct way to understand religion.

During a Democratic Presidential Town Hall on CNN, Chris Cuomo asked Sanders to explain what this togetherness is that he uses to describe his spirituality. Sanders responded with an answer that rivals any of the doctrinal sound bites of other candidates for theological and spiritual depth.

Every great religion of the world essentially comes down to “Do unto others, as you would like them to do unto you.”  That we are in this together. . . .[W]hen you hurt, when your children hurt, I hurt. I hurt. And when my kids hurt, you hurt. And it’s very easy for us to turn our backs on kids who are hungry, or veterans sleeping on the streets. And we develop a psyche, a psychology which is, “I don’t have to worry about them, all I’m going to worry about is myself, I need to make another five million dollars.” But I believe that [what] human nature is about is that everybody in this room impacts everybody else, in all kinds of ways that we can’t even understand. It’s beyond intellect. It’s a spiritual, emotional thing.

Many people would not recognize these statements as theology, but they are in fact thoroughly so. In one version of the creation story in the book of Genesis the Lord says that it is not good that Adam be alone. Therefore, the Lord creates a partner for Adam. What is compelling in this version and in the version in which God creates two humans at the same time is that God judges isolation and singularity as not good. God creates human beings to be in relationship. It is our nature to be-with others. We are fundamentally interconnected around the world. Repeatedly, great religious leaders from the Hebrew prophets to Jesus to Muhammad to Martin Luther King, Jr., call upon people to show faithfulness through acts of compassion and justice to the community and in our relationships.

Bernie Sanders the man is free to use any label or descriptor for his beliefs that he wishes. He chooses to call himself not very religious, although he did tell USA Today that “my belief in God requires me to do all that I can to follow the ‘Golden Rule,” and yet I see a very religious man. He need not be concerned about labels. We should recognize that if we are to call ourselves religious we must reclaim the word for justice, for peacemaking, for compassion, and for the fight to set free the oppressed. In the end, Bernie Sanders responds to the deep religious call to be faithful, not to doctrines or institutions, but to be faithful to the exact thing God wants us to be faithful to--each other.

John W. Adams lives in Tacoma, Washington, where he is the lead organizer for the South Sound DSA and works with developmentally disabled people.