Blood on the Robes: Buddhist Violence in the Cold War 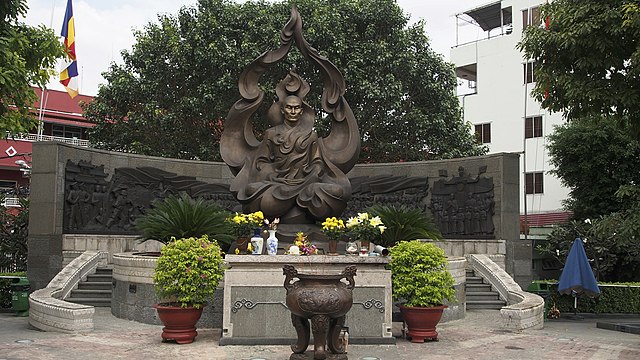 In the mid-2010s, when news came out of Myanmar about the participation of Buddhist monks in ethnic cleansing of the Muslim Rohingya people, many in the West were shocked.

They shouldn’t have been.

For all its pacifist teachings, Buddhism has a history of atrocity. Over the millennia—as with so many world religions—it has seen itself weaponized in service of terrible violence, often at the hands of political authorities vying to consolidate power. For Buddhist socialists, the role that Buddhists played in the widespread political violence of Cold War-era Southeast Asia is a particularly striking example. In this period, we saw two extremes in the actions of Thai and Vietnamese Buddhists. In Thailand, prominent actors within the sangha—the Buddhist term for a community of monastics and their lay followers—were complicit in the killing of communists and suspected communists, contributing to the anti-communist mass killings that occurred throughout the world in these decades. Meanwhile, in neighboring South Vietnam, Buddhist monks engaged in prolonged nonviolent resistance against the U.S.-backed authoritarian regime and the Vietnamese civil war.

From its beginning, Buddhism has had a relationship to political authority. The ancient Buddhists believed in two wheels of the dharma, or the Buddha’s teachings: one turned by the sangha, and the other turned by the Cakkavatti, meaning “Wheel-turning Monarch.” Early Buddhist texts present an ideal of Buddhist kingship, whereby a rightful ruler reigns in accordance with Buddhist principles and the sangha serves as an advisory body to the throne. The integration of the sangha into the feudal state can thus be seen as a marriage of spiritual and physical power.

In Buddhist legend, the Indian emperor Asoka serves as the exemplar of Buddhist kingship, with his rule being seen as the high-water mark of Buddhism on the Indian subcontinent. According to traditional belief, Asoka started out as a fierce conqueror who expanded his territory through slaughter, only to be shown the error of his ways by a Buddhist monk he had captured and tortured. The mythologized Asoka converted to Buddhism, vowing from then on to rule not by military might, but by living in accordance with the dharma.

Reality, as you might expect, differed. The historical Asoka hardly abandoned violence after his conversion to Buddhism; in fact, he patronized not only Buddhism, but all of the religions that were popular in his domain. The idealized symbiosis between the sangha and the state has never actually been achieved, and even in times of great cohesion, there have often been tensions between the two. These tensions have tarnished the legacy not only of the rulers, but the sangha as well, for they often motivated the sangha to eschew its teachings in favor of continued royal patronage.

Buddhism and authoritarianism in Thailand

The Thai monarchs modeled their rule on the archetype of Buddhist kingship. Early Thai rulers devised a tripartite nationalist ideology of nation, religion, and king—paralleling Buddhism’s Triple Gem of the Buddha, the dharma, and the sangha. When Thailand transitioned from absolute to constitutional monarchy in the 1930s, the monarchs were demoted to mainly ceremonial status and political power fell to military and economic strongmen. The sangha, on the other hand, flourished in the new balance.

Thailand had stood out during the colonial era as the only Southeast Asian nation that escaped incorporation into the Western empires; in the post-colonial era, it again distinguished itself as a firm ally to the United States and a sworn enemy of Marxism-Leninism. Thailand fulfilled that commitment to stunning effect. People who were suspected of being communists or sympathetic to communism—many of them ethnic minorities—were arrested, tortured, and killed by state security forces and state-aligned right-wing paramilitary groups organized under the Communist Suppression Operations Command (CSOC). In the infamous Red Drum Killings of 1972, at least 200 and up to 3,000 civilians accused of supporting communism were thrown into gasoline-filled oil drums and burned alive. Student pro-democracy demonstrators were massacred by the military in 1973 and again in 1976. Throughout the years of bloodshed, many leaders of the sangha, in tandem with the monarchy, remained staunchly committed to the regime’s defense, minimizing its crimes or even endorsing them outright.

Perhaps the strongest example of Thai Buddhists’ complicity in the reactionary violence of the era is Kittivuddho. Advocating for a holy war against communism in 1976, this ultra-conservative monk—known to his supporters and detractors as the “exterminator monk”—delivered an address titled “Killing Communists is Not a Sin.” Kittivuddho believed that the murder of communists did not violate the Buddhist precept against taking life because communists were not actually human beings, but beasts bent on destroying the Thai way of life. In his view, killing communists was not only morally sound, but the fulfillment of a spiritual and civic duty.

In South Vietnam, the story was far different. As in Thailand, South Vietnam’s government was a capitalist regime aligned with the United States. However, Vietnamese Buddhists in this period refused to condone violence. In fact, they organized a wildly popular—if extremely costly—campaign of nonviolent civil disobedience against the dictatorship of President Ngo Dinh Diem. They were enraged by Ngo’s alliance with America and support for war against the North, as well as his disdain for Buddhists and patronage of his fellow Catholics. Finally, in 1963, their anger erupted in protest against the president’s order to ban “the flying of any flag but the national colors of South Vietnam,” worsened by the fact that President Ngo had permitted Catholics to carry papal flags in blatant defiance of this order during the Silver Anniversary of his brother, Archbishop Ngo Dinh Thuc. In the city of Huế, 500 Buddhists paraded across the Perfume River to celebrate the Buddha’s birthday in direct violation of the order. State security forces violently dispersed the crowd, killing nine civilians.

Following additional crackdowns against Buddhists, monastic leaders and their lay followers organized a campaign of resistance utilizing non-violent tactics such as peaceful demonstrations and hunger strikes. Their most famous practice was that of self-immolation. On June 11, 1963, when the elderly monk Thich Quang Duc set himself alight on a crowded Saigon street, he created a moment in history. His suicide was only the first of many suicides-in-protest committed by Vietnamese Buddhists against the Ngo regime and, following Ngo’s ouster, against the civil war.

Through grit, determination, and sacrifice, the South Vietnamese Buddhists emerged as a potent force for the political opposition, though it cost them dearly. As such, their actions constitute a radical negation of the orientation that the Thai sangha took in the same period. They decided they would rather literally burn to death than forsake their commitment to unconditional nonviolence and unlimited compassion, and for that, they will be remembered.

Lessons for the future

The pressing question is this: Why did Buddhist leadership take such diametrically opposed stances with regard to state-sanctioned violence in Thailand and South Vietnam despite their common faith, regional proximity, and shared animosity toward communism? The obvious answer is that Thai nationalism empowered Buddhists, whereas South Vietnamese nationalism suppressed Buddhists. But beyond that, it is difficult to isolate a clean and clear explanation of Buddhist motives in this period, least of all because the Thai and Vietnamese sanghas of the time, like all religious communities in all times, were not monolithic. Not all of the leaders of the Thai sangha were extreme right-wing nationalists; this same time period saw liberal reformers and even leftist monks such as Buddhadasa, author of Dhammic Socialism. But it was those on the Right who had the lion’s share of influence in this period, owing to their collaboration with the military, the monarchy, and far-right militias. Similarly, Vietnamese Buddhists did not always remain committed to nonviolence. Street violence between Catholics and Buddhists occurred in outbursts throughout the period, such as in 1965, when ten thousand Buddhist civilians razed a Catholic village in what Time Magazine labelled an anti-Catholic pogrom. It must also be acknowledged that the Buddhist anti-war movement was rife with disunity, as there was precious little to unite the different Buddhist sects other than their shared contempt for the atheist communists in the North, the American puppets ruling in the South, and the Americans themselves pulling the strings.

As faith practitioners in pursuit of political power ourselves, how can we learn from the failure of our predecessors and honor the ultimate sacrifice of those who choose death over the abandonment of their ideals? To begin with, we can reaffirm our commitment against any and all nationalisms, particularly ethnic and religious nationalisms. Then, we can remember that integration of political and religious authority is a recipe for death, as either institution fatally erodes the legitimacy of the other. Finally, we can pledge never to allow the prospect of political gain to lead us astray from the tenets of our faith. If we view political expediency as an intoxicant like any other, we can guard against it and its pervasive influence on our decision making. We can do this by walking forward with intent, constantly mindful that there is a right and wrong way to seek power, permitting our faiths to always inform us—but never dominate us—in our lives as political organizers.

Ty Kiatathikom is a writer and political organizer based in the Midwest. His work centers on Buddhism, abolition, and democratic socialism.