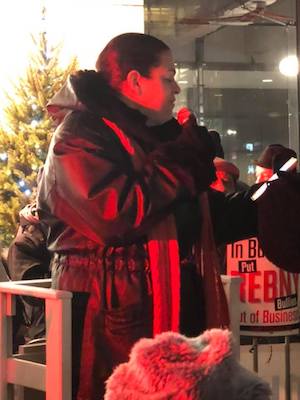 Psalm 127:1 (New American Bible Revised Edition) says, “Unless the Lord build the house, they labor in vain who build. Unless the Lord guard the city, in vain does the guard keep watch.” It is an admonition to accept that prosperity is the gift of God, not solely the work of the power brokers.

Again and again I ask myself, What does God wish us to build, and who does God want us to guard?

I asked this question to an assembly of clergy and religious leaders huddled together inside police barricades on an arctic January evening outside the New York Hilton in midtown Manhattan. There, the Real Estate Board of New York was holding a fundraiser dinner at five figures per table. The guests inside, who lobby state government, are the ones who write the rent laws.

How we wish for it to belong to the everyday people of the city, for they are, to use Jesus’ words, the salt of the earth and the light of the world. They have a right to safe and affordable housing. But over the last 25 years, New Yorkers have lost 300,000 units of affordable, rent-stabilized housing. Millions of residents have no protection as renters. Far from being blessed, the humble who Jesus promised would inherit the earth have been dispossessed in their own neighborhoods, simply because of their housing situation.

How we also wish for the city to belong to the homeless. Mayor Bill de Blasio pledged that 5 percent of the 300,000 new or preserved housing units his administration hopes to create would be given to the homeless. That’s only 15,000 units for a city with upward of 70,000 homeless residents on any given night. Can we not do better than this? A bill recently introduced by New York City Council Member Rafael Salamanca would require developments receiving city subsidies to set aside 15 percent of housing units for the homeless. The bill has gained enough co-sponsors to override a veto from the mayor, who opposes the bill on the grounds that it will impede efforts to construct affordable housing.

To which some of us would say, what efforts?

What have you been doing while residents are displaced from El Barrio in East Harlem; the South Bronx; Brooklyn; and soon, we fear, Inwood and Washington Heights?

What have you been doing while homelessness rises to unheard-of levels?

What have you been doing while rents for both residents and small businesses climb higher than the pencil-thin, supertall skyscrapers marring the Manhattan skyline and outpace any rise in wages?

What have you been doing for workers in the hospitality, retail, and service industries while emptying the public coffers for the world’s largest online retailer?

What have you been doing while members of our congregations lose their homes and their businesses?

There was a time when popular movements bent political will to converge with higher ideals to provide for the common good. That convergence created the Mitchell-Lama Housing Program in New York State for low- and middle-income tenants. That convergence, forged by a mighty tenant rights movement in the mid-20th century, created New York City’s stock of rent-controlled and rent-stabilized apartments. That housing stock is now at risk as never before in an era of reckless rezoning and hyper-gentrification.

Well, I haven’t given up hope. My hope is in God. God is Lord. The landlord is not God. The developer is not God. Realtors are not God. God is God and makes a dwelling place for all of us.

The members of my church and the people of my community haven’t given up hope. They are getting on a bus to Albany on Feb. 16 with a caucus of black and Latino residents to tell our state lawmakers to pass bills that finally will end unconscionable rent hikes and curb tenant harassment and unjust evictions. They are asking for protection of tenants from sudden and massive rent hikes when they renew their rent-stabilized leases. They are asking for repeal of vacancy decontrol, which allows landlords to take apartments out of rent regulation when a tenant leaves. They are asking for an end to the “statutory vacancy bonus” that gives landlords a 20 percent windfall every time an apartment turns over. They are asking for the annual increases in rent-controlled apartments, which can be pretty steep, to be brought in line with the more moderate increases in the separate class of rent-stabilized apartments.

And there are many other demands our people seek at this key moment as the rent laws expire. In short, our people are asking lawmakers to rewrite the rent laws that the Real Estate Board of New York has unjustly written in its own favor.

We also seek stronger action from city government. God has little patience for those whose love is lukewarm. The de Blasio administration’s half-hearted efforts to create more affordable apartments through the formula of Mandatory Inclusionary Housing relies on dubious metrics and wishful thinking. God does not want three houses for the rich and one house for the poor. Let us get on God’s side, stop fooling around with realpolitik and off-the-shelf rezoning plans, and build affordable housing for all God’s people in New York City.

To those who watch over the city, Mayor de Blasio and the City Council; and to those who watch over the state, Gov. Andrew Cuomo and the state legislature, we say, “Look over your shoulder. God’s eye is on you. If you do not learn to see as God sees, if you do not see the people as God sees them, you will bring ruin to them and shame on yourselves.”

Let us pray that our elected officials wake up, let go of their schemes, and preserve and protect our neighborhoods as we have asked them to do.

Ed. Note: NYC DSA is involved in the housing struggle as are chapters across the country. Check out your chapter for more information.

Photo courtesy of Northern Manhattan Is Not for Sale