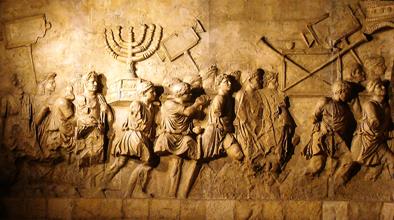 Chanukah is probably the best-known Jewish festival among non-Jews. In the spirit of a multicultural society it is mentioned along side other holidays celebrated in America. Unfortunately it is mostly presented as a Jewish opportunity for consumerism, one more reason to spend money many people do not have and give presents to people who do not really need or want more things.

It might be a surprise for many readers to learn that the celebration is commemorating a very different sentiment--that of freedom from oppression-- both from external enemies but also from internal economic oppression. We learn the historical background for the rebellion from ancient sources such as the books of Maccabees and the writings of Yosef Ben Matityahu (Josephus Flavius) the first-century historian. These sources tell of a Hellenist King in Damascus named Antiochus IV (164-175 BCE) who forbade Jewish worship and robbed the Temple in Jerusalem. He also intervened in the internal politics of Jerusalem and appointed lackeys to the position of High Priest in exchange for their help in Hellenizing the Jews. Rabbinic literature focuses on the religious pretexts to the rebellion, and commemorates the miracle in which after the liberation of the temple there was only one pure jog of oil left and it lasted for eight days instead of just one (167 BCE).

But historians add other aspects to the story of Chanukah: economy. The rebellion began with the leadership of the Hasmonean family, a family of priests from a small village. This family was not connected to the inner circles of priests and it represented the voices of the unheard masses, the peasants and small land owners abused by the Hellenist king and his minions who increased the tax rate in order to pay for his large army and reparations he owed the Romans. Chanukah therefore, is also a celebration of liberation from economic oppression, not only religious and political.

In the 19th century, the Jewish world started to contemplate the role of socialism in the Jewish political scene. This discourse created many different versions of Jewish socialism. Some promoted socialism that rejected national boundaries. Others created versions of socialism in which nationalism played a role, be it big or small. But in the Jewish community, there were also discussions about socialism and its relationship to religion. Religious Jewish socialists who rejected the Marxian concepts of religion tried to see find room for a socialism and religious utopia. Can the socialist vision of an equal society be integrated with the religious concepts of the messianic era?

One such thinker was Rabbi Yehudah Orlean. This gifted educator and prolific writer was the chief ideologue of a movement called Polalei Agudat Yisrael. It was a religious group that promoted socialism and social justice and gained significant following in interwar Poland. Orlean, before he perished in the Holocaust, wrote extensively about Judaism and socialism. In the 1930s, he published a book of his articles titled in Yiddish “Tzu zate und tzu hungeriker,” (To the Satiated and to the Starving). One of its most beautiful articles dealt with the question of the class struggle. He posed the question, how can a community of faith accept the concept of class struggle, which is so violent and sees the rich as the enemy? Orlean suggested that a community of faith cannot accept such an idea. He said that the class struggle therefore is not a war in which the poor take from the rich. It is not a mere struggle over property. Its real goal is a war of liberation. Not only the liberation of the poor, but also the liberation of the rich. In a society in which social justice is absent, both the rich and the poor suffer. Those who abuse the worker and deny the worker’s rights suffer a spiritual price. They lose part of their humanity. The class struggle that creates a more just and equal society liberates the rich as much as it liberates the poor.

DSA member Ilan Fuchs is a historian of modern Judaism and a visiting scholar at the University of Michigan at Ann Arbor.