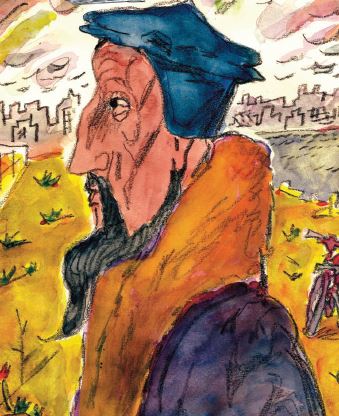 A Graphic Novel of George W. Mosse’s “Ideas Can Be Weapons”

George L. Mosse, magnum scholar of European cultural history and the rise of Nazism, later a famed scholar of the Gay Holocaust, was also a well-known lecturer at the University of Wisconsin-Madison and Hebrew University across more than forty years. Arriving in the United States in 1939 as a refugee intellectual, he sought to understand the origins of fascism, wrote a learned historical text as his first published volume, and wondered later why he had not returned in full force to its religious-historical themes.

Today’s readers of Ideas Can Be Weapons: George L. Mosse on the Puritan Tradition From Revolution to Empire (click the link to read the whole thing), will surely be struck by the immediate relevance of this deep dive into intellectual history. The manipulation of doctrine (that is, the Christian doctrine) by the powers of European settlement of the North American continent has a vivid connection to the rise of Trumpism and its partners in racist, misogynic doctrines from the grassroots of Neo-Confederate organizations to the heights of the Supreme Court. Mosse’s perceptions, illuminated here, allow us to see the logic of conquest for the “covenanted society” that believes it is entitled to impose its will upon its victims, over centuries of cruel misdevelopment. “Reasons of State,” the doctrine of the all-powerful, is more than relevant for the twenty-first century: it looms over us all.

Paul Buhle has collaborated on twenty nonfiction graphic novels [or comics], as editor or collaborating scriptwriter. Artist Nick Thorkelson, longtime community activist who has worked on campaigns for environmental and occupational health, tenants’ rights, youth empowerment, anti-imperialism, women's liberation, and economic justice, has been a political cartoonist in the Boston Globe and elsewhere. He wrote and drew a comic art biography of Herbert Marcuse and is now completing a comic art biography of the British utopian and designer William Morris. Scriptwriter Dave Wagner, a journalist who led the newspaper strike of the late 1970s in Madison and was the editor for politics and state and national government at the Arizona Republic, is co-author with Paul Buhle of several books on the Hollywood Blacklist.

For more commentary on Mosse and the book, read this interview with the authors and illustrator.