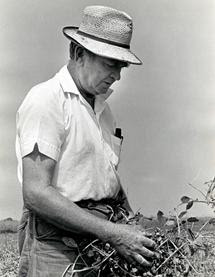 This year marks the fiftieth anniversary of the death of Clarence Jordan. In honor of Jordan’s distinctive vision of faith-centered egalitarian community—a vision that surely falls within the spectrum of religious socialism—RS offers (with the author’s permission) an excerpt from God With Us: Lived Theology and the Freedom Struggle in Americus, Georgia, 1942-1976 by Ansley L. Quiros. Here, Quiros describes the theological roots and communal practices of Koinonia Farm, which Jordan helped to found in 1942.

The Southern sun blazed down on the two men making their way across the scrubby soil of southwestern Georgia. It bore fiery witness as one man bent down, put his hands to the earth, grasped a handful, and let the parched dirt slide through his calloused fingertips. With a peaceful, sly smile, he turned to his friend and declared: “This is it.”

The man was Clarence Jordan, a Southern Baptist minister, farmer, native Georgian, and radical visionary. The place was 440 barren acres eight miles southwest of Americus, a small city in Sumter County. No one looking at the forgotten and dusty expanse of earth would have bet on Eden flourishing there. But it was a different sort of Eden that Jordan and his friend, Martin England, were pursuing.

Unable to resolve the teachings of Jesus Christ with the social customs of the time, Jordan and England sought to create a place where the doctrines of Christianity could be enjoyed in purity. They would call their theological experiment Koinonia Farm.  Koinonia means fellowship or communion in Greek, marking the farm as a space where a community could live and work out their beliefs about the Fatherhood of God, brotherhood of man, dignity of work, and fellowship of the Spirit together. As one Koinonia observer put it, “the ideas of the new Testament either had to be rejected or incarnated.”  Koinonia was to be this Incarnation.

Established as a “demonstration plot for the Kingdom of God” in 1942, Koinonia imagined itself as an embodiment of Christian theology. By its very existence, Koinonia would expose the hypocrisy of Southern Christians, speaking as they did of love and brotherhood while cruelly oppressing black people. Though often derided as radical, the Koinonians insisted that they practiced orthodox, biblical, even Baptist, doctrine, and that any radicalism belonged to Christ, not to them. Before the civil rights movement arrived in Americus, Koinonia Farm did; it was a prophetic “voice in the wilderness” in the segregated South. It was a voice that would be misunderstood and suppressed, at times heard only by the sun high above.

The theological experiment began haltingly. The Jordans and Englands moved onto the farm Christmas of 1942, and for months, Clarence and Martin sweated and toiled, planning the farm, planting trees, and repairing the dilapidated property. They raised the first building, affectionately dubbed the Treehouse, in the summer of 1943.  Though the Englands left to go back overseas, more people arrived, including Christian missionaries, ministers, and conscientious objectors.

By the time the farm was ready, there were eight people willing to formally constitute the Koinonia: Clarence and Florence Jordan, Howard and Marion Johnson, Gilbert Butler, Con and Ora Browne, and Norman Lory. These original eight pledged their “total unconditional commitment to seek, express and expand the Kingdom of God as revealed in Jesus Christ,” as they “joyfully enter[ed] into a love union with the Koinonia” and “gladly submit[ed]” themselves to it.

Koinonia members built and inhabited small wooden cabins on the property, sometimes sharing these humble lodgings among several families. They took turns cooking and ate most of their meals together in a common area. They met together daily for prayer and worship meetings, with Clarence often leading, but with everyone sharing testimonies and devotionals. Meetings to discuss farm and communal governance occurred frequently, as members voted on how money should be allocated and spent.  The Koinonians also worked diligently—farming, building, cooking, cleaning—often dividing tasks by gender.  A schedule from December 21, 1949, reveals the Koinonia daily routine: “6 A.M.: rising bell, 6:15–6:45: devotional, 8:15–11:45: work [“field work, cattle, poultry, building and maintenance, household work, and cultural”], 11:45–1:00: dinner, 1:00–4:30: work, 4:30–5:30: chores, and 6:00–7:00: supper.”  After supper, there was usually free time to read, socialize, sing, and relax, though some nights the members conducted business meetings during that time. The Koinonians worked together, ate together, worshipped and prayed together. They also experienced conflict and forgiveness.  There were certainly tense moments as individual expectations collided with the decisions of the group, but there were also easier moments of staying up late discussing nonviolence and eating popcorn. It was, to quote Dietrich Bonhoeffer, simply “life together.”

In the late 1940s and early 1950s, the Koinonia experiment thrived. Young people visited the farm in droves, with many opting to stay.  In the early 1950s, for instance, Claud and Billie Nelson found themselves captivated by Koinonia’s theological vision and decided to live there. “Our going to Koinonia Farm boils down to this,” Claud wrote, “if we believe in the Kingdom of God as taught and lived by Jesus Christ. . . . We must make a definite attempt to realize the ‘kingdom’—that is, to practice love as a way of life.” He continued, “We must relate everything we do—life, work, play, fellowship—to what we believe.”

Con Browne estimated that during these years the farm welcomed around 8,000–10,000 visitors annually. With the extra hands, Koinonia was able to expand its operations, raising poultry, peanuts, and pecans. The farm functioned well, and the soil, treated with care and diligence, began to produce. The Koinonians purposefully planted more fruits and vegetables than they could consume, enabling them to share the excess with their poorer neighbors. They even came up with the idea of a “cow library” in which they would rent out cows to other Sumter County farmers. When the cows were all milked out, they could trade them in for fresh ones. When Clarence realized that the local hens were underproducing eggs, he researched the issue, introduced a new breed of hen, and shared the excess eggs. At a local co-op, they sold them in egg cartons that spread Koinonia’s vision, symbolized by a white hand and a black hand clasped across the rippled cardboard.

[As an inter-racial community, Koinonia “rankled” its white neighbors, many of whom came to see the community as “a radical, subversive, un-Christian display of Southern heresy.” Despite legal injunctions, vandalism, a local boycott, shootings, and bombings in the late 1950s, “the Koinonians decided to stay.”]

Florence Jordan recalled, “there was never any feeling that we should leave. We knew we wouldn’t be the first Christians to die, and we wouldn’t be the last.” Even in the midst of violence and persecution, specific theological beliefs sustained the community. Rather than capitulate to intimidation and fear, the Koinonians steeled their resolve by looking to the example of Christ. Like Jesus, who was misunderstood and persecuted, the Koinonians had to be willing to endure scorn and derision for their radical message. Even oppression was incarnational. Not only did the Koinonians believe that they were like Christ in his suffering, but they believed that the resurrection of Christ transformed their suffering. “Jesus did not remain in the tomb,” Clarence taught, “so those who are seeking to follow His example . . . need not fear those who would kill the body, for they, like a mighty stream, cannot be stopped by barriers erected by men.” Christians, even when they suffered, would be victorious, as Christ was. As a letter sent to the Koinonians during this period declared: “What is success after all? When Jesus was nailed to the cross, who failed? We would say that his enemies failed.” In this way, the besieged Koinonia community found comfort and strength in their theology. A letter written during this period described a “real closeness” and “great joy” at Koinonia, as members shared in “glorious” times of worship together, singing “‘I Need Thee Every Hour’ and ‘Jesus, Keep Me Near the Cross’ completely unannounced.” The radical Christian orthodoxy of Koinonia both prompted its persecution and sustained its members in it.

Ansley L. Quiros is an assistant professor of history at the University of North Alabama, specializing in U.S. History, African American history, the history of immigration, and the history of race and religion.

(Image: Clarence Jordan at Koinonia, circa 1960. Used by permission of Koinonia Farm.)