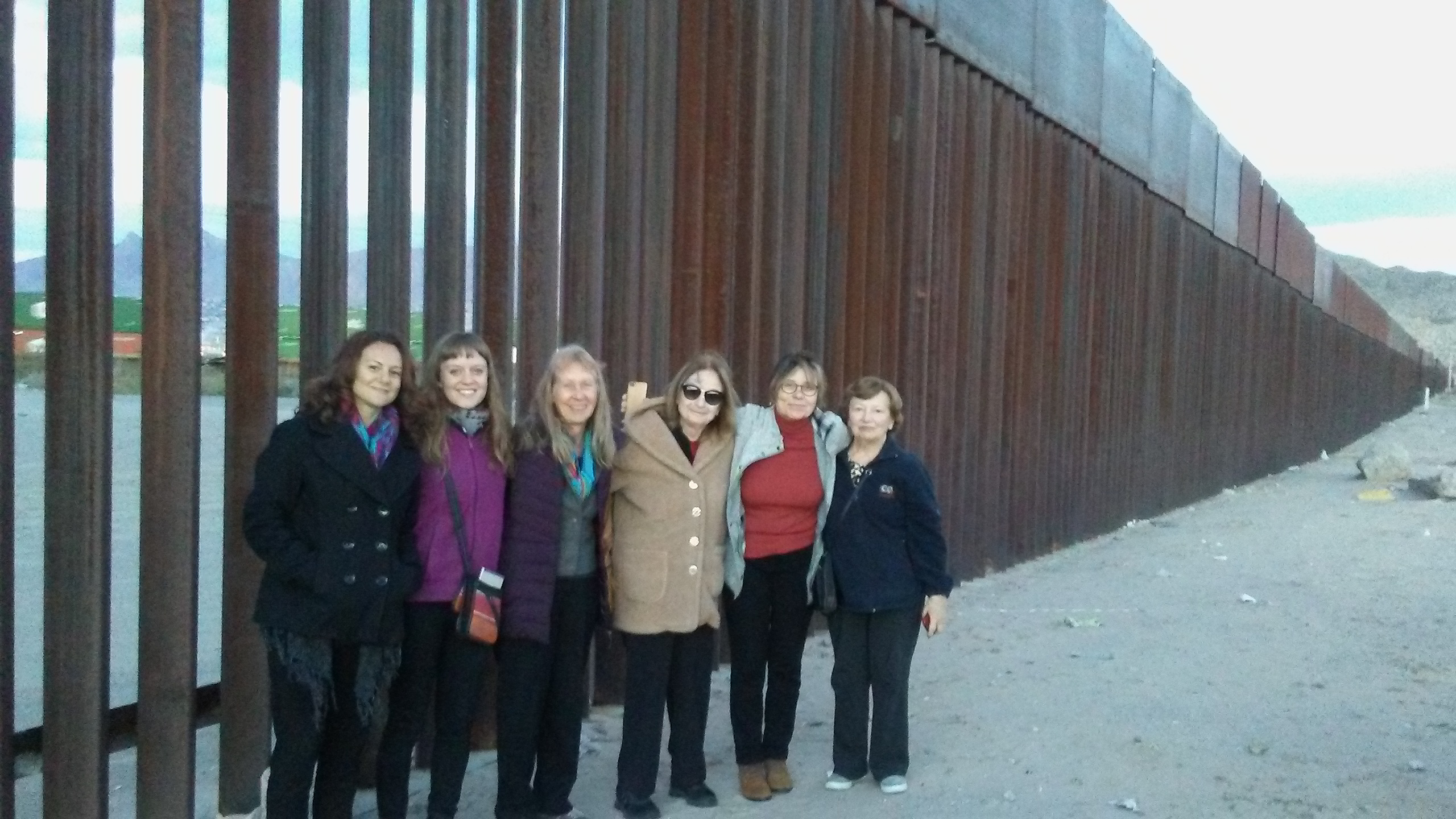 More than 800 churches are probably willing to offer sanctuary to undocumented refugees, but very few immigrants (perhaps a dozen or so nationally) actually go into sanctuary. “The fear is that they could be stuck in a church for years on end, or if their story is public, they may be more of a target,” Church World Service staffer Noel Andersen told a Reuters reporter a while back.

Although the movement that aids refugees uses the umbrella term of “New Sanctuary,” what many faith communities do can run the gamut from leaving water in the desert (for which some have been arrested) to feeding hundreds at outdoor soup kitchens to coordinating travel for asylum seekers to stay with relatives or friends.

Living in New Mexico since 2017, I have learned that the New Mexico religious community is involved in helping immigrants in many ways.

Faith leaders helped get the Albuquerque City Council to pass, and the mayor to sign, on April 24, 2018, a resolution that ensures that no city resources will be used to enforce federal immigration laws and that access by the Immigration and Customs Enforcement (ICE) office to city facilities will be limited.

The New Mexico Faith Coalition for Immigrant Justice, founded in 2009, aims to create "an environment that welcomes the stranger in our age and for generations to come." Its mission is to "collaborate with faith communities to create an ecumenical and inter-faith alliance in the state of New Mexico for immigrant justice." It seeks to educate the community about immigrant issues and provide compassionate services to immigrant families, advocate for humane immigration reform that promotes family unity and respects the inherent dignity of every person.

Religious institutions and individuals do not become members of this coalition, but rather volunteers and donors. Currently, many religious institutions and about 500 individuals are involved. Two faith communities offer sanctuary for people fighting deportation orders, two others offer housing for people who seek asylum, another offers support for transgender women who are leaving detention and are on their way to sponsors, and ten to fifteen people offer housing to asylum seekers. Others provide food, transportation, and moral and financial support.

Many asylum seekers released by ICE are on their way to live with a sponsor while their case is being processed. They pass through Albuquerque, El Paso, and other cities before going on to other parts of the country to live with friends or family members

Many Faith Coalition volunteers serve as court companions for immigrants who need to appear in court. In addition, they accompany people to their law-related appointments; witness and document ICE behavior whenever ICE is targeting people in the community; offer protection (sanctuary ) in places of worship to people in immediate danger of deportation; offer homes and meals to asylum seekers; accompany non-English speakers through airport security as they are on their way to their sponsors; help immigrants complete immigration forms; attend and hold educational sessions; and help transgender people get their rights. They work to collect and provide needed personal items such as soap, medications, and clothing.

The chief program officer of Catholic Charities recently solicited names of people who would be ready to provide meals for groups of sixty asylum seekers, as well as meals for smaller groups that would be released from the Cibola County Correctional Center pending their traveling to sponsors throughout the country.

A group of private lawyers, public defenders, and leaders from the Faith Coalition have drafted a petition to the New Mexico Supreme Court, requesting that a judicially issued arrest warrant be issued in order to detain a person on or en route to any courthouse in New Mexico. Too often, ICE makes street arrests of immigrants whom they suspect of being ineligible for asylum. These are immigrants for whom warrants have not been issued. Arrests without warrants violate peoples’ rights to petition the government, to be treated equally before the law, to due process, and to seek safety and happiness.

The Santa Fe Faith Network for Immigrant Justice is a grassroots collaborative of people of faith that has worked on local sanctuary organizing as well as collaborating with local allies to support transgender refugees released from the Cibola County Correctional Center. It holds educational events about immigration and transgender issues and has a legislative team that works collaboratively to advance pro-migrant legislation.

Reverend Tiffany Curtis, co-founder and lead organizer of the Santa Fe Faith Network for Immigrant Justice, emphasized, "We are a community organizing network. Although we have some immigrant leaders in our ranks, we are primarily a group of people who want to be allies to immigrants, so we take our cues from immigrant-led organizations and strive to support their priorities with the organized power of the faith community. We don't set our own agendas, but instead try to build capacity where it is needed."

Work similar to that done by the NM Faith Coalition and the Santa Fe Network for Immigrant Justice is done throughout the nation by The New Sanctuary Movement, a loose coalition of faith groups and activists.

In early December 2018, as a Faith Coalition volunteer, I was part of a four-day immersion program sponsored by the Faith Coalition that visited the border towns of El Paso, Texas, and Juarez, Mexico. This program is designed to help volunteers become aware of the conditions of immigrants at and near the border, as well as what officials and volunteers are doing. It is also a way to recruit more volunteers to stay to help at or near the border for a few weeks.

We stayed at the Iglesia Luterana Cristo Rey, a Lutheran immigrant church in El Paso that houses and feeds asylum seekers as well as people volunteering to help them. Examples of help provided by volunteers in the border immersion project include providing food, translation, English classes, and staying with those who are waiting to travel to sponsors.

In El Paso, shivering in an unheated outdoor tent, I listened to Ruben Garcia describe the situation for refugees. Garcia is the founder and head of Annunciation House, which opened in 1978 and serves the poorest of the poor in the El Paso-Juarez community. He spoke of immigrants being unable to get services from most established social agencies and living with constant fear of being deported or unable to gain status as asylum seekers.

The tent we were in served as a dining hall for asylum seekers who were being housed in an adjacent motel that has no space to serve meals. We learned that 2,000 asylum seekers a week were being released by ICE, and that Annunciation House scrambles to get temporary housing for them while they also arrange (and sometimes pay) for transportation for the asylum seekers to get to their sponsors. The proceedings started in El Paso will follow (on line) the asylum seekers to the areas in which their sponsors live, as they process their asylum cases. Annunciation House seeks and accommodates volunteers for a minimum of two-week stays. In Juarez, we not only saw a metal-slat wall along the border but saw the train on top of which some immigrants climb to get to California, where they believe their plight will be easier. We met with squatters who had come to Juarez to get a better education for their children, and who lived in minimal homes ( a step above shacks) for about 30 years without electricity, water, or a sewage system. They now have city services, although their housing continues to be sub-par. They benefit from a simple library paid for by a Kansas Catholic church that also supplies books that the children need for their school work. This library, however, has no computers (nor does it have internet connections), and the children have to go to the public library to use computers for their school work at the cost of $1 per hour!

Meeting with immigrants in both Juarez and El Paso, I was horrified at the way they were treated once they came to Juarez and this country. And I was overwhelmed by the support they are given by the religious community in both cities, as well from the distant church in Kansas.

Rev. Judith Deutsch is a Unitarian Universalist minister emerita and former chair of the Religion and Socialism Commission of DSA who is active in the Faith Coalition for Immigrant Justice.

(Photo courtesy of the author.)