Finding God’s Will In the Bible Belt 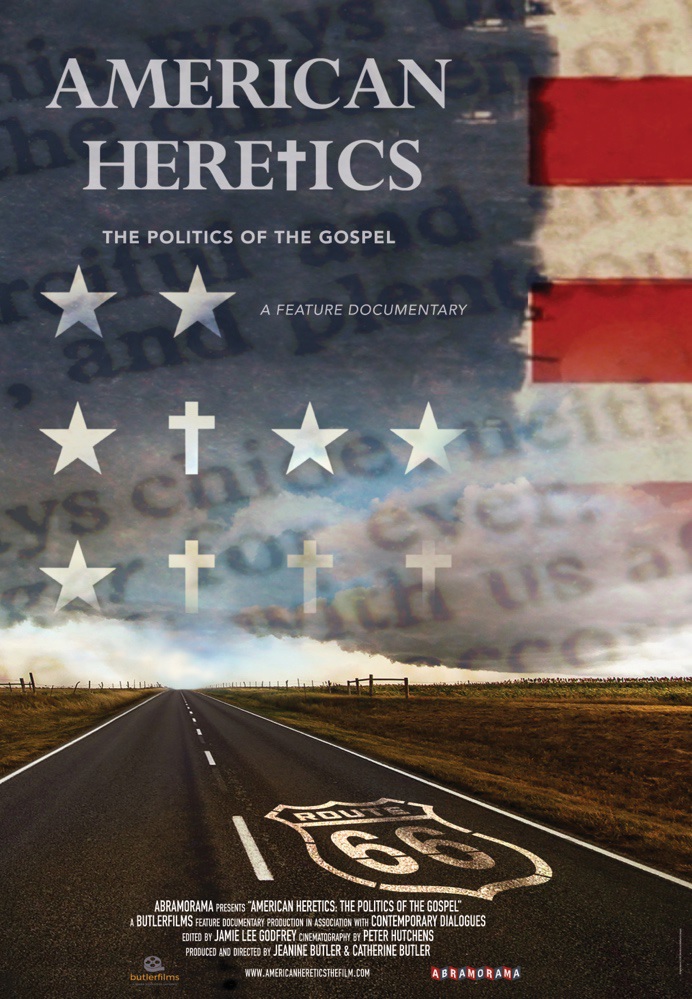 American Heretics: The Politics of the Gospel, a documentary directed by Jeanine and Katherine Butler, seeks to offer both a complication of and an alternative to the easy geographies of U.S. faith. Amid weather-worn signs for Donald Trump, dial 855-FOR-TRUTH billboards, a Gunworld, and a church nestled in a strip mall, in the Oklahoman Bible belt, the filmmakers follow two flourishing progressive churches—Mayflower Congregational UCC Church and All Souls Unitarian Church. American Heretics argues that these liberal churches are more faithful to the roots of Christianity than conservative evangelicalism and may represent the future of the faith.

Through interviews with the pastors and a collection of scholars, the film examines both the larger Oklahoman context and the longer history of the Christian faith. Oklahoma’s communal crises, from ecological devastation to the opioid epidemic, continue unabated in spite of its large number of churches. As Reverend Robin Meyers of Mayflower Church states, “[Oklahoma] has more churches than almost anyone but some of the worst social statistics in the country—teen pregnancy, addiction, domestic abuse…That tells you something is really wrong with our whole approach to religion.” Both churches provide an alternative to a conservative faith that does little in the face of manufactured suffering.

Instead of focusing on souls, both progressive churches are defined by a dual vocation: hospitality and resistance. In Oklahoma City, Mayflower is the first congregation in Oklahoma to declare itself a sanctuary church. Witnessing the fallout from oppressive immigration and economic policies, the congregation participates in rallies for minimum wage increases, protests a Department of Homeland Security facility and indicates members’ willingness to go to jail for their undocumented neighbors. After merging with a black Pentecostal church, All Souls Unitarian Church grapples with its own participation in a long history of racist violence in Tulsa (a former member helped incite the massacre of Black Wall Street in 1921). In two emotionally powerful moments, Bishop Carlton Pearson of All Souls and Reverend Lauri Allen Walke of Mayflower reflect on conflicts with the conservative communities that raised and formed them. Pearson, a former protégé of televangelist pioneer Oral Roberts, shares about his excommunication from the Joint College of African-American Pentecostal Bishops after preaching that God would not send anyone to hell. Walke’s grandmother worries that her granddaughter might be damned because of her support of LGBTQ+ causes. Each of their conversions to a more inclusive faith came with costs.

Reverend Meyers of Mayflower provides the frame for the documentary, stating that he is “not in favor of partisan politics in the pulpit. I’m not in favor of telling people who to vote for or what side of an issue God is on… there is however a politics of the gospel.” Distinct from electioneering, the “politics of the gospel” means embodying Christ’s call to forgiveness, compassion, and love of enemy. More than believing the right doctrines, faith is a praxis that seeks to make your community more just and livable. For both churches, this means fighting for immigrants, religious tolerance, LGBTQ+ advocacy, and racial justice.

Regarding Christianity’s past, the film engages in historical spadework, discussing the formation of the canon, how the United States was not founded as a Christian nation, the Southern Strategy and white backlash to the Civil Rights Act, slavery, women in ministry, and a lot more. The core historical argument of American Heretics is that the history of Christianity is messy and human, but progressive Christianity is more faithful to the teachings of Jesus than its conservative and fundamentalist counterparts. The film is ambitious and provocative, but the grand tour of history is odd in what it omits. For its contemporary history, the film only focuses on the political formation of the Religious Right and doesn’t narrate the traditions (e.g., the social gospel or the black church) that inform Mayflower and All Souls. While American Heretics is concerned with demonstrating that progressive churches are more faithful to Christianity’s roots, it makes it seem as if they have emerged ex nihilo from the U.S. landscape.

By the end, it was difficult to distinguish the argument of the film from the argument of the individual ministers. Pastors from both communities provide prescriptive forecasts for the U.S. church, arguing that “churches like All Souls and Mayflower will be the premier megachurches in the next ten years.” Claiming that a “politics of the gospel” is a guaranteed church growth strategy was a confusing closing theme. Progressive faith communities are beautiful and necessary in Oklahoma, clearly embodying that while God doesn’t choose a political party, God does choose sides—siding with the poor and oppressed. Yet in my hometown, Chicago, there are so many progressive churches to choose from that many are closing. With this, American Heretics freights progressive churches that embody the “politics of the gospel” with more hope than they can carry.

Trump and conservative Christianity may be the obvious antagonists to these liberal communities, but there are deeper conflicts. Often, self-described social justice churches are symptom-obsessed, dealing with the effects of capitalism rather than the political economy that is the cause. The film is haunted by the institutions primarily responsible for the suffering these churches hope to address. In one moment, while panning across the state capitol building, the name of companies that donated to help build its dome move across the screen: Halliburton, Phillips Petroleum, Hobby Lobby.

Alternative communities of faith are necessary, but a more progressive church isn’t a sufficient response to the suffering wrought by racial capitalism: America doesn’t just need liberal churches, it needs leftist churches. Beyond the “politics of the gospel,” churches need to identify capitalism as the source of oppression and partner with organizations that strike at the power of the institutions that sustain it, such as building power with labor unions or working to forgive the debts of congregants. Liberal Christianity suffers from too small an imagination and an inability to identify the true enemies that confront the work of the church. The social progress that liberal churches seek isn’t synonymous with the justice God and the Scriptures call for. As John Macquarrie, a Scottish theologian, says, “Radical theology is a theology of revolution, and in that respect contrasts rather sharply with liberal theology, which is much more a theology of evolution.” Acts of charity and piecemeal reform don’t deal with the root of inequality.

A more faithful hope for the church’s work doesn’t involve tinkering on the margins of injustice, but rather what Paolo Freire calls “the creation of a world in which it is easier to love.” Beyond seeking a limited progress, churches can work for a new way of structuring our life together— and that new way is socialism.

American Heretics is interspersed with shots of birds both flocking and flying, moments of fluidity and community. There is a metaphor here, a sense of what these two churches hope for. The flocks embody a freedom, a beautiful movement of communal togetherness over a scarred landscape. At its best, churches can be places where a loving life together and deep freedom are still possible. At a time when the Religious Right often vacuums up coverage and attention, the stories of Mayflower and All Souls are important, but they are not enough. A liberal “politics of the gospel” is not enough. Let’s not insult God with too small a set of hopes.

Adam C. Joyce is the Assistant Director of the Axelson Center for Nonprofit Management. He has directed communications for Chicago political campaigns and written for Sojourners, Institute for Christian Socialism, Geez Magazine, Christian Century, The Other Journal, and numerous other outlets.