From "Lord of the World" to the "People's Pope" 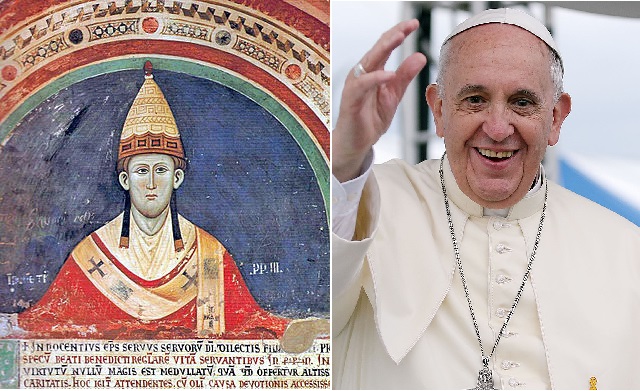 The history of the Catholic Church offers us holy and decadent popes, mighty emperors, cold cardinals and corrupt kings, martyrs and missionaries, angels and devils, nuns and monks, heretics and saints, sinners and converts, inquisitors and witches. Rome and Jerusalem connect the Roman Catholic Church with antiquity. Being part of a worldwide religious movement and a member of an organization 2,000 years old should give the believer a powerful spiritual and all-embracing feeling. We saw a glimpse of that during Pope Francis’s recent visit to the United States, where he was enthusiastically greeted by believers and non-believers alike.

For a church battered by scandal and internal dissension, the visit was a triumph. Watching the news, I thought of another pope, 800 years ago, who worked hard to win acceptance for the supremacy of the papacy.

Innocent III (1198-1216) convened about 1500 bishops, abbots, priors and representatives of kings at the Fourth Lateran Council in November 1215 to assert his power. He wanted the Church to be above all others, the only arbiter and sole holder of the power of God. That ambition caused many to call him “Lord of the World.”

At the council, considered the most important before Trent, dogmas of faith were affirmed and disciplinary norms established that are still valid today, such as going to confession and taking communion at least once a year. At the same time, the council decreed that Jews and Muslims should wear a special dress to enable them to be distinguished from Christians.

Church history tells us that Innocent III lived up to the Corporal Works of Mercy at least as far as his own people were concerned: to feed the hungry, to give drink to the thirsty, to clothe the naked, to harbor the harborless, to visit the sick and to ransom the captive. Innocent III even added a seventh work: to bury the dead, which was important in a time of plague.

The pope, however, made a lot of enemies on his way to his religious and political goals. He excommunicated King John of England and opposed the Magna Carta, which in 1215 was agreed between King John and his rebel barons and has become a potent symbol of liberty and the rule of law. Innocent III’s resistance to it caused a civil war in England. The pope was also responsible for one of the many painful examples of intolerance: the persecution and extermination of the Waldensians and Albigensians. Moreover, his name is connected with the slaughter of Béziers: “Soldiers of Christ, get up! Exterminate this godlessness with all means which God gives you. Get the heretics harder than the Saracens, for they are much worse.” When asked how they could distinguish the heretics from true Catholics, the papal envoy supposedly replied, “Kill them all, God will recognize his own.” Sadly, twenty thousand citizens were massacred.

History records an encounter between Innocent III and Francis of Assisi in 1210. Innocent first threw the beggar out, but Cardinal Hugolinus urged the pope to speak again with Francis. He then gave Francis permission to start his Order.

Fast forward to our own era and we find the first pope to take the name of the unassuming but charismatic St. Francis. Pope Francis has a magic gift to connect with people and, although he does not have the temporal power of many of his predecessors, his words do make a difference politically.

I saw him for the first time on May 4, 2013 on the steps of the Maria Maggiore in Rome. The time is seared in my mind because at that moment, in my homeland, everyone was observing two minutes of silence in commemoration of the dead of the Second World War. I thought of Pope Pius XII, who was silent when he should have spoken.

And now, although Europe is not at war, it faces the consequences of wars in other places, and this pope does not remain silent. During his weekly Sunday prayer in St. Peter’s Square, Francis proclaimed, “In front of the tragedy of the tens of thousands of refugees escaping death by war or hunger, on the path towards the hope of life, the Gospel calls us, asks us to be neighbors of the smallest and most abandoned.” Francis continued: “To this end, with the nearing of the Jubilee of Mercy, I address an appeal to the parishes, to the religious communities, to the monasteries and sanctuaries of all of Europe to express the concreteness of the Gospel and welcome a family of refugees.” The Papal Messages for the World Day of Migrants and Refugees express a culture of acceptance and solidarity. It sounds logical and human, but it is hard to swallow for conservatives inside and outside of the church. On this matter, the pope shows moral leadership that political leaders lack. It seems that the faithful long for this “People’s Pope. “

Harry Peer is a journalist from Amsterdam. A longer version of this article appeared in Dutch on the site Solidariteit: http://www.solidariteit.nl/extra/2015/paus_franciscus_corrigeert_onbarmhartige_voorganger.html and was translated by Harry Peer into English.