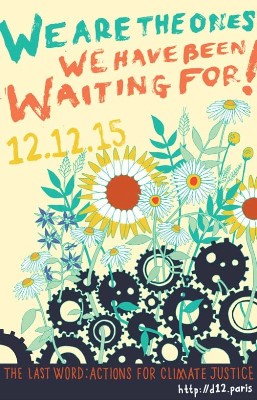 On the morning of November 29, thirty of us walked the mile and a half from Monument Square in Concord, Massachusetts to the site of Henry David Thoreau’s cabin on the forested shore of Walden Pond. After each of us spoke about why we were there, we headed back to Concord for a climate justice rally with 250 others.

The skies were clear, the air brisk and clean, the trees still in leaf, and Walden Pond still clean. It may have been an incongruous place to protest the consequences of global climate disruption, but it was not our little corner of paradise that we were defending.

On that same day, marches and rallies for climate justice mobilized some 700,000 people in hundreds of cities on every continent. For one day the world spoke with a single clear voice, demanding that governments make the drastic cuts in carbon emissions required to preserve even the possibility of a decent human future on this planet. This year’s Global Climate March was to have taken place in Paris, to demand that the world leaders assembled there to open the current round of climate talks agree to take the drastic measures required to prevent the worst consequences of global climate disruption.

Our Concord march began and ended a few hundred yards from North Bridge, where 240 years ago Massachusetts town militiamen confronted and repulsed a large British expeditionary force, launching the war of American independence. The obelisk around which we rallied contained the names of hundreds of Concordians who died in the U.S. Civil War, recalling to us how Thoreau and other Concord townspeople harbored fugitive slaves on their way to Canada, and how Thoreau, a radical abolitionist, spoke out in defense of John Brown’s raid at Harpers Ferry.

Our march and rally were not based on nostalgia but on the determination to demonstrate our solidarity with the most vulnerable peoples throughout the world whose lives, livelihoods, and children’s futures are most at risk from global climate disruption.

Our keynote speaker, Wen Stephenson, lives in Wayland just on the other side of Walden Pond. His short talk was on the theme of his recently published book, What We Are Fighting for Now Is Each Other.

What can we do, given that only a huge and transformative movement for climate justice can preserve even the hope of a viable human future on an increasingly hot and stormy planet?

Wen invoked the moral and spiritual values common to all humanist and religious traditions: faith, hope and love. If we remain faithful to the people and to the world we love and hopeful that we can overcome entrenched power, we have the potential to act together with passionate love.

As I watched the people from Concord and nearby towns at the rally, their faces, homemade placards and words expressing their commitment to the most inclusive social and environmental justice, I myself felt reinvigorated by a resurgence of faith, hope, and love. We are a present-day manifestation of the people who fought and often prevailed against overwhelming odds in centuries past.

And we are not alone. This has to be a beginning, not an end.

Although major climate disruption can no longer be averted, the worst effects can still be mitigated if governmental authorities commit to replacing fossil fuels with renewable energy systems in the shortest possible time. The Paris talks are the twenty-first in a long and mostly futile series aimed at producing such a global commitment. Global cooperation is blocked by the entrenched power of the giant fossil fuel industries that exert enormous influence over global economic and political systems. Only a massive and coordinated upsurge from below can overcome that resistance. And it has to happen soon.

In the United States, the opposition to any serious global agreement for climate justice is powerful and determined. The Republican majorities in the U.S. House and Senate insist that they will not allow a dollar of taxpayers’ money to be spent on assisting developing countries to develop renewable energy systems. They are trying to overturn limits on polluting fossil-fueled plants.

If it were not enough that the Republicans are obstructing the ability of the Obama administration to make even voluntary commitments to a global climate agreement, that same Obama administration is insistent on ratifying a Transpacific Partnership Agreement that would cripple the power of any government to enforce environmental laws that would crimp corporate profits. [See analysis by the Sierra Club here.]

Yet something useful may come out of the current round of talks in Paris. Although there can be no binding and enforceable global agreement because of climate change denying Republican legislative majorities, global political leaders will make promises to reduce carbon emissions. These promises may or may not be kept. Whether or not enough is done to salvage the future of humanity on this planet depends on us, not on them.

A new opportunity to demonstrate that we love and care for humanity will be on December 12, the day after the Paris talks are scheduled to end. Again the French authorities have banned the planned mass march in Paris, and once again 350.org and other global climate organizers are calling for actions throughout the world.

Wherever you are, some event will occur in your area. Be there. Wake up, show up.

Paul Garver lives in Acton, Massachusetts (almost as close to Walden Pond as Wen Stephenson) and regularly swims and walks there in company with the spirit of Henry David Thoreau. Like Stephenson, he and his wife Willy are members of the Open Meadow Zen sangha in Lexington, Massachusetts. Paul is a retired local and global labor activist, very active in political life and specifically in DSA. He agrees with Stephenson that only morally and spiritually grounded mass social movements are capable of transforming human society deeply enough to preserve the possibility of climate and social justice for future generations.