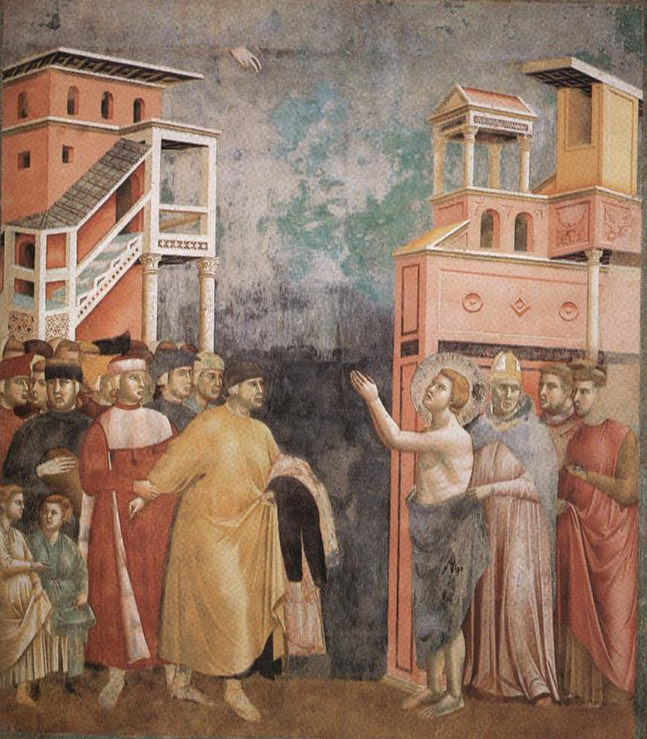 Pope Francis signed his latest encyclical, “Fratelli tutti,” at the tomb of Francis of Assisi, the saint whose name the pontiff took. We know a great deal about Francis of Assisi, as his followers created a significant paper trail. But it’s the legends that make people fall in love with him.

My favorite: Francis was the son of a wealthy cloth merchant and appropriated some of dad’s wares to finance the rebuilding of a church. Pietro Bernardone flew into a rage and demanded Francis make restitution. Francis disrobed completely and handed his clothes to his father. The eloquence of the gesture is extraordinary. Francis set himself free from material things, so frequently an impediment to answering God’s call. Francis was an all-in kind of guy. And so is his namesake.

Fratelli tutti, or “Brothers all,” (I’m told the original Italian is more gender inclusive) is a phrase taken from the Admonitions of St. Francis. The encyclical is a cri de coeur in which the pope lambasts the evils of this perilous time and lays out a vision for a better world based on an embrace of human solidarity. He decries capitalism, a system whose failure, he writes, has been exposed by the pandemic; social media and all the false intimacy and real hostility that comes with it; governments’ suicidal non-response to climate change; capital punishment; and nuclear weapons – even going so far as to challenge the “Just War” theory long taught within the Roman Catholic Church. It is long, as encyclicals go, and this reader got the impression that the  Holy Father could not stop himself, that he felt the misery and darkness of this world so keenly that he needed to howl for pages on end. That is what I imagine Francis of Assisi would do in 2020. Though he is reduced to a garden center saint, the patron of bunnies and peonies, Saint Francis began his ministry calling the world to repentance and never ceased.

Pope Francis makes a similar call in the latest encyclical. Capitalism is among the errors humanity is urged to repent. He writes:

The world was relentlessly moving towards an economy that, thanks to technological progress, sought to reduce ‘human costs’; there were those who would have had us believe that freedom of the market was sufficient to keep everything secure. Yet the brutal and unforeseen blow of this uncontrolled pandemic forced us to recover our concern for human beings, for everyone, rather than for the benefit of a few. Today we can recognize that ‘we fed ourselves on dreams of splendour and grandeur, and ended up consuming distraction, insularity and solitude. We gorged ourselves on networking, and lost the taste of fraternity. We looked for quick and safe results, only to find ourselves overwhelmed by impatience and anxiety.’

Nothing could be more traditionally Christian than socialism. Acts 2:45 tells us that the first Christians “sold property and possessions to give to anyone who had need.” Roman Catholics who wish to wholly devote themselves to God have always been drawn to religious communities that share the fruits of their labor and eschew the accumulation of wealth and goods.

The saints call eternally for economic justice. “The bread you do not use is the bread of the hungry,” said St. Basil the Great. “The garment hanging in your wardrobe belongs to him who is naked. The shoes you do not wear are the shoes of those who are barefoot. The money you keep locked away is the money of the poor. The acts of charity you do not perform are so many injustices you commit.”

Nevertheless Pope Francis’s statement is a turnabout from a long line of popes who issued encyclicals warning of the dangers of communism and socialism alike. And Pius XI and XII, both of whom railed against those dangers, will be remembered most not for what they opposed, but for what they failed to oppose: Adolf Hitler and the fascist next door, Benito Mussolini.

Instead, Francis expands the parameters of Pope Leo XIII’s 1891 pro-labor encyclical against capitalism. Will U.S. Catholics heed it?

U.S. Catholics who are registered voters are fairly evenly divided between the Republican and Democratic parties.  In 2016, white non-Hispanic  Catholic voters supported Donald Trump, by a two-to-one margin, support that some polls show decreasing in 2020. Donald Trump is in direct opposition to almost everything I believe as a Roman Catholic. That’s what I feel in my heart, and that’s what I read in the subtext of nearly every line of Fratelli tutti:

The best way to dominate and gain control over people is to spread despair and discouragement, even under the guise of defending certain values. Today, in many countries, hyperbole, extremism and polarization have become political tools. Employing a strategy of ridicule, suspicion and relentless criticism, in a variety of ways one denies the right of others to exist or to have an opinion. Their share of the truth and their values are rejected and, as a result, the life of society is impoverished and subjected to the hubris of the powerful.

The loneliness, fear and insecurity experienced by those who feel abandoned by the system creates a fertile terrain for various ‘mafias’. These flourish because they claim to be defenders of the forgotten, often by providing various forms of assistance even as they pursue their criminal interests. There also exists a typically ‘mafioso’ pedagogy that, by appealing to a false communitarian mystique, creates bonds of dependency and fealty from which it is very difficult to break free.. .

. . .Certain populist political regimes, as well as certain liberal economic approaches, maintain that an influx of migrants is to be prevented at all costs.

The chasm between the Vatican and the White House is wide. Pope Francis recently refused to meet with U.S. Secretary of State Mike Pompeo. Former Trump associate Steve Bannon has set up camp in Italy to run an institute bankrolled by conservatives and dedicated to undermining Pope Francis.  Bannon accuses the pope of being wildly liberal. Alas, he is not. We will not see women’s ordination or marriage equality under this papacy. But Francis is something even more dangerous to the likes of Bannon and Trump: authentically Christian.

The pope’s meaning throughout the encyclical is clear: Donald Trump has worked against human solidarity to create an immoral administration that is a threat to the hopes of the people of God and to all of humanity. People of good will may differ over many things when it comes to politics. But it is unjustifiable to vote for Donald Trump. The Catholic magazine Commonweal recently urged readers not to vote for Trump in an editorial simply titled “The Worst” and followed up by running a Timothy Snyder essay stating: “To vote for Trump is to give away something of yourself that you can never recover, the dignity of a citizen of our republic.”

That’s awfully close to saying that it is a sin to support Trump. Progressive Catholics tend not to use the “s” word very much, because it is associated with a judgment and narrowness. But there is such a thing as sin, a willful act against what we know to be right and good. Thank God that the Holy Father is calling out the sins of our economic and political system. May all my sisters and brothers in Christ heed him. We U.S. Americans are wary of religious leaders wading into politics. But that train left the station long ago, as some evangelical Christians have propelled Trump and his ilk to power. It is time to speak up in our public life for a brand of Christianity that is centered on Christ, the person who broke bread with the disreputable, fed the hungry, and said next to nothing about sex.

Perhaps a Pius or two is spinning in his grave over Fratelli tutti. You don’t advance an institution by publicly opposing the most powerful man in the world. This is bad strategy, something Francis of Assisi loved. The saint repeatedly made decisions that undermined the growing power of his order and himself. He preferred to act as “God’s Fool.” Like so much about St. Francis, this is wonderfully paradoxical. At first blush, it seems he’s given himself a humble title, but what honorific could possibly be greater?

Colleen Shaddox is author, with Joanne Samuel Goldblum, of the forthcoming Broke in America: Seeing, Understanding and Ending U.S. Poverty. She is also an activist working to reform the criminal legal system.