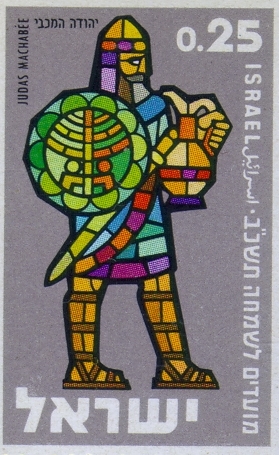 Portrayals of the Jewish holiday of Hanukkah—a commemoration of the re-dedication of the Temple in Jerusalem during the Maccabean Revolt against the Seleucid Empire—tend to be polarized. The most common experience of Hanukkah is still probably the one created about a century ago, a celebration which apes the mood and some of the customs of Christmas as part of an explicitly assimilationist project. The other, sometimes tied to Zionism and sometimes merely a form of intellectual contrarianism, emphasizes that Hanukkah arose precisely as part of a violent struggle against assimilation, and so ought to be the most uncomfortable of holidays for American Jews. In truth, the holiday’s origins are more complicated than either of these portrayals would have it. Hanukkah was the product not just of a revolt against empire, but of civil war—and its legacy points to the dangers which inhere in every attempt at revolution. The subsequent fortunes of the Maccabees, the leaders of this revolution, provide a striking illustration of the ways in which revolutionary moderation can become reaction, and post-revolutionary regimes so often become mirror images of that against which they have struggled.

In the second century before the common era, Judea was ruled by the Seleucid Empire, one of the successor states to the short-lived conquests of Alexander the Great. This empire was Hellenistic—most of its inhabitants were not Greeks, but the Greek language, culture, and forms of government became dominant among its various peoples. It was this process of Hellenization which touched off the events leading to the revolt, different sections of the Jewish community having very different ideas about to what extent it was appropriate to adopt the customs and lifestyles of their rulers. While traditional Jewish accounts portray the revolt as a direct response to unprovoked persecutions by the Seleucid ruler Antiochus IV (banning such central practices as Sabbath observance and circumcision), modern scholarship is more circumspect, seeing the conflict’s origins as intra-communal: what became a revolution against the imperial rule against the Seleucids began as a civil war in the Jewish community. But it is important to note that this conflict was not simply one between pro- and anti-assimilationist factions; rather, it was between moderate and extreme versions of assimilation.

Those siding with the Seleucid government can be seen as representing an extreme form of assimilationism. Jewish men belonging to this faction went so far as to undergo surgical procedures which appeared to ‘reverse’ their circumcisions, rejecting the most visceral and embodied forms of Jewish difference and evincing a desire to blend into the hegemonic culture entirely. However, the followers of Judah Maccabee, who were eventually, against all odds, to triumph against the Seleucid Empire and establish an independent Jewish state, emphatically did not reject all aspects of Hellenism. They accepted many features of Hellenistic culture and politics—including it seems, a form of democratic decision-making. (The First Book of Maccabees, which records the events of the revolt but was ultimately not canonized in the Hebrew Bible, mentions that the commemorative holiday of Hanukkah was established following a vote.) To this extent, the Maccabean movement represents the balanced approach which, in the many centuries since, has most often allowed Judaism to thrive, creatively drawing on non-Jewish culture while maintaining a rootedness in Jewish tradition. Some of the religious developments associated with this period in Jewish history also testify to this spirit of moderation. For example, First Maccabees provides the first example of the idea, eventually dominant in Rabbinic Judaism, that the command to rest on the Sabbath can be superseded by the need to preserve life; when the rebels were attacked on the Sabbath, they chose to resist, rather than condemning themselves to death. In these social and political innovations, we can understand the Maccabean movement as representing a revolutionary moderation.

The darker side of the story of the Maccabean movement began during the revolt itself. Despite what I have characterized as their ideological moderation, anti-Seleucid partisans were not kind to their radical assimilationist opponents—they are reported, for example, to have forcibly circumcised those Jewish men who had refused to undergo the rite. But more instructive is the fate of the post-revolutionary regime. Once their rule was secure, the Maccabees established themselves as the new dynasty of a restored Jewish kingdom, and proceeded, as is so often the case in post-revolutionary regimes, to replicate many of the faults of the government which they rose up to replace. In a manner contrary to most Jewish teaching (as least as understood by Rabbinic tradition) the Maccabees fused the offices of King and High Priest, thereby corrupting the latter office. While the original Maccabean revolt can be seen as a resistance movement against imperial domination, the Maccabean monarchy quickly became an expansionist power itself, conquering surrounding lands and subjecting them to Jewish rule. Most strikingly, this expansionist policy included at least one episode in which a non-Jewish population, the Edomites, were forcibly converted to Judaism—a tragic echo of Antiochus’ policy of religious coercion. This last event is the only known case of such forced conversion in Jewish history. Eventually, the Maccabean dynasty became little more than a group of power-hungry factions, eventually succumbing to civil war once again, at which point the Roman Empire moved in, spelling the end of Jewish sovereignty for more than two thousand years.

The legacy of Hanukkah, then, is much more complicated than either of its stereotyped portrayals (“Jewish Christmas” or “Proto-Zionist Struggle Against Assimilation”) would suggest. Certain aspects of the Maccabean revolt—a resistance to imperial domination, a moderate approach to cultural assimilation, a willingness to both preserve and adapt religious tradition—are of enduring value and have served Jewish communities well down the centuries. The history of the state which the Maccabees established, however, is a depressing example of the way in which revolutionary groups so often end up replicating the patterns of abuse against which their rebellion was originally directed. The imperialist and religiously chauvinistic policies of the Maccabean monarchy are themselves a particularly pernicious form of assimilation: an acceptance of an immoral politics which Jews are called on to reject. In the modern era, when the Jewish people has once again returned to political sovereignty and a Jewish state rules over a large non-Jewish population, it is particularly crucial to learn from these failures of the Maccabees.

Vincent Calabrese is a doctoral student in Jewish thought at the University of Toronto.