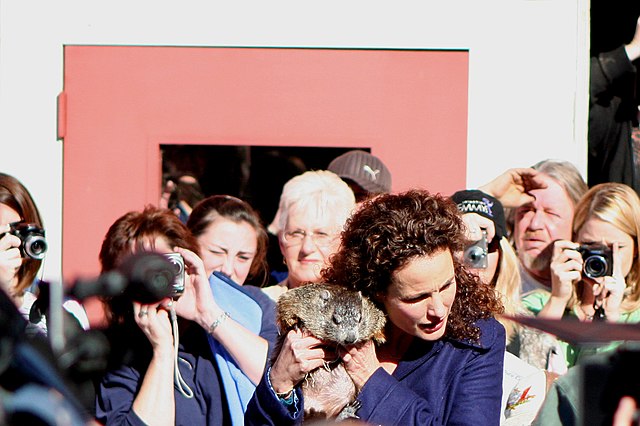 This week offers us the chance to meditate on one of the great spiritual and ideological Rorschach tests of the twentieth century. I’m thinking, of course, of Groundhog Day– not just the day itself, but the film that pays tribute to it and attempts to diagnose our existential and material condition. This surprisingly enduring film about a weather newscaster aptly named Phil who comes to Punxsutawney, Pennsylvania, to cover the groundhog of the same name and ends up reliving the day repeatedly, perhaps for eternity, is a favorite object of Buddhist, Jewish, Christian, and Falun Gong analysis and even received an underwhelming economic reading from the Ron Paul funded libertarian think tank, the Mises Institute. Each tradition is able to spot its own understanding of freedom, good works, greed, happiness, liberation, and eternity in this nineties comedy.

Groundhog Day still has much to offer in pandemic years of deep social isolation and endlessly stalled political progress. We find ourselves to be both stuck in our daily routine and atomized condition as individuals and to be lost in a frantic, predatory capitalist landscape with few clear paths forward to confront the existential crises facing our world. This condition is embodied most clearly by the unhoused old man who dies each night of the film. At first, we might not even notice him begging on the street – a sad sight in a town celebrating its most famous holiday while life insurance salesmen accost strangers on the same corner – but we do once he becomes the object of Phil’s neurotic attempts to do good deeds. We can see in him the countless deaths that have traumatized our world over the past years and the silent suffering that underlies capitalism more broadly. It is the nurse who captures the depth of our despair when she says, “Sometimes people just die.” True enough for a bit of spiritual consolation, but in recent years we have come to know in a particularly visceral manner the direct relationship between public policy and human misery. The nurse's admission, although understandable, is tragic. What other possibilities do we have aside from the kind of resignation embodied by the nurse? Can a particularly religious socialist perspective help us to understand the film and our moment more deeply? Groundhog Day intuits the necessity of a radical economic change in our social life, but struggles to imagine a clear and organized structure to accomplish this outside of individual good intentions.

Standard readings of Christian theology into Groundhog Day consider Phil’s inadequate vision of human happiness and how his addiction to immediate gratification results in malaise, boredom, and cynicism. He imagines that a major network is “interested” in him, that his next sexual conquest will be truly satisfying, that not flossing is a special kind of freedom. With divine confidence he tells a police officer, “I make the weather.” The solution to Phil’s plight, however, is often misread. Most theories about why Phil escapes the eternal misery of reliving the same day revolve around the way in which he becomes an increasingly better version of himself and the cheerful hope that this slow and steady growth has something to do with small acts of kindness, such as helping someone change their tire. Although Phil does need to grow in these ways, if the moral vision of the film simply ends here, it is only shallow neoliberal spirituality.

The solution the film actually looks for, although doesn’t fully express, is what we really need in our current moment: a radical act of economic interruption. Despite his best intentions, Phil is not able to break out of the cycle by himself. He needs help, which comes in the form of his producer, Rita, who intervenes at a fundraising “bachelor auction” at which Phil is on display. She boldly disrupts business as usual in Punxsutawney when she empties her purse to ransom him. Of course, the scene is played for laughs, but we can see here many elements of our crumbling social life – the commodification of the human body, bad faith uses of identity politics and feminism (as if women also being able to bid on a human means we’ve made progress), and a woefully meager approach to social spending and mutual aid (this is, after all, a fundraiser). Rita seems to understand the situation and works within it to undermine it. To understand this feat and how it points to our own salvation in the face of climate change, global inequality, nuclear war, et al., we must first understand Rita.

Rita is Phil’s producer, which already invites some political and metaphysical reflections. Is she a capitalist? The means of production itself? Or is she the ground of the possibility of Phil’s existence as a weather forecaster? Does she make him real? At the very least, Rita, who proudly states that she attended Catholic school for twelve years (and thus symbolically completed her Christian education), grasps the “nowness” of the Biblical depiction of the Kingdom of Heaven. It is not “out there” somewhere but breaking into our experience in the present. Whereas Phil finds himself in a sort of Hell, unable to experience happiness or satisfaction, Rita already senses the Divine around her, as when she tells a waitress that the sticky buns are “just heaven.”

Rita understands that the only resolution to Phil’s predicament is to interrupt the auction – a humorous flipping of the tables in the Temple – and pay all that she has to free him. The winning bid on another candidate is 25 cents and other offers on the table for Phil are paltry: the equivalent of haggling over an extra $600 to give people a meager one-time check instead of discussing bolder kinds of structural economic change when we needed it most. Instead, Rita gives all that she has: $339.88. The gasps and cheers from the crowd reveal this act not to be a participation in the normal economic order that Phil experiences every day, but a new kind of relationship between people in the world of Punxsutawney. If this move is partially an act of economic restructuring, it also evokes ransom soteriology. In addition to his own radical economic vision, the death of Jesus of Nazareth is often understood as a sort of payment that rights a coercive and oppressive situation.

It is this economic focus of the movie that draws me to it recently. Phil’s spiritual growth makes for plenty of discussion and insight (and a lot of laughs), but it is not his good deeds or his ability to learn French or ice sculpting that save him. A large payment is necessary (debt forgiveness, universal basic income, reparations, universal health care – you know the list) to move us forward in history and to overcome our alienated condition. The movie is also a sort of 1990s “end-of-history” film (what’s life like when a snowstorm is the most difficult part of your existence?) and imagines that the political change needed could be the result of a free choice of love – finding the right kind of person in a position of authority willing to disrupt the system. Read optimistically, the call is that whenever we find ourselves in positions of power, the righteous move is the kind of self-emptying embodied by Rita. Maybe that seemed possible at an earlier time, but from the perspective of this Phil Connors, there are no Ritas among the Zuckerbergs, Waltons, Sandbergs, and Resnicks of the world.

Read another way, Rita is an embodiment of the Holy Spirit – or, according to Slavoj Zizek, the gathered divine community. She often sits next to a sign in the diner that says, “Happy Groundhog Day: The Spirit.” Certainly, The Spirit is the local newspaper, but I do find solace in the movie sensing the possibility of an organized spiritual community affecting economic change. Without that reading, however, the crucial question remains: how to break up the auction and reject the commodification of human beings with an act of economic restitution? In addition to its spiritual insights, the film depicts the necessity of such a radical material shift, but falls back on romantic comedy conventions and individualism to imagine the motivation. I feel particularly “bereft of hope” in this “bleak and dark winter,” that such acts are possible, but the words of the song that awaken Phil every morning still echo: “I got you. . .” And, maybe, together, “There ain't no hill or mountain we can't climb.”

Michael Pappa has been a high school teacher, a Jesuit novice, a youth minister and a writer for the Bread Loaf School of English Crumb. He currently lives in Norwalk, Connecticut where he enjoys playing music and rugby, worships as a Catholic and a Quaker, and is a member of CT DSA.