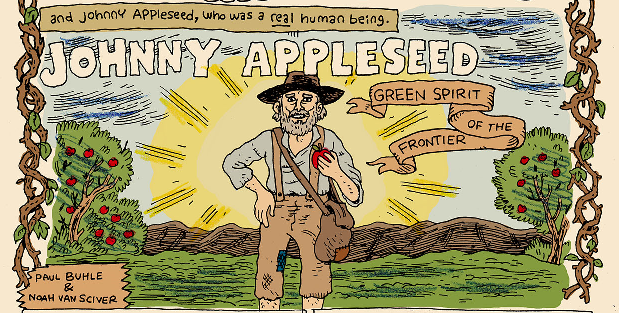 Folk tales don’t command much respect in the United States. In a country so addicted to the future that events half a century old seem to belong to a dim past, the folk tales that recall events from the early days of the country’s history are seen as fit only as children’s stories. But just like good children’s stories, good folk tales are not simple, and they are not tame.

Take Johnny Appleseed, the wandering nurseryman who planted apple trees along the frontier.

A harmless and happy story for the kids, surely. But the real Johnny Appleseed – born John Chapman in 1774 – was an itinerant Swedenborgian missionary who counseled the settlers he met to live in harmony with the land, with each other, and with the native tribes they encountered.

Emmanuel Swedenborg was a Christian reformer who reduced the Gospel to its essential core: the love of God and neighbor. Like most reformers, he and his followers ran afoul of the established churches. Some Swedenborgians, like the mystic William Blake, whose poem “Jerusalem” became the anthem of the British Labour Party, spent their lives preaching this message in defiance of state repression. Johnny Appleseed took the message to edge of the American frontier in the hopes that it could be nurtured in freedom.

His radical message had a practically political element as well: by planting fruit trees on land newly claimed by settlers, he helped struggling families secure their land grants by fulfilling a legal obligation to plant fifty fruit trees in the first year of settlement. Meeting this obligation allowed otherwise poor and hardworking families to avoid the predatory claims of land speculators looking for a quick profit.

In the spirit of restoring the radical promise embedded in these folk tales, historian Paul Buhle and artist Noah Van Sciver have collaborated in creating a full-length comic art book on the life of Johnny Appleseed to be published in 2016. Readers of Religious Socialism can read a ten page preview strip here: http://www.religioussocialism.org/johnny_appleseed_comic_preview