Justice and Inclusion: From Isaiah’s Pen to our Eyes and Ears 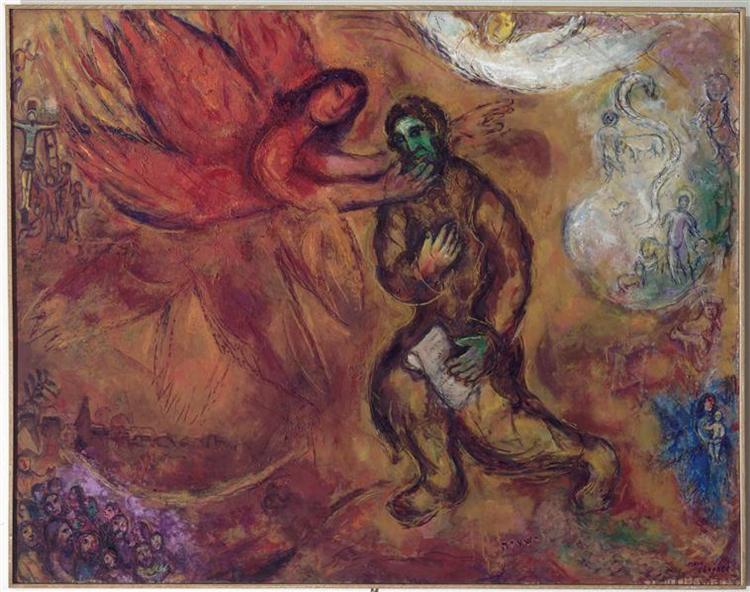 Back in 2014, I embarked on a read of the complete Hebrew Bible, with a close focus on the text. It took me two-and-a-half years to finish, and reading it was hugely important to the way I have come to think about scripture. Last year, I decided to repeat that read, because Robert Alter, whose translations of various books were central to my first journey through the text, had finally finished his edition of the entire Hebrew Bible, and wanted his poetic sensibility and commentary to guide me through what I’d missed before. Of those missing parts, none were more important than Isaiah (the image here is Marc Chagall’s surrealist interpretation of Isaiah 6:6, when one of God’s seraphim descends from heaven and touches the prophet’s lips with a burning coal taken from God’s altar, thereby cleansing his lips and calling him to reveal God’s will).

The Book of Isaiah has, of course, been heavily proof-texted and read selectively by Christians for centuries. No other set of Hebrew poetic and prophetic texts that made their way into the canonical Old Testament have had as massive an impact on how Christians, from ancient to modern times, articulated the faith which the recorded statements of Jesus and the accounts and letters of his early followers inspired. It’s not just that Jesus himself is shown in the Christian Gospels to be quoting from or referencing Isaiah more than any other older text besides the Psalms; it’s that Christianity’s entire cultural and theological approach to and interpretation of Jesus’ message and meaning comes through a heavily Isaian lens–the language of Handel’s Messiah being just the most obvious example. (And with the commemoration of the Messiah’s birth just a couple of days away, this seems like a good time to revisit the text.)

Separating myself as a reader from that inheritance was no easy feat, and I can’t say I was entirely successful. Thanks to Alter’s translation, however, a couple of key ideas were made profoundly clear to me. First, that from its beginning, the book of Isaiah–far more than those associated with any of the other Hebrew prophets–is a text that presents calls to social justice on the same level as its condemnations of the cultic failures and ritual sins of Israel. Isaiah 1:14-17 sets the theme for the entire text, with its explicit condemnation of those who hypocritically attend outwardly to religious duties but ignore the needs of those who are part of that same religious community. As Alter renders it:

Your new moons and your appointed times I utterly despise. / They have become a burden to me, I cannot bear them. / And when you spread your palms, I avert My eyes from you. / Though you abundantly pray, I do not listen. Your hands are full of blood. / Wash, become pure. Remove your evil acts from My eyes. Cease doing evil. / Learn to do good, seek justice. / Make the oppressed happy, defend the orphan, argue the widow’s case.

The text of Isaiah regularly connects the evil that must end if the orphan is to be defended with the accumulation of wealth itself, entirely aside from whatever charitable purposes to which such wealth might be set. Growth itself, in a society where land had been–at least insofar as the legends of the Israeli conquest of Palestine suggested to those living in the 7th century BCE, the like era of the author(s) of Isaiah–distributed to every family as an inheritance, risks great evil:

Woe, who add house to house, who put field together with field till there is no space left, and you alone are settled, in the heart of the land. / In the hearing of the Lord of Armies: I swear, many houses shall turn to ruin, great and good ones with none living in them (Isaiah 5:8-9).

Of course, in today’s globalized and financialized economy, far more shaped as it is by speculative, debt-financed, corporate-dominated exchanges of information and images than by productive, non-alienated, land-based labor, such warnings about growth might be easy to dismiss as limited to the agrarian world of ancient Israel. Still, perhaps the pastoral and anti-urban context from which such beautiful visions and invocations of God’s justice were articulated ought to be recognized as potentially inseparable from the repentance that these prophet-authors called for as well, which in turn might suggest hard questions for leftists like myself to struggle with as we contemplate our responses to capitalist accumulation and industrial growth. Consider Isaiah 32: 13-20:

On My people’s soil thorn and thistle shall spring up / for on all the houses of revelry, the merrymaking town, / the villa is abandoned, the town’s hubbub left behind. / The citadel and the tower become bare places for all time, / wild asses’ revelry, pasture for the flocks. / Till a spirit is poured on us from above, and the desert turns to farmland and farmland is reckoned as forest / And justice abides in the desert, and righteousness dwells in the farmland. / And the doing of righteousness shall be peace, and the work of righteousness, safe and quiet forever. / And My people shall swell in abodes of peace, in safe dwellings and tranquil places of rest. / And it shall come down as the forest comes down, and in the lowland the town shall come low. / Happy, you who sow near all waters, who let loose the ox and the donkey.

Pastoral visions like this naturally generate all the usual individualistic reactions–start associating God’s promises with some kind of communitarian ideal, and the next thing you know everyone’s on the hunt to drive out the dissidents, the foreigners, and anyone else who is seen as not fitting in with the community. To be sure, there’s no way to discern honestly in the Isaian voice any kind of validation of liberal concerns; it just isn’t there. Isaiah is concerned with God’s covenant with the descendants of Israel; that is undeniable. And yet, perhaps surprisingly, another concern is there–a concern I’d never noticed until I read Alter’s translation. It is the degree to which the prophecies in the book of Isaiah reflect the Mosaic insistence upon respect for, and even the inclusion of, the stranger–including strangers whose lives (including, at least on the basis of one reading, their sexual lives) might seem to exist in opposition to the mandates of Israel’s faith:

And let not the foreigner say, who joins the Lord, saying / ‘The Lord has kept me apart from his people,’ nor let the eunuch say, ‘Why, I am a withered tree.’ / For thus said the Lord: Of the eunuchs who keep My sabbath, / and choose what I desire and hold fast to My covenant, / I will give them in My house and within My walls a marker and a name better than sons and daughters, an everlasting name will I give them that shall not be cut off…./ For My house a house of prayer shall be called for all the peoples (Isaiah 56:3-5, 7).

Note those final three words. At a time of year when most of us are surrounded with presentations of these prophetic calls in entirely predictive, Christological contexts, it is good to remember that this kind of almost-if-not-quite-entirely universalist sentiment can be found frequently throughout text of Isaiah--especially in the later, so-called Second Isaiah sections--entirely apart from the Christian gloss generally (however sincerely, or even, perhaps, arguably legitimately) placed upon it. That leftists can learn from the Hebrew prophets is hardly a new insight, but this year, thanks to Alter’s help, I appreciated the reminder.

Russell Arben Fox is a professor of political science at Friends University, a small Christian liberal arts college in Wichita, KS. He is a member of the Wichita chapter of Democratic Socialists of America.