Lessons from the Poor People's Campaign 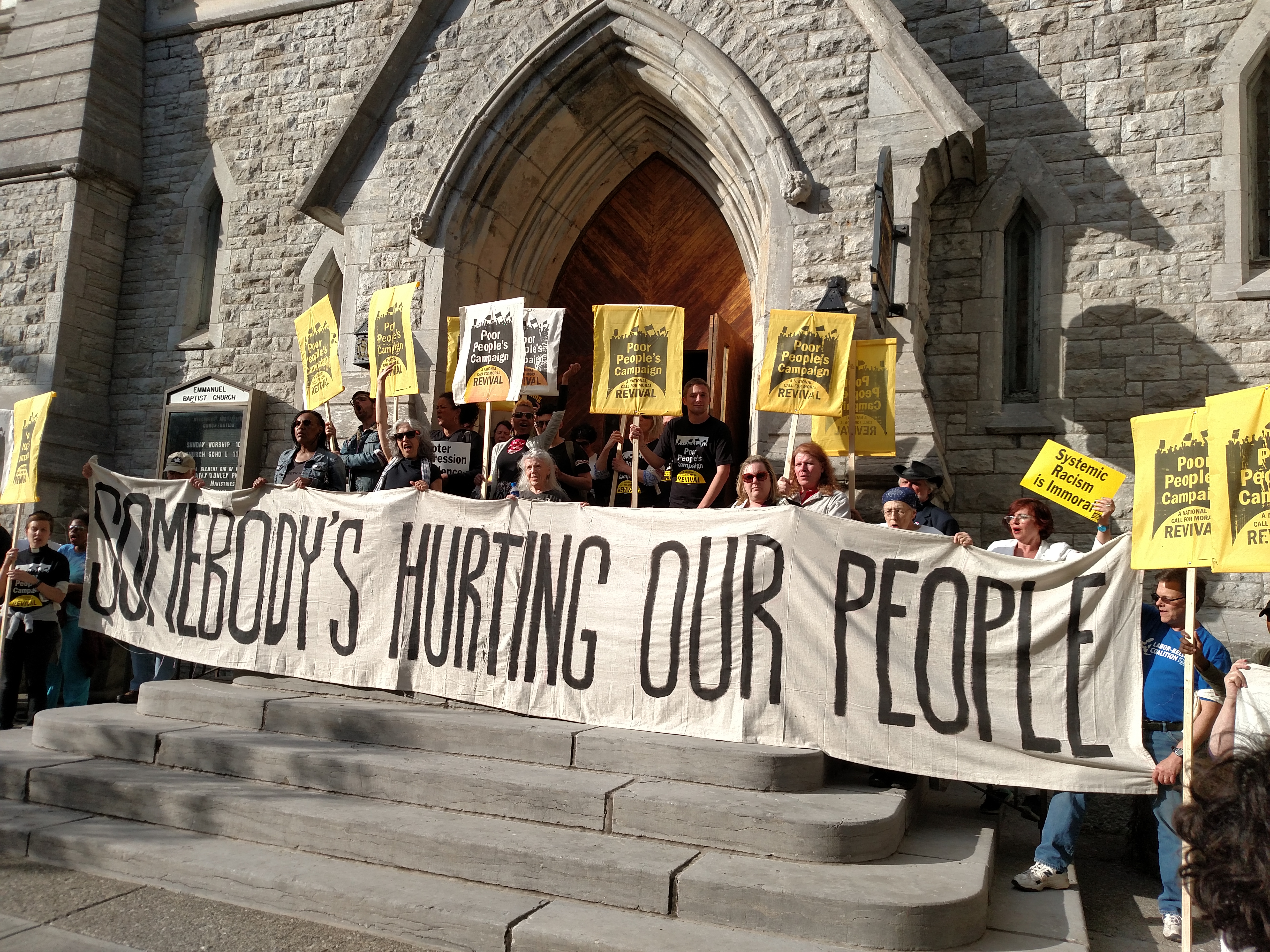 For six weeks, a renewed Poor People’s Campaign has launched the widest wave of civil disobedience in the history of the United States. The campaign is not so much a commemoration of the 1968 campaign as a continuation. Thousands have participated, including numerous members of the clergy, and thousands have been arrested in actions of nonviolent civil disobedience. (I was one of them). The campaign has been successful in many ways. It has revived a radical progressive-leaning Christianity dormant since at least 1968. The campaign has given space to poor and disadvantaged people and given them a space to organize. Here are some lessons that can be applicable to DSA.

Nationwide protest is possible if coordinated properly. The campaign’s success was in its ability to have events and actions across 40 states and DC. This is in contrast to the original campaign, which focused solely on action in Washington DC.

The reason for this strategic change was twofold. First, there was an awareness that the issues the campaign was trying to address were not a responsibility of local government alone, but also of state government. Reverend Barber is a veteran of state-focused campaigns on voter suppression in North Carolina. The state governments had to be held responsible for inaction or bad policy. It also allowed relationships to be built with groups and individuals who are more intimately familiar with their own plight. Both Reverend William Barber and Reverend Liz Theoharis traveled to states like Kentucky, North Carolina, and Michigan, in solidarity with people there.

The second is geographical reach. Geography matters more than numbers politically in the United States. Thousands of people in Washington DC alone is one thing; thousands of the people participating in the same protest action across the United States is a different thing altogether. By applying pressure to all points, success could made achievable across the country. This made the campaign more noticed in both local and national media. DSA is an organization that has a similar reach. With good national leadership that respects local chapters and issues but brings them into a national consciousness, and with proper coordination across chapters, the campaign’s protest action can be replicated by us, in a coordinated national day of action. I talked to organizers from other states who told me that while the themes were decided by national leadership the format and target of direct action was left to the local chapters. This preserved freedom and creativity, and also flexibility. This fits well with how DSA is structured, with local chapters having the same freedom of action. Hopefully this strategy will continue to prove successful and be expanded.

The importance of fusion politics. A key concept in the campaign was the idea of fusion politics. This is to say that the issues affected groups across demographic lines, or that the issues which affected different identities could be addressed together. A huge debate has come up with racial issues versus economic issues, and the idea of identity politics. The Poor People’s Campaign did not value one over the other but merged all the issues together as a moral issue. The organizers spoke and showed how the issues were interlocking. Racial voter suppression led to economic policies that ended up hurting poor whites, for example. The purpose of the campaign was to bring together people of different religions, races, sexual orientations, genders, and classes (though its focus here was on the poor, working poor, and working class). Barber has even gone so far as to want to bring together both liberals and conservatives. While some on the left have scoffed at the idea of dialogue with professed conservatives, one cannot preach only to those who already are on one's own side. If there is to be a mass movement it must have those who are willing to listen, to be heard, and to be converted. DSA must make an effort to speak to those who initially may oppose us from the working class, in order to provide a space to win them over to the side of righteousness.

The use of moral and theological language in rally rhetoric. It is not surprising that a campaign facilitated by clergy would have a sermonic tone at its rallies. The use of this rhetoric was to bring spiritual power on the side of the protestors and against the powers that be. The idea of morality was a way to swing the campaign’s view as the only legitimate view. Again, this goes with Barber’s decision to not have an explicitly right or left movement. In our culture saying you are on the political left supposes that a political right exists, and one has a choice to be one or the other, like choosing any other product or service in our capitalist system. The phrasing by the campaign was clear—there is only one path of life and one path of death. I felt the power of the rhetoric firsthand and its effect on the crowd. I also realized the ironic timing of using prophetic rhetoric against the government as a counterweight to those who also use theological rhetoric to support the regime. Theological language in the context of class struggle is not new. Eugene Debs and Rosa Luxemburg both used it against the opposition. Putting God on the side of the revolution already judges the immorality of those in power. “It is not about right and left,” Barber said once, “it is about right and wrong.” DSA comrades must make an effort to emphasize our issues as moral issues. These aren’t about different political economic options, but moral choices. Our goal is to achieve socialism as the center of human life for all. We must be confident and willing to morally indict the opposition and those in power. Perhaps we must also leave room for theological rhetoric to also indict capitalist immorality.

Movement energy can help parallel movements. Jeff Sessions picked the wrong week to quote the Bible. The backlash against the US Attorney General from theologians and clergy on media and social media was immediate and decisive. The period of the Poor People’s Campaign has seen renewed energy by clergy and theologians to address similar issues in their own way. The Most Reverend Michael Curry (presiding Bishop of the Episcopal Church, and of royal wedding fame) and Jim Wallis of Sojourners launched a movement, parallel with the Poor People’s Campaign, to galvanize clergy, theologians, and seminarians to “reclaim” Jesus and to see Christianity as an inherently counter-cultural movement. The service at National City Christian Church was followed by a candlelight vigil and protest outside the White House. The response to the US government policy of separating immigrant and refugee children from their parents has been another cause in which clergy have been center stage during the campaign. The lesson is that this movement can energize other movements into action. The hope that the Poor People’s Campaign would inaugurate a “season of resistance” was born out. A movement like this can give people confidence in making their own voices heard and actions organized. DSA can help move others or helped be moved by others. We have seen this with the Metro DC DSA chapter’s own actions, particularly in migrant justice actions, during the same period. DSA chapters have engaged in similar actions as well. The summer of 2018 seems like it will be heavy with various groups doing direct action. This sets the atmosphere and narrative and keeps up the pressure on the powers that be.

Clergy can be the vanguard of the next revolution. I cannot overstate the bravery, strategy, compassion, and prophetic witness of the clergy members who participated in the campaign. Their moral leadership and ministry proved invaluable in making the campaign a success. This brings up an interesting reality: clergy can be natural “professional revolutionaries.” They have the freedom of action to plan and participate in the campaign. Rest assured being a member of the clergy is a full-time job, beyond the weekly worship service. (As an intern for a local church I saw what church work involved). Much emotional labor is required for the job. And yet this emotional labor is what they bring in terms of ministering to the poor and disadvantaged. The ability to be present and listen and allow others to speak is a skill that allowed the moral witnesses comfort and confidence to bring their stories to the national stage. Ministry can also be coupled by prophetic indignation. Caring for the poor and disadvantaged also gives room for anger at an unjust system which makes the impoverished poor. Righteous indignation sowed the seeds for this campaign in the first place. These qualities of ministering to the poor and oppressed and being prophetic witnesses must be cultivated by DSA members. We must be ministers as much as activists. We must be present and listen to their stories, their issues, their needs. We also must find ways of providing for those needs, and also give space and confidence so the stories of the disadvantaged may be known to those in power and to the country at large. Perhaps DSA should also seek to recruit more clergy into our ranks, to learn and be taught new ways of activism, and ministering to those people capitalism leaves behind. It is for and with those people that we fight, and we must be willing to learn new ways of fighting against capitalism.

Those five broad lessons from participating in the 40 days of action resonated with me. I do believe that the campaign is a watershed moment for Christian activism. The campaign also shows the potential of a mass movement that is passionate and dedicated, built from among the people rejected by capitalism. DSA should learn from and be energized by what the Poor People’s Campaign has achieved.

Eric Sommers is a NoVaMDC DSA member and a leader in that local's Religious Socialism Caucus. This article is reprinted with permission from the Washington Socialist of June 29, 2018.