Let them Eat! A Reflection on Bastille Day 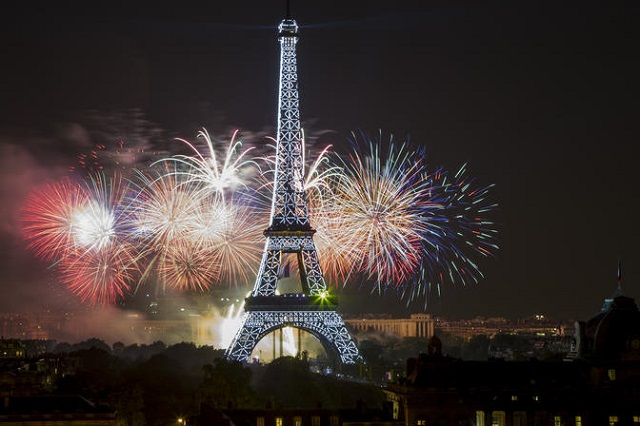 Will there be a revolution because of climate change?

As we approach July 14th, Bastille Day, we might well ask the question.

For centuries, Europe accepted kings and queens. The monarchs declared that they ruled by the grace of God and, for many people, the monarchs must have seemed like a force of nature.  It was difficult to imagine anything else.

Before the Revolution, the sun rose and set, and the Sun King,  Louis  XIV,   “the God-given,” ruled in France for so long that few thought change was possible.  Meanwhile, droughts and heat waves,  floods,  and  great storms caused major problems. Crops failed, but  only scholars   wondered about the weather. Although the hunger  that resulted, well, that was a different matter. Did the monarchs care about such things? Louis XVI couldn’t respond.

In 1783, a volcanic eruption in Iceland blasted tons of volcanic ash into the sky above Europe, causing atmospheric and climate changes for much of  Europe. Most governments survived, but the social and political situation in France was already precarious. By 1789,  food production had been dramatically affected by years of shifting  weather patterns. Agriculture dominated the French economy, accounting for about 75% of all domestic production. Most workers tilled the soil, although most laborers were landless.   In 1789, real wages  collapsed as the price  of bread rose by 80-90% in  many  areas.    By the spring, there were bread riots (supposedly prompting the queen’s infamous line that starving peasants should eat brioches, a rich egg bread), followed by the major uprising that's identified with Bastille Day, when angry citizens stormed the political prison.

I've been told that the correct name for the holiday is la Fête nationale.    The term "Bastille Day" belongs to the English-speaking nations.   Still,  for socialists in many nations,  July 14th will always be important. After  1789, Thomas Paine immersed himself in the French Revolution.   He moved to Paris and, despite not being able to speak French, was elected to the National Convention. And so it was that  the spirit of  the Fourth of July   and American iconoclasm connected  to another event of global significance.

The age of monarchs has vanished. Something else is changing. Because of climate change and other environmental problems,  scientists suggest  that humanity has entered the Anthropocene epoch.  Perhaps it began during  the Industrial Revolution.  Human-induced emissions of greenhouse gases are resulting in large-scale shifts in weather patterns.

For Citizen  Paine, what was important in every nation  was the concept of “natural rights.”   The influence of the U.S.  Declaration of Independence is apparent in  his writings during the 1790s.  Human rights,  said the radicals,   have their basis in Nature because of  human experiences in the natural world.   Government exists to secure human rights and to affirm human dignity.

Pause for a bit of reflection during the month of July.  Each summer is hotter than the previous one, and the sea level continues to rise.   The world is experiencing  droughts, major wildfires, and the spread of tropical diseases. Millions of climate change refugees are on the move.   The 2016 Paris Agreement  promises international cooperation in   creating a clean energy economy,  and it may happen. For religious socialists, the challenge is to reduce suffering while bringing all of humanity into a better way of living.    Raise your glass of  Champagne or mineral water on Bastille Day, and toast  the once and future revolution. Thomas Paine's  radicalism and the best of  Bastille Day provide some inspiration.

Robert Francis Murphy is a member of the Pinellas DSA (Florida) and is active in the DSA's Religion and Socialism Working Group. He is a Unitarian Universalist minister emeritus who is involved in programs for economic and environmental justice.