Loving the Sinner and not the Sin: The Case of Donald Trump 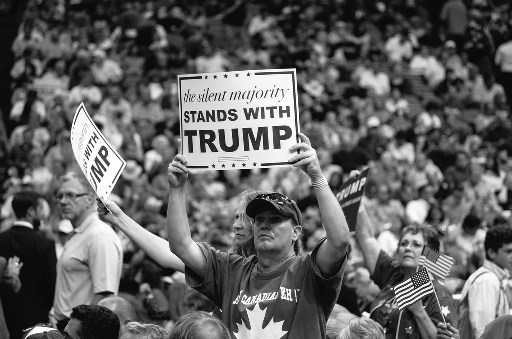 "Loving the Sinner and Not the Sin: The Case of Donald Trump"

Can we cross barriers of ideology and perception to reach supporters of Donald Trump?

I stopped making jokes about Donald Trump’s hair a month ago, because I am a Christian. Being a Christian is a great source of joy for me, but it often puts the damper on short-term fun. I have no doubt that Jesus would condemn nearly everything that Donald Trump says and does, but he would not attack Trump personally. Hate the sin; love the sinner. You know the drill. It’s not exclusive to Christianity.

This resolve to stop making fun of Trump’s appearance made me think about how we on the left characterize his supporters: not very informed, not very bright, or simply racist. Insulting people is not going to get them to engage in dialogue with us and it’s certainly not going to get them to move left. More important, it’s wrong. We know that many of Trump’s supporters are voting against their own interests. But rather than engage them on this front, we’re likely to chortle about their poor grasp of history, their taste in music, and their inability to define the term “intersectionality.”

My brothers and sisters, we can be clueless–and elitist on top of it.

I have a lot of experience with the right wing. I was raised by it. My father was the original angry white male: a high school dropout with an absentee father, he bounced around from relative to relative until he got drafted. He was a die-hard Republican who cried when Nixon resigned. I was in elementary school when I started arguing with him about his callous and bigoted condemnation of “welfare queens.”

What I didn’t get–not until years after he’d died without a penny in the bank–was that he was also a casualty of heartless capitalism. He knew that he’d never be able to take vacations, buy a new car, or do any of the things that advertising told him were the keys to happiness, a commodity Dad never did get his hands on. He needed to blame somebody for that. Rather than direct the blame up, where it belongs, he placed it down, on the few people lower on the socioeconomic ladder than he was. I suppose you could put him in Hillary Clinton’s “basket of deplorables.”  I tend to think of him as a victim of the world’s largest con game.

Perhaps the least savory thing that Dad was is a racist. We need to call out racism, of course, absolutely and relentlessly. But once again, love the sinner; hate the sin should be our mantra. Labeling people as racist or non-racist is nonsense. Work on implicit bias has shown quite powerfully that none of us are without sin here. When we condemn Donald Trump and his ilk on Facebook for their latest piece of hate speech, does that somehow absolve us? Yes, call out racism. But never stop examining your own thoughts and actions. Remove the plank in your own eye first. The feeling of superiority will quickly vanish.

Loving Trump, as I am called to do, is difficult. I usually fail. Mass deportations are simply evil, and it is challenging to separate the proponent from the ugly plan. Like many people, I had an especially challenging time not hating Trump after the revelation that he bragged about how his star power allows him to sexually assault women.

When I was waitressing, a customer grabbed me from behind, squeezed my breasts and thrust his hips into my backside. I was terrified and humiliated.  The restaurant was empty, and I fully expected to be raped. Thank God, he laughed and walked out the door. But here is the truly horrible part of that story. The next time he came in, I waited on him as if nothing had happened. It was a busy Saturday night, and, in addition to my embarrassment, I was afraid of causing a commotion in my section and losing tables. High rates of sexual harassment are documented among women who rely on tips for a living. They smile through things that no one should have to encounter, because making a fuss means losing money.

It was more than 30 years before I told another human being about it. As I write, I have difficulty breathing.

So not hating Trump for forcing himself on women means not hating that man who violated 20-year-old me. In other words, it means forgiving my enemy, as Jesus commanded. Again, forgiveness does not mean a lack of accountability. Men who assault women should be prosecuted. If it’s still legally possible, Trump should be prosecuted. But he should be, must be, regarded as a fellow human being.

I don’t believe that Jesus preached forgiveness entirely for abstract reasons. He also did it because it is the only way for the injured party to move forward.  When we demonize the Other, healing is impossible.

My brothers and sisters who support Trump are not lesser than I. But I truly believe they are wrong. I also believe that there is a real potential for the left to win adherents if we speak to people like equals:

What kind of future do you want for your children?

Do you feel justly compensated for your work?

Do you believe that you’ll be able to retire?

If we ask real questions, listen with empathy and outline what socialism has to offer in the many areas where Americans feel profound anxiety, we have a chance. We won’t win them over by being clever. We can win them over by treating them with what a Christian would call agape and a socialist would call solidarity.

I find that they are very much the same thing.