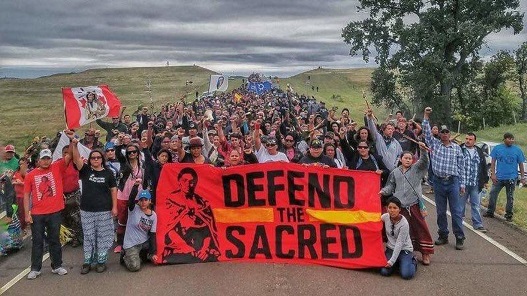 I have never been a fan of Thanksgiving. Yes, gratitude is a wonderful thing, and there’s never a bad time to give thanks. Plus, what’s not to like about gathering with family and friends for a day of feasting and relaxing? Still, though, I find it hard to look past everything that the holiday ignores about the history of genocide and oppression of the Indigenous peoples of the United States.

This Thanksgiving in particular, I have misgivings. The Standing Rock Sioux’s valiant fight against the Dakota Access Pipeline – a $3.7 billion project to deliver crude oil from the Bakken field in western North Dakota southward to Illinois – continues in the face of outsized police brutality. On the night of November 20, a militarized police force used rubber bullets, concussion grenades, tear gas, water guns (in sub-freezing temperatures), and more on a crowd of water protectors – peaceful protesters – at Standing Rock. More than 165 people were injured, some of them very seriously.

Earlier this month, I joined more than 500 clergy from at least 20 different faith traditions who responded to a clergy call to visit Standing Rock to bear witness to the obstacles faced by the Standing Rock Sioux. The clergy call was issued by Rev. John Floberg, an Episcopal priest who has served in Standing Rock for more than 25 years. The brutality of November 20 took place on a blocked-off bridge on Highway 1806. The interfaith witness of November 3 took place near the far end of this same bridge, and the disturbing memory of the site is etched on my brain. Two burned-out, abandoned trucks have been blocking access to the bridge since October. Authorities claim that the bridge is structurally unsound, but there has been no evidence of an attempt to move the trucks or to work on repairing the bridge. Instead, it appears that the authorities are intentionally leaving the blockade in place, hindering the water protectors’ access to medical aid as well as supplies. Reportedly, it was an attempt by the water protectors to dislodge the blockade that led to the confrontation on November 20. Between burned-out vehicles left on the bridge (and others in the vicinity of the bridge, at least at the time of my visit) and the constant sight and sound of a helicopter flying overhead, there is a war-zone-like feeling to the area. A colleague of mine who was also at the clergy action earlier this month noted, “The burned out vehicles, the militarized police, the closed roads and bridges are all reminiscent of time I spent in Belfast in 1989." (From the November 6, 2016 sermon of the Rev. Peggy Clarke preached at the First Unitarian Society of Westchester.) Once again, federal authorities are treating the Sioux as a people who need to be subdued and conquered.

The pipeline that threatens to go through the Standing Rock Sioux’s heritage lands, endangering their water supply, was originally supposed to go through Bismarck, ND. Bismarck residents were not happy and had it rerouted because of the potential danger that it posed to that city’s water supply. This clear case of environmental racism poses danger to the Standing Rock Sioux.

On Thanksgiving, many of us will be sitting around the table, perhaps having awkward or even painful conversations with relatives in the aftermath of the November 8 election. But these conversations aside, do not forget the brave people in Standing Rock who continue to face serious physical dangers from militarized police – a brave group of people who are protecting their (and our) water, knowing that “water is life.” If you say a prayer before your meal, please remember them and their sacred struggle.

Better yet, please do what you can to support their sacred struggle. Here are some actions you can take now:

Rev. M. Lara Hoke is the minister of the Unitarian Universalist Congregation in Andover, Massachusetts. She believes, as Mahatma Gandhi said, “Those who say religion has nothing to do with politics do not know what religion is.” Lara discovered DSA when she was a student at Harvard Divinity School, taking a course with Cornel West. She is part of the Editorial Group of the Religious Socialism blog.