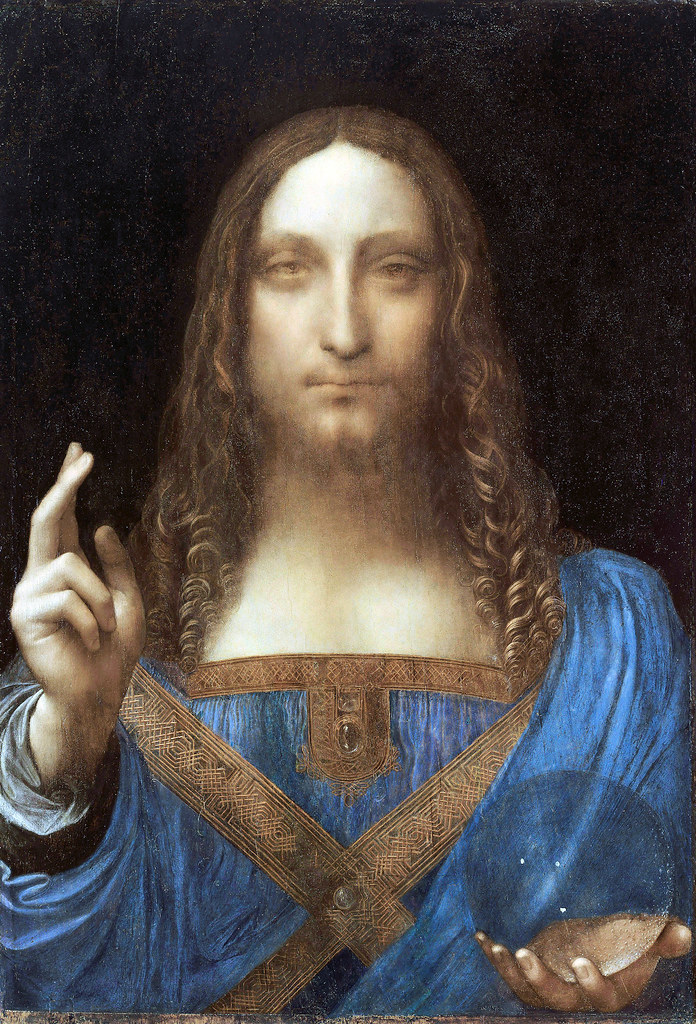 It’s a simple painting, quiet and inauspicious. The figure at its center stares out from a void of darkness, his pale skin shining, his brown hair falling in delicate curls upon his blue tunic. His face is calm yet inscrutable, as his right hand makes the sign of the cross. His left hand holds a transparent crystal orb within which, it is understood, the cosmos is contained. Those in the know label this painting a Salvator Mundi (Savior of the World), a frequent motif in Renaissance-era art, wherein Jesus Christ—inevitably whitened and enriched beyond his historical station as an itinerant Palestinian rabbi—is depicted as holding the Earth, and all of creation itself, in his hand. There are countless Salvator Mundi paintings, many by esteemed masters. But this one is different. This, it is said, is not just a Salvator Mundi by a master, but the Salvator Mundi by the master. For this is the painting believed to be painted by none other than Leonardo da Vinci.

That is, of course, if the painting is authentic. Assumed to have been lost a century after its creation, it was spotted by an eagle-eyed art dealer in a New Orleans auction house where it was assumed to be the work of one of da Vinci’s students. But during the restoration process it was declared to be from the hand of the master himself, sparking one of the most controversial sagas in modern art history as its price ballooned from a few thousand dollars in 2005 to nearly half a billion when it was sold at auction in 2017 to someone acting as a proxy for the Saudi crown prince, who supposedly wants to display this “male Mona Lisa” in a soon-to-be-built world-class museum.

This previously nondescript painting has become a cause célèbre among art collectors and a cause maudite among art critics and historians. It has changed hands from shady Swiss dealers to shadier Russian billionaires to murderous Saudi princes. This stunning history has been captured and condensed in Andreas Koefoed’s brilliant and disturbing documentary The Lost Leonardo, which opened in theaters earlier this month.

In my career as a critic, I have reviewed many documentaries about the art world and those who navigate it, but this is perhaps the only one that fully captures the corruption, and duplicity that animate that particular mundus. The film isn’t just about the painting itself; instead, Koefoed uses its story as a springboard to examine how criminals use the art world to launder money, dodge tax laws, and rob the public of cultural masterpieces. After all, an ex-Soviet oligarch may not be able to transfer illicit funds out of Russia without alerting international investigators. But if that same oligarch spent hundreds of millions of dollars on paintings by Picasso or Gauguin, moved them to another country, and then resold them at wildly inflated prices with the aid of complicit auction houses happy for an eight-figure commission fee, there’s little any police force could do.

Which is exactly what happened to this alleged da Vinci. Notice the word “alleged,” for to this day there is still doubt among experts as to whether or not the painting is authentic. Not that it matters, as Koefoed explains. The film details how esteemed art museums, galleries, and auction houses seemed happy to ignore credible naysayers so long as they could sell exhibition tickets to the public or raise asking prices for sellers. After all, what’s more important: that something is authentic or that people think something is authentic? And who cares either way, so long as it doesn’t hurt the bottom line?

Through it all, two figures float above the madness. The first is Dianne Modestini, the woman hired for the painting’s initial restoration and who first suspected it might be an original da Vinci. Of all the people in the film, she seems to be the only one who acknowledges the painting as a work of art and appreciates it as such. She seems to care nothing for how much it’s worth or whether or not it’s truly authentic: it exists, it is beautiful, and therefore it is worthy of admiration and love.

The second is the figure of Christ himself staring out from the darkness. If the film has one flaw, it’s that it misses the central irony at the heart of this story: All this controversy, backstabbing, and greed revolves around a painting of a man who raged against the wealthy and lifed up the poor. This was a painting made to inspire religious devotion toward a savior who drove moneylenders from the temple and said the meek would inherit the earth. Fortunes were made and lost over this image of a man who told the wealthy to sell all that they owned, give the money to the poor, and follow him. Did anyone at any point in the making of this film wonder whether, if Jesus could feed 500 people with five loaves and two fishes, how many more he could feed with nearly half a billion dollars? Suddenly Jesus’ face in the painting doesn’t seem so blank. Is that exasperation or resignation we read? If it isn’t, maybe it should be.

An earlier version of this review appeared at http://www.unseenfilms.net/2021/09/nate-hood-on-lost-leonardo-2021.html?m=1