Not All Who Wander are Lost: Nomadland Offers a View of Community 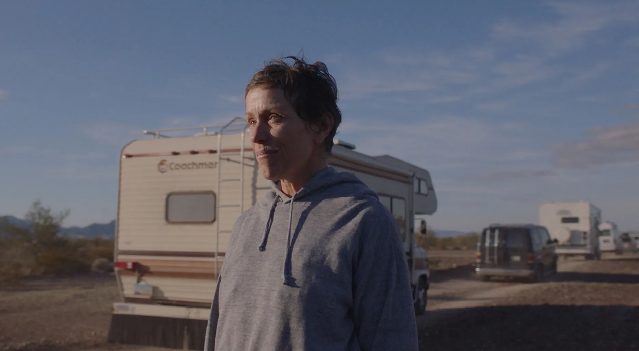 The religions known as Abrahamic begin with stories about nomads and refugees. The Book of Exodus tells the story of slaves who escape from Egypt after a series of environmental disasters.   During forty years in the wilderness, the Hebrews establish the basis for a new way of living.   Jesus of Nazareth could have been a migrant worker  involved with construction projects.  He became a teacher and a healer who visited  different places in the ancient Middle East.     Religion for the Prophet  Muhammad was more than a personal matter.   Like Jesus,  he  emphasized the importance of economic justice and mutual aid.  He began his adult life involved with desert caravans.

We are all familiar with the refugees who come here from other countries, but we have internal nomads and refugees as well. The United States is aging.  Some of the baby boomers are comfortable in retirement, but many have lost homes, pensions, savings, and the respect of their neighbors.  Many worry about medical expenses  and long-term care arrangements. Many of the boomers want to work, but work can be hard to find after you reach a certain age.

The sixties counterculture may have talked  about living the simple life,  but it's the old folks who know what "downsize" means.  At the end, too many elders search for shelter and a good meal.

In the highly acclaimed new film Nomadland, Fern  (played by Frances McDormand) is part of a new counterculture. She is a baby boomer who may have been part of the  1960s counterculture,  but, recently widowed and unemployed, she travels alone in her van. As she goes from one short-term job to another, she meets a community of sorts: other elders and displaced workers who gather at “campfires” in the desert  for mutual aid and support.   The travelers provide each other with  survival tips for the U.S. wilderness. In some ways, it's an old story, but it takes place in an age of solar panels and computers.

Fern explains her situation:   "I'm not homeless.   I'm just house-less.   Not the same thing, right?" Fern is seldom angry, rarely self-righteous, but often a bit sad.  She offers some encouragement to a young man she meets, but she certainly doesn't preach revolution.  If you're looking for a protest movie about the unhoused or the elderly,   Nomadland  will be a disappointment.

Some critics have expressed surprise that "very little happens"  in this movie, even though it has some sex, drugs, and rock and roll.   Aging is the new frontier, and this film reflects on it. There aren't many playbooks for seniors who are on their own and searching for a better life.

"What did your father do when he was your age?"   asked one of my friends.      The answer was simple.    I'm in my seventies, and Dad died from a heart attack while he was in his fifties.  Dad was a workaholic who died because of job-related stress.   His own father  was a member of the International Brotherhood of Electrical Workers, Local 103,  and he was a master electrician who received a good pension.   When Grandpa  slipped into dementia and became dependent on others, Social Security and Medicare provided some of  the support that he needed.

Maggie Kuhn came to mind while I watched Nomadland.   Kuhn joined with others during  the 1970s to establish the Gray Panthers.   The Gray Panthers was never restricted to  senior citizen advocacy.   It was  always a multigenerational organization that addressed a variety of social and economic justice topics.   "Age and  Youth in Action!" was the  slogan that  Kuhn encouraged.   Unlike the AARP and most retirement groups, the Gray Panthers connected to the concerns of low-income people and  identified itself with  other organizations that challenged social oppression.

Senior environmentalists are called "gray greens."   In Florida, where I live,  some of the gray greens have become involved in the Gray Panthers and many try to use the Jemez Principles for Democratic Organizing,which encourage .groups to be inclusive, organize from the bottom up, let people speak for themselves, work together in solidarity and mutuality, build just relationships within the group, and commit to self-transformation

Gray Panther groups still exist in a few places, although the movement is much smaller than it was when Kuhn was alive.  Conditions are good for its re-emergence. Because of the COVID-19 pandemic,  the impact of climate change, homelessness,  and a long list of  other concerns,  a new emphasis on multigenerational organizing is needed. In 2023, one in five Americans will be past the age of sixty-five.  Some baby boomers are comfortable in retirement, but many have been pushed to the margins, in all races, in all ethnic groups, and in every region. As long as they can be kept divided, they will compete with each other for attention and resources. If young people and older people unite,  progress becomes possible.

Some of the old ones are in the desert   at  campfire gatherings that  Moses, Jesus, and Muhammad might recognize.   There's a need for economic justice for the seniors and there's also a need for something that's very spiritual.  Although little is said about religion in the film, Nomadland  helps to explain the longing and need for deeper meaning and connection.

Robert Murphy, a Unitarian Universalist minister emeritus who lives in an assisted living center in Florida, is a member  of the Pinellas County DSA. He is involved in environmental justice work and Gray Panther organizing in the Gulf Coast region.