Out and Out the Door! Leaving the Methodists 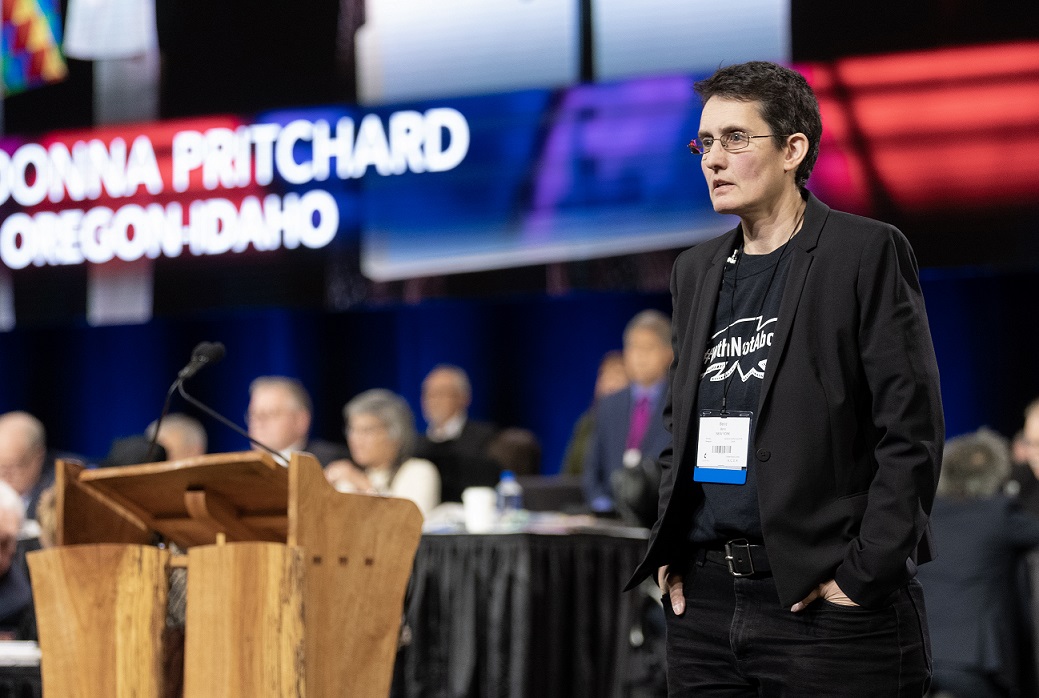 On June 8, 1019, Dorothee Benz submitted a letter of resignation from the United Methodist Church to Bishop Thomas Bickerton. After years of highly visible activism to gain full rights for LGBTQI people within the denomination, Benz, who is also Chief Communications Officer for Lambda Legal, had had enough. She has shared her letter with RS and written a postscript about the aftermath. Benz is a longtime member of the DSA Religion and Socialism Working Group. Her article on biology, culture, and the struggle for gay liberation appeared in the January/February 1994 issue of DSA’s Democratic Left and is still good reading today. —Eds.

I am writing to resign my membership in the United Methodist Church, effective June 10, 2019.

I have been a part of the UMC since immigrating with my family to the U.S. in 1968. I abandoned a call to ordained ministry in 1984 when the General Conference first voted to categorically ban queer people from ministry. In place of a life under constant threat and/or constant self-harm by denying my authentic whole self, I “chose” instead to follow Jesus through a lifetime of social justice organizing. It has been a rich and rewarding life, but 35 years later I still ache every time I see someone in a clerical collar.

I have dedicated the last 15 years of my life to the struggle to right the immense wrong that the UMC has done to God’s creation with its theological lies and spiritual violence aimed at LGBTQ people. In that time I have come to understand, painfully, that institutional leaders – and I am sorry to say, bishops foremost among them – have valued institutional preservation over Gospel obedience; have treated LGBTQ people as a “problem” to be “solved” rather than their own flesh and blood; and have so perverted the ideal of unity as to make it synonymous for queer Methodists with injustice. The UMC values order over justice, “a negative peace that is the absence of tension over a positive peace that is the presence of justice.”

Rather than resolving these problems, the special General Conference in February doubled down on them. The aftermath has been positively horrifying to watch. We have learned nothing, apparently. And now the energy and time and resources of thousands of earnest Methodists is being poured into electing 2020 General Conference delegates and looking, delusionally, at that gathering for hope.

I can no longer participate in this charade.

We live in a world in which climate genocide is imminent, where irreversible environmental changes caused by wealthy white first-world capitalists and their governments are threatening millions of the world’s poor. We live in a country where our government is caging children and carrying out a program of ethnic cleansing, while domestic terrorism aimed at non-white and non-Christian people is rising exponentially. I live in a city where social inequality rivals that of the world’s most unequal nations.

I can no longer put my time and energy into a church obsessed with its own self-interest while injustice around me rises like flood waters. My call to follow Jesus is no longer compatible with my participation in the United Methodist Church.

Reaction to my resignation from the UMC from progressives in the church, both friends and strangers, has been movingly affirming. People I don’t know have shared my letter, calling me a “prophet” and  “one of my heroes”; friends have said things like “I know how to show up in movements and how to be a more faithful follower of Jesus because of you.” One movement leader said, “I hope you know how you have changed everything, how many of us you have trained up in the resistance… how many people you have guided towards liberation.” The right, meanwhile, has celebrated – one comment said, “This is the best news I’ve heard all day” – and deemed my departure significant enough to devote an entire article to it, which I am not linking to because I make it a policy not to give them free press. My bishop also asserted that I had changed him, yet every action he has taken, before and since the February special General Conference, indicates that whatever that change may be, it is not sufficient to have moved him to open refusal of further complicity in the unjust rules of the UMC, which I continue to believe is the only morally viable way to remain in the church as well as the only strategically effective way to transform it.

(Image: Benz on the stage of the UMC General Conference in February 2019 after that body voted to double down on its anti-queer discrimination, queer delegates led a sit-in on the stage, and the conference carried on business as thought they were not even there. Photo by Harry Karpen.)