Planet of the Humans Highlights the Need for Spiritually-Centered Activism 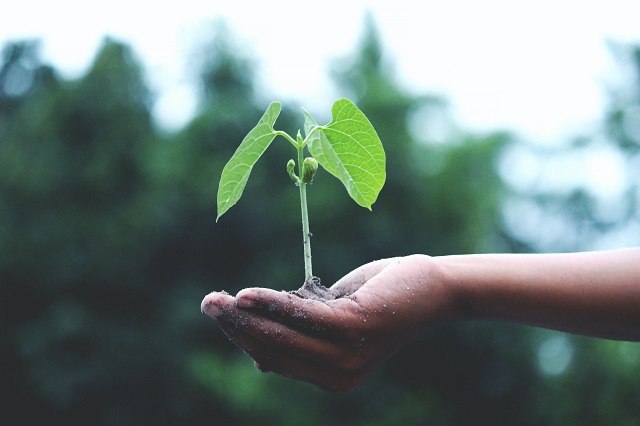 As a printout of Piero della Francesca’s 15th century painting The Baptism of Christ peeks over his right shoulder, Gibbs expresses his concerns:

“The right has religion. And they have a belief in fossil fuels. Our side says, ‘Okay, we’re gonna have solar panels, we’re gonna have wind towers...’ As soon as I heard you talk about our denial of death I’m like: ‘Could that be it? Could it be that we can’t face our own mortality? Could we have a religion that we’re unaware of?’”

Solomon agrees and gives a brief synopsis of TMT, adding that the idea we’ll “find more oil” or “solar panel ourselves into the future” is “delusional.”

Gibbs then reflects: “What I’m hearing is that if I haven’t come to grips with my own anxiety about death and life, and presented with a reminder of that, I’m highly likely to make some tragic decisions for the community?”

Solomon agrees and quotes French philosopher Albert Camus: “There’s only one liberty: to come to terms with death. Thereafter, anything is possible.”

“And the intoxication of death will bring the truth; that is what you were trying to avoid.” – Quran, 50:19

One way to move people’s hearts to appreciate something is to remind them of its fragility. Perhaps it was in this spirit that executive producer Michael Moore announced that his 2019 film, Planet of the Humans, would air on YouTube for free in commemoration of the fiftieth anniversary of Earth Day. The documentary positions itself as an exposé of green energy projects, the movements behind them, and the leaders of those movements, who, Gibbs claims, have “sold out the green movement to wealthy interests and corporate America.”

What follows is a dismantling of many environmentalists’ hopes and dreams, as Gibbs travels the United States to explain why green technology is, as co-producer Ozzie Zehner would say, merely an illusion, and is in fact no better (if not worse) than the fossil fuels it is meant to replace. The film leads the viewer to the sense that there is no tangible solution to the “problem” with green energy: a supervillain movie that is pure crescendo, plateauing abruptly into  a grim, nihilistic picture of an inescapable reality.  However, many of its claims are not currently concordant with reality at all (although in the interest of fairness I should note that the filmmakers have responded to this criticism with their own minute-to-minute fact check).

While right-wing critics of green energy projects rejoiced, left-wing environmentalist critics were infuriated. The film, which has now amassed over 8 million views on YouTube, will almost certainly not be remembered as a sombre, revelatory call-to-action but as a dangerously misinformed and apathy-inducing relic of the COVID-19 era that will lead some environmentally inclined activists to distrust Moore for years to come. We would be remiss, however, to throw the baby out with the biomass.

The film does highlight an important issue: although resource-consciousness and green energy are becoming increasingly profitable, profit motives alone have failed to drive us toward a more eco-friendly future at the rates required to mitigate irreversible climate impacts. Government officials bought by fossil fuel lobbyists have not been helpful either, refusing to take the necessary measures even as the need to do so increases.

Not only is relying on profits to propel green projects forward slow, but it carries other risks and shortcomings. For example, if profit is the sole motive, could the green energy lobby become the fossil fuel lobby of the future, delaying our progress to more efficient means of energy production and storage in the name of profitability? And what about populous nations such as Thailand, Indonesia and the Philippines, where fossil fuels are still the most economical option and will likely remain as such for decades to come, barring massive outside investments? Clearly, when it comes to climate change, markets alone will not save us.

The documentary also correctly points out that energy production is not the only thing that needs to go green. “Sustainable oil sands” will always be oxymoronic, but so will “sustainable lithium” for batteries. There are also  concerns around the environmental impact of our food and wars, which go largely unmentioned in the documentary. The list goes on, making it easy to get caught up in an endless loop of despair. If everything is problematic in some way or form, why bother at all? It’s easy to throw our hands up and just accept defeat.

Religion, and spirituality more broadly, is aptly suited to address the despair that creeps into the concerned leftist’s heart. In a world where having hope for a better future is often considered radical, there is no better time for radical, spiritually centered activism to take root across the globe.

Most religions provide a framework for what a person can expect when their time comes to pass away. Typically, where they go for the next life depends on what happened in the current (or former) one. Thus, the faith-centered activist does not ask what they have to lose, but what they have to gain. As the hadith of the Prophet Muhammad (ﷺ) goes:

“If the Resurrection were established upon one of you while he has in his hand a sapling, then let him plant it.” (Musnad Ahmad)

This simple hadith paints a vivid picture of the modern day. Between famine, natural disaster, swarms of locusts, the rise of despotic regimes, and now a global plague, we can often feel that we are living in the end of times already. However, the Prophet (ﷺ) reminds us that even if judgment day itself was imminent, we should not miss the opportunity to make efforts for good. If we reflect upon this, and upon other examples in the Quran and Hadith that remind us that no good deed is too small in the sight of God, and indeed small and consistent deeds are among the best of them all, then it is unquestionable that retreating from the fight for positive change is not an option. Our fate, whether in this world or the next, is not sealed. It is never too late to do good.

In my previous piece for Religious Socialism regarding Ramadan, I spoke about intentionality and internal motivation. Underlying that intentionality is a keen awareness of our mortality and the ephemerality of the world we live in, which is a key factor in coping with the overwhelming sense of doom that often accompanies discussions of climate. The paradigm of this world as a trial with a promise of accountability and better things to come can help put much of humanity’s propensity for greed over broader benefit into perspective. We take it as a trial – and a challenge to do better.

If we make thoughtful, deliberate, informed decisions and advocate for similarly well-intentioned solutions designed for maximal benefit to humanity and the planet, we will have something to bring with us to the next life, where we will be held accountable for this one. If we aim only for short-term solutions, money, and notoriety, the gains will be similarly short term and only last us to our graves (if that), not beyond them. We cannot lose sight of this perspective.

All hope is not lost

Even though Planet of the Humans’ presentation of out-of-date information to paint a misleadingly bleak picture of the climate crisis deserves condemnation, Gibbs deserves artistic credit for guiding viewers toward a keen awareness of mortality; both of their own life and the life of the planet. He also correctly highlights profiteering as a barrier to progress. Unknowingly, perhaps, the film  calls us to a spiritual revolution – a prioritization of morality over profit, an awareness of our limited time on Earth, and an activism that does not give up hope or the opportunity to do better. Planet of the Humans’ argument that all green technology is flawed is misinformed. We no longer lack the means–we merely lack the social and political resolve. In an age of nihilism, apathy, and short-term thought, faith has a powerful capacity to offer hope and bring people together–even in the darkest and most hopeless of days.

It’s time to plant our saplings – whether they grow into money trees or not.

Imaan Javeed is a medical student at the University of Toronto interested in the intersections of science, spirituality, politics, and health.

Photo by Akil Mazumder from Pexels