Poisoned at the Roots: On Christians and Donald Trump 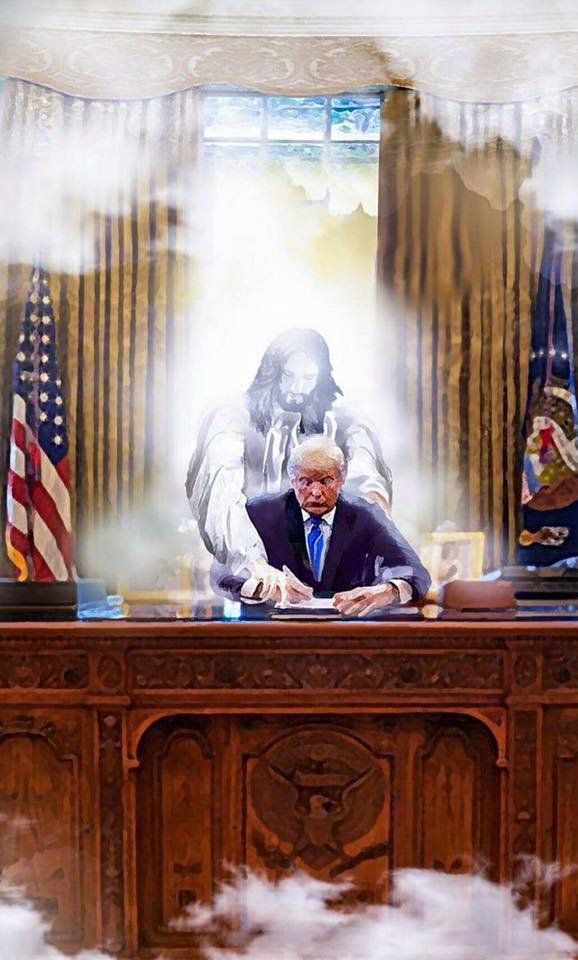 The violence of U.S. life, from police brutality to entrenched economic exploitation, is regularly blamed on “bad apples”— individual aberrations in an overall just and good system. The election of Donald Trump as president of the United States makes it plain that we are dealing with more than rotten apples or even rotten trees, but with an orchard rooted in white male supremacy and exploitative capitalism. This twisted orchard has been planted and sustained by many, but white Christians are some of its primary cultivators.

Throughout the presidential campaign, Trump revealed himself as a devilish principality incarnate (Ephesians 6:12), but the initial exit polls indicate he received overwhelming support from white Christians who voted: 81% of self-described evangelical Christians, 61% of Mormons, and 60% of white Catholics. Those who attended weekly religious services voted for Trump over Hillary Clinton 56% to 40%. There are complex narratives and histories in these numbers, and the 43% of eligible voters who stayed at home were essential to Trump’s victory. Yet across the board, white conservative Christians who voted backed a racist, exploitative autocrat and sexual predator.

As some noted, Trump offered these Christians the kingdom, and they said yes. Like Satan tempting Jesus in the desert, Trump promised protection, an America that would be frictionless for Christians, a life of discipleship free from the way of the cross to which Jesus calls his followers. (Matthew 16:24).

This is nothing new. White people in this country have long been promised a Christianity without the cross. Suffering and crosses are for others, and this resounding yes to Trump is a confirmation that white identity is based upon the crucifixion of all that is not white. The cross isn’t something we bear, it is a weapon we deploy, and white Christians use it to help the U.S. orchard produce its terrible fruit.

Yet, this isn’t a simple indictment of Republicans, conservatives, or evangelicals as the devil and the Democratic Party as saints. The neoliberalism  of Hillary Clinton and the Democrats is just as idolatrous and deadly. Witness the country’s state of perpetual warfare, Clinton’s support of the 2009 coup in Honduras, the deportation of more than 2.5 million immigrants under Barack Obama, maintenance of the prison-industrial complex, and continuing decimation of the working class through “free and fair” trade deals. In the long U.S. tradition of crucifying the oppressed, others may do the actual nailing, but white Christian liberals provide the nails; in the crucible of violence, liberals stand there talking about the low unemployment rate, quoting Martin Luther King Jr., and recommending pragmatic, incremental change.

The election of Trump doesn’t create a crisis of identity for U.S. Christians, but a clarity of identity—too many of our communities worship a false god. A Jesus who promises security and abundance through oppression and dominion is not the Jesus of the Gospels. A Jesus who calls for unity at the expense of justice is not the Jesus who said “think not that I come to bring peace.” A Jesus who approves of drone strikes and ignores economically ruined rural towns is not the man who promised that the meek would inherit the earth. A Jesus who ignores the lynching tree, ecological devastation, and economic subjugation is not Jesus.

The Jesus many white Christians worship is formed by the story, structure, and practices of white supremacy and capitalism. He is not the Christ who died a criminal on a cross and rose from the dead. Christian support for Trump points to a distorted way of living, being, and imagining from which we need to be saved.

Jürgen Moltmann, in The Crucified God, notes that the cross of Christ stands in judgment of the “religion of fear” and justifications of oppression in the name of identity or security. The executed criminal who is worthy of worship is the original blasphemy in the violent, exploitative spaces of empire. This blasphemy is our salvation. Moltmann goes on to say,

To be radical of course, means to seize a matter at its roots. More radical Christian faith can only mean committing oneself without reserve to the ‘crucified God’. This is dangerous. It does not promise the confirmation of one’s own conceptions, hopes and good intentions. It promises first of all the pain of repentance and fundamental change. It offers no recipe for success. But it brings a confrontation with the truth. It is not positive and constructive, but is in the first instance critical and destructive….The ‘religion of the cross’, if faith on this basis can ever be so called, does not elevate and edify in the usual sense, but scandalizes; and most of all it scandalizes one’s ‘co-religionists’ in one’s own circle. But by this scandal, it brings liberation into a world which is not free. (The Crucified God, p. 39)

Jesus says in Matthew 7:20 that “you will know them by their fruit,” and the fruit of the American orchard is broken bodies, continual war, and a racist, exploitative status quo. The end of these poisonous fruits cultivated by white Christians requires more than civil conversations, feel-good propheteering, or vague notions of solidarity. It requires an uprooting. As Archbishop Oscar Romero said, "Violence will keep changing in name, but violence will always remain as long as there’s no change at the root, from where all these horrible things are sprouting. "(quoted in Óscar Martínez, A History of Violence, epigraph)

Resisting Trump is essential, but the change that we work and hope for must be as deep and vast as the systems that created him. The truly radical call, what the cross of Christ asks of us, is to seize the matter at the roots, to struggle to clear the ground so that free and full life may sprout.

Adam Joyce is a writer and editor who lives and works in Chicago.