Pride in the Age of Trump 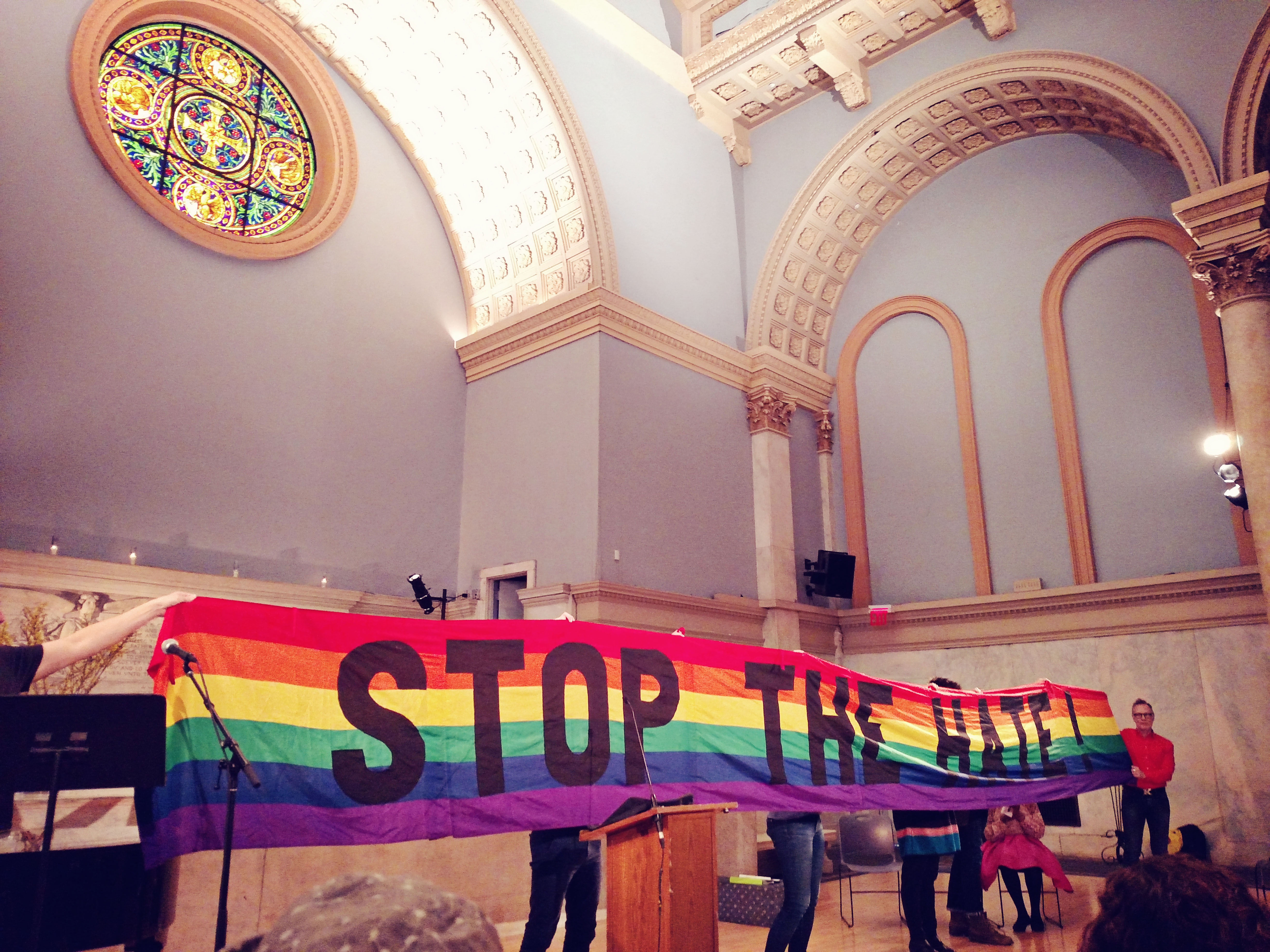 Granted, I haven’t been flying it all that long. It’s been far harder to carry in years past, I know. Still, many of us—both LGBTQ people and our allies, both younger and older—have entered this month of pride with an inner limp.

The euphoria that followed federal recognition of same-sex marriage through Obergefell v. Hodges feels long gone, and last year’s Pulse massacre feels like yesterday—and like today. So many of our queer kindred are living in fear of hate crimes, deportation, disenfranchisement in various forms. We are haunted by the resurgence of conservative religious figures and forces that have been trying, for decades, to destroy us. While recent progress led many of us to feel confident that we could ride securely on the winds of our nation’s politics, those winds vanished last November, and our confidence has crumbled. A storm that scorns the vulnerable has now settled in. Under these conditions, waving the flag can feel like carrying a cross.

That’s nothing new for the LGBTQ community, of course. We’ve survived and thrived in similarly formidable storms. To do so again, we must remind ourselves who we are, must revive the strategies that brought us this far, must rely on the cloud of queer witnesses who went before us and who surround us.

In this spirit, I offer three exhortations— time-honored, freshly-considered—for anyone willing to wave the rainbow flag in these frightening days.

It’s more than marches and demonstrations, meetings and coalitions. It’s more than raising our voices, our signs, our fists, and our fingers.

At its root, the word protest simply denotes public witness: to see or hear or feel something, then to say what you’ve seen or heard or felt—whether good or evil. On any given day, you and I witness instances of justice and injustice, empathy and indifference, life-giving deeds and death-dealing blows. To protest means to testify, to choose to say, “I saw that.”

You can say it on social media, over coffee with a discouraged friend, in an onerous conversation with your racist uncle. However you protest, do it often, and remember to elevate the good at least as often as you denounce the evil.

It’s more than a thrill, a release, or an escape. The spirit of celebration dwells in the members of the LGBTQ community. We are a people of parades, a people of audacious joy in the midst of suffering and grief.

In his striking essay "Pulse and the Power of Queer Tears" for Slate, J. Bryan Lowder observes that the grief of LGBTQ people is frequently manifested in exuberance, frivolity, and “too muchness.” In fact, one could make a comparable observation about celebration in the Christian tradition. In the Gospel of John, as the crucifixion approaches, Jesus praises a woman named Mary for lavishing priceless perfume on his feet and sensually wiping them with her hair as an act of preparation for his death. Throughout Christian history, a site of incomprehensible suffering, the cross, has been exalted as the ultimate symbol of victory and life. (Not to mention that Jesus was apparently known for getting his drink on with disreputable crowds.)

You can do it at home, in a club, out in nature. However you party, do it with purpose. In the face of too much pain and too much fear, choose too much joy and too much love.

It’s more than a religious ritual. Rev. Donna Schaper writes that prayer is a human leaning toward the edge. When we pray, we are reaching out to someone or something beyond ourselves. If we are praying for help, we are acknowledging that we can’t do this—whatever “this” is—on our own. If we are praying out of gratitude, we are recognizing that we have received gifts for which we cannot take credit. To pray is to look outside of ourselves, to move beyond what we already know, and to inch our way into the dark, trusting that there is sustenance for our journeys yet to be found.

You can speak out loud, write on a page, ponder silently in your mind and heart. You can begin with “Dear God” and end with “Amen,” if you want. You can also just sigh slowly or laugh deeply. However you pray, don’t stop there. Go protest. Go party. Pray in ways that help you protest and party better.

Pray for strength to carry the cross of the rainbow flag, and pray that it will feel lighter down the road.

William Stell is pastor of the First Presbyterian Church in Bordentown, New Jersey.This piece appeared in his column on the HuffPost Contributor platform on June 13, 2017.