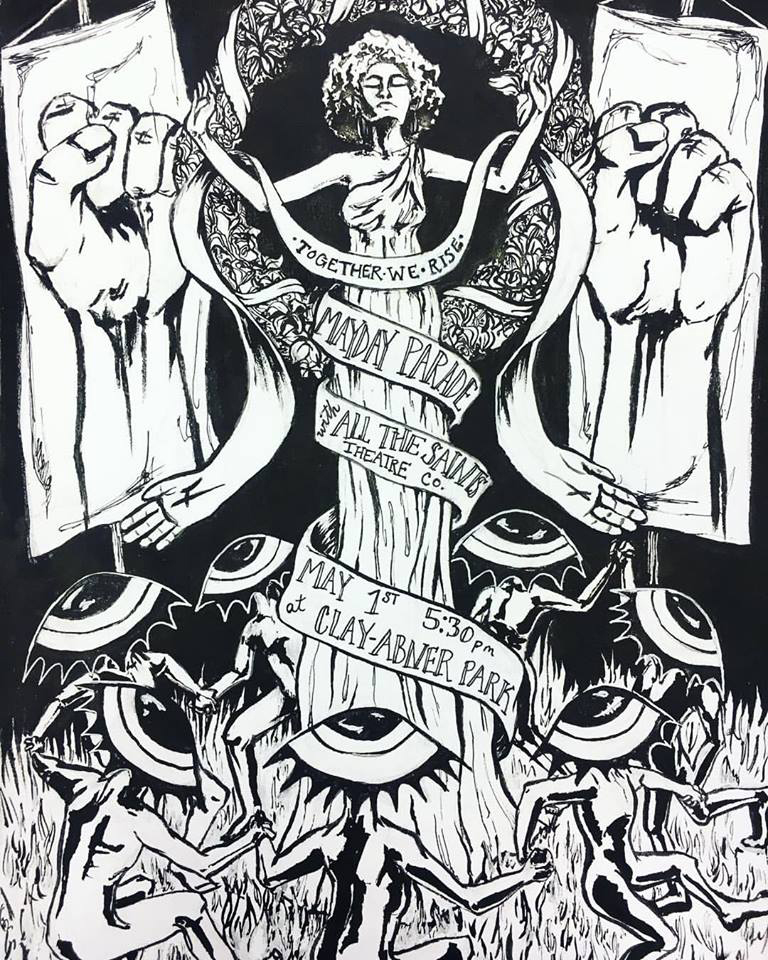 On a warm and windy Beltane (May Day) of this year, under heavy clouds pregnant with storms, I found myself sitting in front of city hall in downtown Richmond, Virginia, holding a flag, surrounded by comrades making demands.

The powers that be had locked the doors as several hundred of us arrived – drums and whistles, flags and papier-mâché puppets leading the way – to attend an ostensibly public budget meeting.  A legislator had been persuaded to come out and hear what we had to say.  We chanted our demands: Sanctuary for all! $15 an hour! Money for schools! Community policing! And many more.

The chants were dying down when someone in the crowd shouted: “ICE out of RVA!” (Richmond, Virginia) That cry – local, urgent – brought us to our feet, dancing, stomping, and screaming. Drummers backed us as we chanted in the face of this bemused and speechless politician.

This moment is the magic of the people, passionate and hurt, who know truth when they see it.  It is the magic of a march, when the moment hits and everyone knows what they want (Justice!) and when they want it (Now!). That group communing is intensely beautiful and glorious, inclusive and unyielding.  It’s the magic I feel at very good rituals when real group mind is achieved and all are in the same mental and spiritual space – transcendent.

I have attended, participated in, and performed more rituals than I can count in the 15 years that I’ve been a practicing Pagan.  My experience has taught me that an effective group ritual requires a clear sense of purpose, engagement of all the participants, a strong sense of unity – and, perhaps, the challenging of norms and taboos.  After all, accomplishing something new may require pushing the limits of what you think is possible.

Rituals are fundamentally about change.  It is a coming together of people to use their personal power and connections to the Earth, deity and each other to help create something new.  And unlike, say, an angry mob or a riot (as far too often protests are falsely termed), the energy with which people approach ritual and protest is of a clear sense of purpose, change, and of personal empowerment.  Rather than surrendering yourself to a cacophony, you are adding your voice to a song.  Rather than losing your identity to the group, you are amplifying yourself through the power of community.

And while the magic occurs spontaneously, in both cases it is set up for success by careful planning and hard work of organizers beforehand through the sometimes unappreciated infrastructure that supports these events.  During that May Day march, I realized that I was in the midst of an incredible community ritual the likes of which I had never thought to experience.  Once I saw protest through this lens, it radically reoriented my practice, both religious and political.

I think of Paganism as a folk religion.  The word itself, “pagan,” basically means hick, country-dweller.  And while there are almost as many ways to practice as there are practitioners, Paganism is, to me, a faith that ties deeply to the Earth, to natural cycles, and to the community.  These are things that, I think we all can agree, are sick today.  In a very practical sense, I believe that thinking of protest as a ritual both gives my actions and energy added weight and power as well as providing me with an incredible sense of personal spiritual connection.  Our chanting, our passion petitions the gods of our cause to lend us their aid.

As a devotee of Athena, a warrior for justice and wisdom, each time I put my energy or myself at risk in service of these causes, I do it as an act of devotion to her.  As a witch, I feel that each time we chant together, march together, sing together we are channeling our energy to accomplish a tangible goal -- Liberation for All!  These rituals and group magics sustain and carry us through the more discouraging, frustrating work of creating the better world we know is possible.

Another use of ritual is as a rite of passage, a way of coping with a painful change, to mark an ending and beginning.  I experienced this on August 13th, when a candlelight vigil for Heather Heyer and the victims of the terrorist attack in Charlottesville the day before (several of whom are members of our local Richmond community) became an impromptu march through our city streets.  And at one moment, as we all stood confronted by a monument to hate -- a controversial and still-standing   statue of Robert E. Lee -- we poured out our grief, pain, and betrayal as a people standing side by side in mutual support and love.

Ritual can weave people together, their fates and their hearts, and protest can, too.  When we stand together in love and rage in the street – often ragtag, sweaty, unprepared and unscripted – we form bonds of camaraderie, trust, and solidarity that transcend the ordinary and reach into the divine.

For me, my faith at in those moments is real and tangible —

Wendy Boynton is a member of the Richmond, Virginia DSA chapter and the DSA Religion and Socialism Working Group.