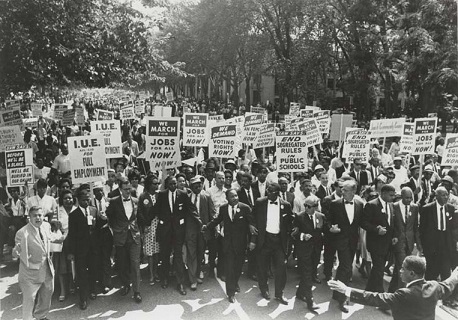 On the forty-seventh anniversary of the assassination of Martin Luther King, Jr., Andrew Wilkes offered these remarks at a workshop sponsored by New York DSA. They have been adapted for publication.

For Reverend Dr. Martin Luther King, racial justice and economic justice are inseparable. The conventional narrative is that King became radical after the 1966 Chicago campaign that addressed fair housing, equal employment opportunities, and restrictive covenants. Alternatively, some claim his radicalism originated with his Riverside Church speech against the Vietnam War in 1967. But the historical record says otherwise. In July 1952, King wrote to his sweetheart, Coretta Scott. In that letter, the twenty-three year old, reflecting on Edward Bellamy’s socialist classic Looking Backward, which Coretta had given him, says “I imagine you already know that I am much more socialistic in economic theory than capitalistic. . . . [Bellamy] says that today capitalism has outlived its usefulness, it has brought about a system that takes necessities from the masses to give luxuries to the classes.” What this means is that three years before the 1955 Montgomery Bus Boycott, for virtually his entire public career, King had a specific commitment to democratic socialism.

For deeper investigation, I recommend that everyone purchase Michael Honey’s edited collection of King’s speeches on labor rights and economic justice. It’s titled All Labor Has Dignity and is the best resource of its kind for a general audience.

Forty seven years ago, King was assassinated while mobilizing sanitation workers from AFSCME local 1733 in Memphis, Tennessee. In the preceding months and weeks, he denounced the payment of starvation wages in a rich nation. Further, on March 18, 1968, King called for a general strike in the city of Memphis. In a creative appropriation of the Good Samaritan story, he proclaimed that the whole Jericho road “must be transformed so that men and women will not be constantly beaten and robbed as they make their journey on life's highway.” In other words, a system that produces and reproduces poverty needs more than compassion--it needs fundamental restructuring. Toward the end of his life, King begins to call for a guaranteed annual minimum income. He’s reading the economist John Kenneth Galbraith. He’s speaking with Michael Harrington and others to sketch a policy vision and set of first principles for the Poor People’s Campaign. Toward the end of his life, King points out that the enemies of labor are generally enemies of  the Negro. Is this not still true today? Are not the opponents of living wages, paid sick leave, predictable work schedules, are not the antagonists of giving working folk a decision-making power over the means of production and distribution frequently the antagonists of folk of color—and we might add of women, LGBTQ folks, immigrants, and others?

At this hour, King’s legacy still speaks to us, in particular two points concerning leveling inequality and creating an alternative economics.

The first point is his insistence on the indivisibility of justice. He often tethered the struggle for racial equity to the moral imperative of economic justice. For King, we are caught up in a mutual destiny. Whatever affects one directly, affects all indirectly. And therefore injustice anywhere is a threat to justice everywhere. Everyone has a stake in our economy flourishing-- workers, residents, management, immigrants, faith communities, ethical societies, activist groups, everybody. When undocumented households suffer wage theft and insecure work arrangements, that’s not solely an undocumented issue. It’s a moral issue that affects all households, a political economy issue wherein one class of workers is deprived of economic dignity and decision-making power over the terms of their employment. The fight for $15, indexed to inflation, is about more than boosting take-home pay and family sustaining wages. It’s about the buttressing the unity of labor. It’s about recovering the profundity of that protest proverb: the people united, will never be defeated. When workers in the car wash, retail, fast-food, healthcare, and building service industries know that teachers, faith leaders, artists, writers, and others stand together for an equity agenda, that’s the beginning. It’s the beginning of building a base. It’s the beginning of an increase in common folks’ bargaining power and collective voice so that we can make economic equity a progressive reality in our city and across God’s creation. It’s a radical nucleus that can negotiate for renewed funding in the City Council to strengthen the Worker Co-Op Fund. It’s true that analytical distinctions are helpful for clarity of thought. It’s also true that resource constraints prevent us from tackling every issue at the same time. Nevertheless, we can insist on prioritizing our issues within a larger, yet contextually defined narrative of equity and equality in our economy. That’s a key economic implication of King’s focus on the indivisibility of justice.

Second, King's economic legacy speaks to the insurrection of justice. King said frequently  that change does not roll in on the wheels of inevitability. Instead, change comes through the tireless exertions of those who care for it enough to toil for it. He said further that freedom is not voluntarily given by the oppressor or those in power. It must be demanded by the oppressed, by the marginalized. The Real Estate Board of New York City is not lining up for structural change in housing. Its members adjust to new administrations but they have not yet indicated interest in reconfiguring the balance of power in this city. Chambers of Commerce and even business improvement districts are not concerned equally with the rights of all participants in the exchange process of providing and purchasing goods and services. A key portion of King's economic legacy is his understanding that it takes clear political reasoning, solid economic analysis, and a revolution of values to move us from being a thing-oriented society to a person-oriented society. And not only that, we also need sustained movement building to create a new governing coalition in New York City and beyond that dramatically expands and changes altogether the decision-making table.

Reverend Andrew Wilkes is the associate pastor of young adults and social justice at the Greater Allen AME Cathedral of New York. An alum of Hampton University, Princeton Theological Seminary, and the Coro Foundation's Fellowship in Public Affairs, his writing has been featured in the Washington Post, BET.com, and the Huffington Post. Follow him on Twitter and Instagram: @andrewjwilkes