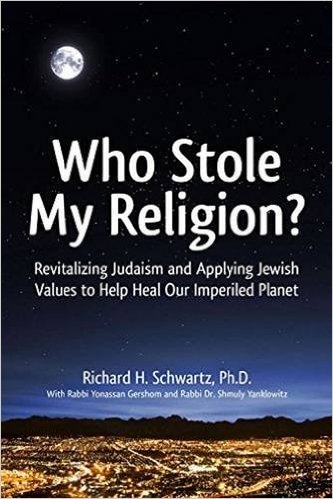 Who Stole My Religion? Revitalizing Judaism and Applying Jewish Values to Help Heal Our Imperiled Planet

Watching the enthusiastic response to Donald Trump’s talk at the American Israel Public Affairs Committee (AIPAC) Policy Conference this past March, one might not believe that Judaism is a radical religion. After all, this was a man who had previously insulted Mexicans, Muslims, women, media members, and even Jews.  But Judaism has a long tradition of protesting against greed, injustice, and the misuse of power. From the prophets of Jerusalem in the First Temple era to East End sweatshop strikers, Jews have stood up for social justice.

In his updated, revised, and expanded second edition of Who Stole My Religion? Richard H. Schwartz reminds us of these values--so inherent to Jewish writings and history, and so absent from large parts of American and Israeli Jewish politics today. This absence is especially marked in Orthodox communities in which Schwartz, as an orthodox Jew, focuses. [Full disclosure: I have worked with Schwartz on vegetarian, animal rights, and related issues. He often speaks at the Jerusalem-based Israeli Jewish Vegetarian Society center, where I am a coordinator.]

Schwartz reminds us of the Torah laws that limit accumulation of wealth and redistribute it equitably. These include the ban on taking interest on loans, the cancellation of financial debts on the Sabbatical year, and the Jubilee law. Land was originally divided among the people of Israel based on the size of the tribe. To avoid distortion of this just allocation, a complete redistribution of land was to be done every 50 years, when all land would be returned to its original holders. Impractical as these laws may be today, the principles underlying them can still guide us. We are all acquainted with the statistics according to which the top 1% possesses more wealth than the poorest 90%. This, Schwartz reminds us, is not just outrageous; it is in contradiction with core Jewish values.

Equitable distribution of wealth is but one of the ideas of social democracy that Schwartz finds in Jewish teachings. Solidarity is another one. Biblical laws oblige the rich to share with the poor. A farmer must share the harvest: the corners of each field, corn that was dropped, sheaves that were forgotten, all were the rightful property of the poor. The Shabbat might have been the first labor law in history. As Schwartz maintains, "the biblical idea that all people (and animals) deserve a day of rest each week, and days for worship and communal celebrations, is under attack in our society," where many employees need to work 7 days per week and many are expected to be available 24/7.

Modern capitalism, argues Schwartz, is inconsistent with core Jewish values. It is based on selfishness instead of on the mandate to “love thy neighbor as thyself.” In the name of profit, it breaches the sanctity of life by trading arms and dangerous products and allowing dangerous labor conditions and poisonous emissions. Advertisers reduce those who buy products to "consumers" and appeal to their greed, vanity, insecurity, and competitiveness. "While Jewish values are epitomized in the visions of prophets," sums up Schwartz, "many capitalists dream mainly of profits."

Schwartz's call of awakening to Jewish communities is not limited to views on the economic system. The book offers progressive perspective on U.S. foreign policies;  the way U.S. Jews relate to Israel; current sentiments on Islam and Muslims; the environment; our treatment of animals, and more. On the Israeli-Palestinian conflict Schwartz emphasizes the importance of reaching a just, comprehensive, sustainable, mutually-agreed-upon resolution to the conflict. He maintains that the current status quo is harmful for Israeli society, both internally and externally. He commends efforts and initiatives to seek peace based on the two-state solution.  Again and again, he links progressive thoughts to Jewish values.

The subtitle of the book indicates one of Schwartz's main concerns. It is "Revitalizing Judaism and Applying Jewish Values to Help Heal Our Imperiled Planet." The environmental crisis and the catastrophic consequences of climate change have been underlying Schwartz's activism for many years. Of course, the environmental crisis is closely connected to our economic system. The system is led by greed and selfish, short-sighted attitudes that end in drought, famine, and war.  The major role of the livestock industry in degrading the environment led Schwartz to adopt a vegetarian diet back in 1978, and later a vegan diet. Indeed, in this book, as in his Judaism and Vegetarianism, Schwartz argues that a series of important Jewish laws and values mandate, in our era, the adoption of a vegetarian or vegan diet.

Now, imagine the AIPAC conference hall, packed with vegan socialists applauding speeches on peace, tolerance, animal rights, and assisting third world economies. Truly, someone stole Richard Schwartz's religion! Yet, his book is far from pessimistic. Though he admits that in his life he sometime felt alienated within his synagogue, his message is not of frustration but of devotion and inspiration.

Schwartz often cites the prophets of ancient Jerusalem, who harshly attacked the priority of ritual over justice among the elites of their time. He is inspired by Rabbi Abraham Joshua Heschel, who criticized the tendency to follow religious laws technically without any real devotion and without relating them to the realities of society. Who Stole My Religion goes in the same path. In his preface to the book, Schwartz states in what it means to him to be a Jew. One paragraph reads, "To be a Jew is to feel deeply the harms done to others, to speak out in the face of wrongdoing, and to prod the conscience of those who passively accept the status quo." This paragraph, like the others, and like the rest of this book, has an inspiring message relevant for humanity.

Yossi Wolfson is an Israeli human rights and animal rights activist and Coordinator of the Israeli Jewish Vegetarian Society.