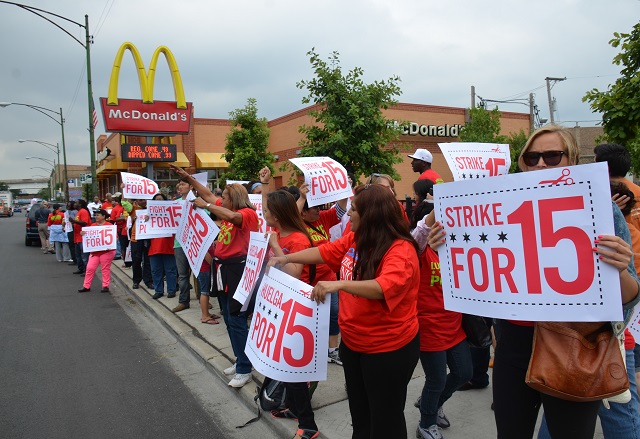 The DSA’s highest priority in the coming weeks is pushing for the PRO (Protecting the Right to Organize) Act, fixing U.S. law so that workers and unions can build the power to that leads to a Green New Deal and a just economy. Multiple religious groups have enthusiastically lined up alongside DSA and unions in this cause. Several organizations from different faith traditions last month co-authored a letter to members of Congress urging swift passage of the law ensuring workers’ rights to organize into unions and collectively bargain for fair pay and working conditions.

One of those religious groups, NETWORK Lobby for Catholic Social Justice, said, “Catholic Social Justice teaches us that we must invest in the value of human labor, which helps maintain the fabric of our society. With the current labor system structured to favor big businesses and corporations over worker-led unions, the PRO Act levels the playing field by making union organizing less difficult.”

Rabbi Michael Feinberg, executive director of the Greater New York Labor-Religion Coalition and an activist in DSA’s Religion and Socialism Working Group who was recently the subject of a profile in Commonweal magazine, agrees that supporting the PRO Act is a moral imperative. “The right to form a union is not only a basic democratic right, it is one enshrined in religious ethics and law, certainly one found in Jewish rabbinic tradition,” he says. “It is the recognition that in unionizing workers can gain collective power to level the field with employers and owners--this is critical in a time of such obscene wealth inequality.”

The PRO Act addresses that inequality by breaking down some of the legal barriers that have blocked working people from coming together to demand fair wages and treatment. Before the Covid pandemic, U.S. unemployment rates were low and workers very much in demand, especially in globalization-proof roles like home health care and food service. Workers overall were also far more productive and better-educated than at any time in history. Yet wages were not keeping pace, with over 40% of U.S. workers struggling in low wage jobs.

Why didn’t increasing demand and more productivity lead to higher wages? Because unions have lost their power to increase the pay of their members and raise the wage floor for other workers, say experts like Professor Colin Gordon, a University of Iowa history professor. “Shared prosperity, including the expectation of wage gains in the long recovery from the Great Recession, rests on policies and institutions that sustain the bargaining power of workers,” he wrote in Dissent magazine. Gordon says unions serve as a “countervailing force” to corporate and political resistance to raise wages.

But corporate-friendly U.S. law has been blocking unions from assuming that role. Since the National Labor Relations Act was adopted in 1935, its impact has been steadily eroded by amendments and practices that undercut workers’ rights to form unions. The results are easy to quantify: while two of every three Americans support unions and half of them would join a union if they had a chance, only 15% of American workers were union members in 2020.

This weakness of the current U.S. labor movement is no accident: our nation’s labor laws give near-carte blanche to corporations trying to sabotage workers’ efforts to come together in a union. For example, if an employer violates the law, workers can file an unfair labor practice charge with the National Labor Relations Board. But, remarkably, the NLRB is not empowered to assess any penalties.  The stiffest sanction an employer risks is having to reinstate a fired worker and reimburse for back pay, and/or post some informational signage about labor rights.

“It just like if I were to break into your house and take your TV, and the worst thing that could happen to me is that I would have to put the TV back—after I used it for awhile,” says Gordon Lafer, a University of Oregon economist.  So it is no surprise that there is a  documented, widespread record of companies breaking the law to block union organizing, including firing workers who support a union.

Labor lawyer Thomas Geoghegan assesses the state of the current law this way: “Union busting now is almost a science. And the science is a pretty simple one: you go out and fire people. And keep firing until the organizing stops,” Geoghan says. “An employer who didn’t break the law would have to be what economists call an ‘irrational firm.’” Not only does current labor law allow corporations to crush union campaigns, it provides no protection at all for the increasing number of workers in the “gig economy” who are classified as independent contractors, nor to undocumented immigrant workers.

The PRO Act, which passed the U.S. House of Representatives and has the support of President Biden, would go a long way toward fixing this. It would institute fines for companies violating labor rights of its workers, expand the rights of contractors and immigrant workers, and force more honest bargaining by employers. In a critical boon to worker solidarity, the PRO Act would also allow workers to support their sisters and brothers in different companies and sectors who are struggling for fair treatment. So-called “secondary boycotts” are prohibited under current law, but they are a powerful tool that should be available to build worker power. “You take away the prohibition on secondary boycotts, and I’ll organize 30,000 hotel workers in a year,” one union organizer says.

Beyond simply increasing the number of unionized workers, religious groups insist that the PRO Act changes are necessary to respect workers’ most fundamental human rights. The Catholic Labor Network’s statement in support of the PRO Act quotes several Papal encyclicals on the importance of unions, including Pope Francis’ call for worker solidarity. “America’s labor laws are arguably the weakest in the developed world, and this constitutes an open wound to social solidarity. It’s time to begin fixing that, starting with passage of the PRO Act.”

Rabbi Feinberg agrees. “The PRO Act is essential in strengthening workers' basic right to organize: as such it is a covenant, a sacred trust among workers to improve their lives and working conditions. It deserves the support of all people of faith.”