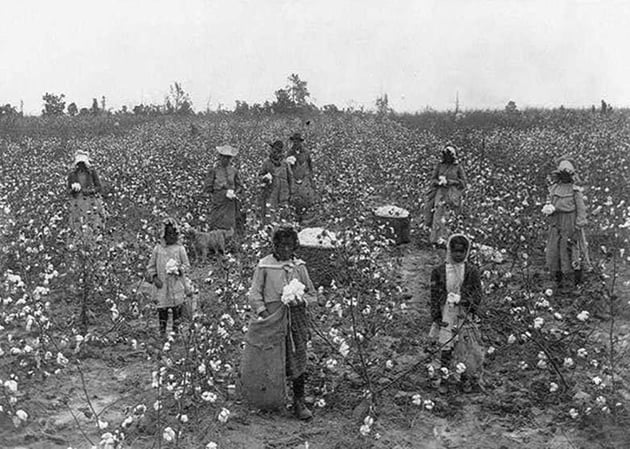 Imagine for a moment that it’s high summer in Mississippi in 1905 and you’re a share-cropper, one of 70% of Black and 36% of white farmers. Off in the distance you hear a roll of thunder, then you cry, "Lord, let that rain and your sun afterwards raise up this cotton I've planted so I can feed myself and my family!"

Ten-thousand thousand times that cry went up in the South between 1866 and 1940, and just as many times the God those men and women prayed to seemed to fail the people. Bellies went hungry. Backs went unclothed. Heads went uncovered. But look again. By and large plenty of rain fell, except for the drought years of  the thirties, and the sun surely shone, so what went wrong? It wasn’t for lack of labor, either. Sun up to sun down the earth was planted and hoed, and the cotton picked and baled. What went wrong? That's easy to see. The land itself wasn't God's, and it surely wasn't the people's. The landlord wasn't God, nor was it God’s children.  It was the Man's. The Man who let the land out on debt to share-croppers or mortgagees or plain old, everyday renters. But let’s focus on share-cropping for a while before making its connection with just about everyone today.

Whatever else the share-croppers of yesterday might do, they had to pay a wallop of their labor to a private party for use of a bit of a planet that no mortal made. As the name suggests, share-cropping was an arrangement in the agricultural sector, common prior to the Second World War, whereby someone with no land and virtually no money could use another person’s land to raise a cash crop such as cotton. The user of the land typically had to surrender half or more of the crop to the land owner. And typically the share-cropper’s payout from the harvest was not enough to pay off debt accumulated over the previous year from purchases of food, clothing, and other staples necessarily made on high-interest credit. Without any substantial cash on hand, millions of U.S. share-croppers had to buy their month-to-month necessities from the only party that would extend credit, a person known colloquially as the local “furnishing man.” There are clear  parallels between share-cropping and pre-Civil War chattel slavery. Both bound labor to a particular piece of land (a share-cropper still in debt at the end of the harvest payout and credit year was legally constrained to remain on-site). Whether by design or by circumstance of a severe money and credit contraction after the Civil War (or most likely by a combination of the two), share-cropping virtually recreated the socio-economic horror of slavery. It recreated the non-reciprocal relationship of someone in possession of a gift of nature, namely land, extorting labor for mere use of God’s Creation. The landowner, unless fully and periodically satisfying the whole of humanity’s economic interest in using the earth, stands as nothing less than a colonizer and usurper of the material, self-existing world.

Karl Marx wasn’t the first to see this last fact, namely that the private possession of land’s economic value destroys reciprocity, but he wrote just as trenchantly on the atter as the ancient Hebrews—“You can’t sell the land because it is Yahweh’s” [to paraphrase Leviticus 25:23]. Or,  as Adam Smith said, “The rent of the land, therefore, considered as the price paid for the use of the land, is naturally a monopoly price. It is not at all proportioned to what the landlord may have laid out upon the improvement of the land, or to what he can afford to take; but to what the farmer can afford to give” The Wealth of Nations, Book 1, Chapter 11.  John Stuart Mill opined, "Landlords grow rich in their sleep without working, risking or economizing. The increase in the value of land, arising as it does from the efforts of an entire community, should belong to the community and not to the individual who might hold title” Principles of Political Economy, Book 5, Chapter 2.  Marx writes of the extortionary quality of private land value ownership in his 1844 Manuscripts: “In the first place, feudal landed property is already by its very nature huckstered land – the earth which is estranged from man and hence confronts him in the shape of a few great lords.”

Alienation from the earth is a socialist analysis of share-cropping. Dispossessed of land, how can labor begin to satisfy needs and wants? During the share-cropping era, labor did push back against the hardships it suffered, but rarely challenged land dispossession itself. The earliest notable effort came through the Farmers Alliance, roughly 1880-1900. This association of desperate small farmers, tenant farmers, and share-croppers boldly demanded severe regulation of the railroads (to include uniform freight rates that wouldn’t favor plantations). It also attempted the formation of state-wide buying and selling co-ops in an effort to attain leverage against the “furnishing man” and large equipment suppliers, and for bulk sales of cotton. The result was modest, scattered economic relief, but no systemic change of consequence. Further, racism undermined the Farmers Alliance’s ability to revolutionize and defeat the culture of domination. Share-cropping permeated the former Confederate states, and most white southern farmers clung to discriminatory behaviors against fellow farmers of color. This race-based canker was largely erased in an organized push in the 1930s by the Southern Tenant Farmers Union (STFU). This much smaller “grandchild” of the Farmers Alliance rose up in the credit-dead years of the Great Depression. To its renown, it squarely faced racism down within its own ranks, proving itself a model of broader minded change strategy. However, the SFTU never challenged the land tenure norms that were and are at the very core of land alienation.

Make no mistake, land alienation is no mere historical feature.   The greater preponderance of the population is just as much alienated from land as were yesteryear’s share-croppers. Most of us operate analogously to share-croppers. Nearly all of us pay over to a private party a portion of our earned income for mere access to the earth. We aren’t farmers, but we do pay a portion of our labor crop, our earned income, for the land where our homes and businesses are. Ultimately a portion of our mortgage or rent goes either to the outright landowner or to the lender of credit for the purchase of the land under our single unit home, apartment complex, or business. So long as you and I are paying a private party for use of the earth, we are share-croppers. To borrow Marx’s term for land alienation, hucksterism, we see that hucksterism can’t be banished except by in some form abolishing private gain from the economic value of land. A Land Value Tax (LVT) is one way to achieve that end. So might be ending private ownership of land, leaving the state as the landlord, though there is scant history of happy outcomes where the state determines land use. Still other proposals exist that strive to end the equivalent modern practical state of share-cropping. What’s sure is that a concerted deliberation of modern-day share-cropping deserves our attention.

To be clear, the proposal noted above, LVT, is not public ownership of land itself, but public ownership of land value. That's an important distinction, because almost every example of state ownership of land has been a failure. What I propose as a possible response to the land alienation question is a 95% or so tax  on the rental value of location. This keeps an authoritarian allocation of land use at bay, yet delivers to public coffers all that otherwise unearned income going to private parties such as myself, Donald Trump, and Diane Feinstein. I own a parcel of San Francisco with a house on it. What I propose would obliterate the $600K in uplift land value equity I've gained since purchasing in 2005. My solace in losing that unearned value would be that society would be properly compensated for my opportunity to call a piece of Creation mine till I no longer wanted it. That’s a healthy reciprocal relationship.

It's in the sense of my unearned uplift equity being at the expense of potential renters having to work harder to pay that uplift that I mean that society today lives a de facto share-cropping model. Without an ounce of effort on my part I harvest the location value uplift created by rising demand. Now think of it, shouldn’t the earth be a social rather than a private good?