Shelter From The Storm: A Look at One Refugee Aid Center 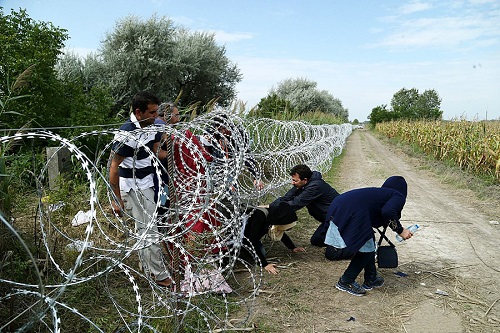 The squalor of tent cities, the thousands drowned in the Mediterranean Sea—these images of the refugee crisis are familiar to every resident of the West. As a distant spectator, one can lose sight of the humanity of those who have become victims of arbitrary agression. Certainly, I had no idea of the scenes I would  witness when I volunteered to work at an aid center in Belgrade, Serbia, while visiting friends in Eastern Europe.

Crossing from Austria, where I was teaching English, I saw crowds of desperate people huddled in parks, behind police cordons, at border fences. Miksaliste, the center where I worked, was near the Sava River waterfront, in a small building barely more than a ruin. It was augmented by a few containers and tents. A distribution center for clothing and food, it was also a place for the refugees to spend a few hours each day away from the transit camp on the edge of the city, where many of them were sleeping. And those were the lucky ones, because many refugees spent their nights in a nearby park.

A small majority of the refugees were males traveling alone, but those who could afford to pay the smugglers had also brought their wives and children. Most hoped to find their way first and then help other family members as well as they could from abroad. Many were young, as well, having fled from conscription by Assad's army or by the Islamic State. Both organizations were desperate for fighters; as one refugee remarked, “You are conscripted for a year in the Syrian Army, on paper. But in reality, once they have you, you fight until you die. So you choose between hope or certain death.” The Islamic State's recruitment policy was no different. Thus, a significant number of refugees were Syrian, although many came from Iraq and Afghanistan, as well as Pakistan, Lybia,  and other surrounding nations.

Miksaliste attracted a few hundred refugees each day. Even when heavy rain fell, that number never dipped below a hundred. They traded their soaked coats and shoes for new ones, and we provided them with a hot vegetarian meal and somewhere dry to rest for a few hours. Medical assistance was also available if needed, and women were provided with backpacks stocked with some essentials such as diapers and other women's and child-care items by a Canadian women's support organization, the Nobel Women‘s Initiative.

When the weather cleared up, the children would play soccer in the courtyard with some of the other volunteers, a few of whom were refugees themselves. These few refugees-turned-volunteers were all from Pakistan and lived in one of the containers on the compound. These men were some of the friendliest I ever met, quick to remember a face, and extremely patient with the refugees, who could be rather difficult at times. In their imaginations, the refugees saw Europe as a paradise, with Angela Merkel, the German chancellor, a welcoming gatekeeper and protector. As they found their way deeper into Europe, harsh reality struck: thickets of barbed wires, crippling debt to traffickers, and the inability--or unwillingness--of European governments to provide help. “There isn't enough money to build shelters, to feed us. So we move on,” one refugee remarked.

At a quiet moment, as I and one of my colleagues rolled a cigarette, a refugee approached us and asked for one. We began to roll another for him, when he pulled two unopened packs of cigarettes out of his coat and surreptitiously showed them to us.  I was astonished at what seemed so blatant an attempt to get a free cigarette. He likely intended to sell those packs, putting the small sum toward paying back the smugglers. Others were quite greedy about food, coffee or tea, or any of the other items we provided, such as disposable razors, soap, tissues, and so on. One group of three refugees insisted on being given a pair of Adidas sneakers sitting on the shelf of donations, despite having perfectly good shoes already. Others left their coats elsewhere and came to us to get another, and then appeared the next day wearing both.

I tried to avoid judgment. What untold sums did they owe the traffickers who brought them across the sea, a journey often costing €10,000 or more? Anything they could sell would bring them one step closer to paying their debts or toward bringing others. What trials had made them so desperate for that one extra cigarette, what hunger pushed them to beg for just another package of chips.

Although these episodes of what seemed to be greed and chicanery were shocking, there were just as many small gestures of kindness: a man moving aside to let a woman with a child take his seat; a teenager  returning food he knew he wouldn't eat; others helping an elderly man carry his food and sparse belongings to a nearby table.

Serbia is not a member of the European Union, but the flow of refugees through it is influenced heavily by European Union policies, and the government receives monetary aid from the EU, as do Jordan and Turkey. The recent agreement with Turkey to quell the flow of refugees, however, does nothing to improve the plight of refugees fleeing the iron fist of the Islamic State nor do the fences Hungarian Prime Minister Victor Orbán has had built around his nation. Fences will not stop the flow along the Austrian-Slovenian border, either.

Support from the European Union does little if it is spent to build fences or to increase funding to Frontex, the organization assigned to European border security. It is an affront to those who turn to Europe seeking help, seeking hope. If transit camps are overfull, they need to be expanded, not fenced off. Pushing the problem on neighboring nations or into private hands merely sweeps their plight under the rug.

On the Miksaliste website, there is an extensive list of partner organizations. None of them are faith groups. I am not aware of action these groups are taking, if any, but it would be prudent--especially in the face of flaring anti-Islamic and nationalist sentiments across Europe--for faith organizations to become involved with existing aid centers. Particularly on the issue of integration, which has become a buzzword for European politicians across the political spectrum, these groups could provide refugees with local language instruction and lessons on local cultural norms, as many do in the United States.

In addition, faith groups should take on the task of combating religious prejudices against Muslims, which exist even in the most well-meaning European citizens. It is the role of governments and humanitarian aid groups to give support to all without discrimination, but their actions cannot go beyond the basic needs of the refugees. Religious communities have the opportunity, the necessity, to break down the cultural and psychological barriers that still divide the refugees from their host nations.

Maximilian Pitner is a graduate of the University of California, Berkeley, where he studied Rhetoric and German. He currently resides in Wolfsberg, Austria, where he teaches English.