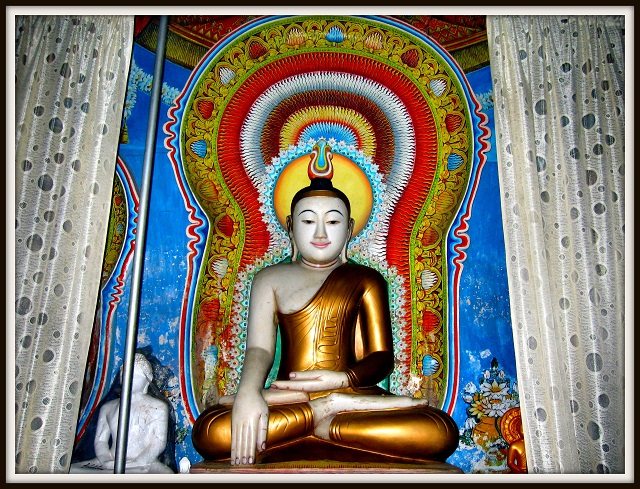 "Of all the modern economic theories, the system of Marxism is founded on moral principles, while capitalism is concerned only with gain and profitability."  --The Dalai Lama

"The human essence is no abstraction inherent in each single individual. In reality it is the ensemble of social relations."--Karl Marx

As a Zen Buddhist in the Soto tradition, I practice a form of seated meditation called shikantaza, which is translated as “just sitting.” Simply put, you sit upright and still, breathe deeply from your abdomen, and allow feelings, thoughts, and emotions to arise then fade away without engaging in thinking-as-usual. This can be a powerful practice, because it engages with the core Buddhist insight into the ever changing and interdependent nature of reality. By experiencing the transiency of our mental processes and how they are contingent on a myriad of factors both inner and outer, we gradually relinquish the view of ourselves as having a “core essence” separate from our experience and capable of controlling events. It is this relentless effort of trying to resist the reality of sickness, old age, and death for ourselves and those we love that leads to suffering. And the relief of human suffering is the “salvivic” aim of Buddhism.

As a lifelong socialist, I am concerned not only with existential suffering, but especially with social suffering. The question I pose to myself is how Zen practice (specifically meditation) can help to reduce the suffering in the world caused by our current social system of corporate and finance capitalism.

Let’s start with “just sitting.” Shikantaza is different from almost everything we do in life in that it is not a “goal-oriented” means-to-an end practice.  It is something we do for its own sake. It is an expression of our intrinsic nature, not a way to make ourselves healthier, happier, more productive or anything like that.  As such, it involves a radical acceptance of ourselves and others as being in some deep way perfect. But, as the great Shunryu Suzuki said, “We could all use a little improvement.”

Our society involves us in a never ending project of going to school to get a job, getting a job to make money to buy lots of stuff, getting a promotion to make more money to buy fancier stuff, and on and on. “Just sitting” may challenge this equation of happiness with work and consumption. I think of Zen practice as taking me off the grid of late capitalist culture in that it can serve as an inoculation against the hegemonic ideology promoting greed, affluence, control, and personal powerlessness. In this way, it is a kind of “radical passivity” that can lead to compassionate social action.

This ostensibly passive practice is a non-acceptance and challenge to the corporate/financial structures that dominate our lives and endanger the planet. “Just sitting” is radical because it opens a psychological space removed from repressive ideologies. My hope is that from Zen practice of this kind can emerge an oppositional consciousness that cuts across lines of color, gender, and class to reveal in a fundamental way what we all have in common: the simple fact that we all work for a paycheck (or want to).

But meditation must be coupled with deep study and critical thinking. In Zen, we chant what is called the Bodhisattva Vows. It begins with, “Sentient beings are numberless, I vow to save them. Delusions are inexhaustible, I vow to put an end to them.” How does one save all people? To my mind it is by working to relieve the social suffering of others through empathy and compassionate functioning in the world in solidarity with my comrades. The Bodhisattva ideal can be a powerful model for a kind of Buddhist Socialism.

Now, “engaged Buddhism,” which contributes to practical efforts at social change is good. One example in this country is the Zen Peacemaker Order founded in 1996 by the late Roshi Bernie Glassman. This group aims at bringing the Buddhist principle of Compassion into providing social services in disadvantaged areas, conflict resolution and environmental stewardship. One of its involvements is holding regular "street retreats," where members live for stretches among homeless people and work in soup kitchens and homeless shelters .But I propose that meditation can foster the development of an alternative “solidaristic” consciousness and radical critique of neoliberal capitalist ideology that clears a mental space for the utopian imagination.

To use the metaphor of the individual as a cell in an organism and the idea of the mind as a social relation, we come to the notion of an ecology of mind. Under our system, the diagnosis of health or disease of the social mind and body politic is determined by the State. Our government decides which cells are diseased and how to treat them. An alternative socio-psychological Buddhist praxis reveals that the optimal flourishing of individuals can only occur in a society free of material want, ecological devastation and race/gender oppression. Zen meditation can clear a space for us to imagine an alternative sensibility and community (sangha) wherein each of us contributes our unique capacities as free and flourishing citizens to all of us in need. Furthermore, shikantaza meditation may function to inoculate us from the capitalist mass media ideology that colonizes our imaginations and unconscious desires.

What would a Buddhist anarcho-socialism look like? With the COVID-19 pandemic, grassroots mutual aid organizations have sprung up around the country, and DSA chapters have participated in them. Citizens (and non-citizens) making masks, delivering groceries to those sheltering in place, providing food for the hungry, covering emergency cash payments, and lobbying for an overhaul of the health care non-system. They are doing this vital work because our government has shamefully abdicated its responsibility during this massive crisis.

With the Movement for Black Lives, thousands of people have been mobilized in the fight for equal justice, and at the demonstrations participants take care of each other with masks, hand sanitizer, water, and food.

I don’t want to go all mystical on you, but at a Black Lives Matter march in my New York neighborhood in early June, which I joined shortly after my daily meditation, I had a revelatory experience of merging with all the crowd, all of us in unity for the cause of social justice and equality. Looking down East End Avenue at energized folks as far as I could see...well, I was not there. I was one with a social body dedicated to a society based on the principle of from each according to their capacities and to each according to their needs.

This month, I hope to receive lay ordination as a Soto Zen Buddhist. With this comes a black rakasu, a bib-like garment worn around the neck symbolizing the Buddha’s robes. When I asked my teacher how I should expect to feel when I wear it, he told me to think of it as a sign saying, “Hi. My name is Henry. How can I help you?

Henry Blanke is a long-time member of DSA and Soto Zen Buddhist. He worked as an academic librarian for almost 30 years and is now embarking on a second career as a substance abuse counselor. Henry lives in NYC and enjoys writing poetry, cooking and jazz.