Standing with Black Women and Girls: A Call for Solidarity 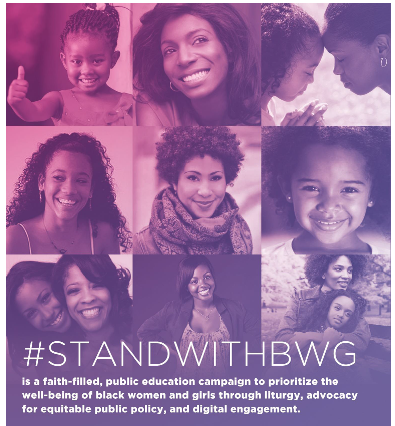 For communities of color and of faith, standing with black women and girls is more than a desirable ideal – it is a moral obligation and sacred opportunity. Last weekend, a national planning team launched a campaign to stand with black women and girls under the organizing hashtag of #StandwithBWG. This networked undertaking of public education is a month-long effort of using liturgy, advocacy for equitable public policy, and digital engagement to prioritize the well-being of women of color. It is an effort designed to support, not supplant, the existing leadership and advocacy of black women and girls on their own behalf.

The call to action is for black congregations of faith to move beyond special occasion advocacy – wherein Women's Day, Mother's Day, or a publicized crisis generate temporary support – to sustained advocacy for black women and girls that situates their health, happiness, and wholeness within the sediment and sinews, the pulpit and pews of our sanctuaries.

As a son of the black church, still recovering from what Bishop Yvette Flunder calls the bruises of patriarchy, I convened this campaign, along with dear friends and comrades Onleilove Alston, Rev. Jennifer Bailey, Rev. Shivonne McKay, Rev. Traci Blackmon, Rev. Freddy Haynes, Rev. Willie Francois, Rev. David Malcolm McGruder, Carmen Dixon, Ifeoma Ike, and Kercena Dozier, for personal and communal reasons. Regarding the former, I remember the look of disgust - but not surprise -- when my wife, fellow minister, and Yale Divinity School candidate Gabby Cudjoe-Wilkes beheld the video of school resource officer Ben Fields throwing a black teenage girl named around the classroom like a rag doll. The anguish and sorrow on Gabby's face is a look I will never forget. With an insistent yet incomplete imagination, I agonized alongside her, buckling beneath the weight of a society that pushes black women and girls out of opportunity, commodifies them via human trafficking in America's transit centers, objectifies them in faith communities, exploits them at home and at work, and stereotypes them in the public square.

This anguish and sorrow, lamentably, is not restricted to our household. Across this nation, indeed throughout the world, black women and girls of the African diaspora are battered by economic forces that disadvantage them in labor markets, cultural narratives that dehumanize them in our communities, and religious ideas that disfigure their brilliance and impose ungodly ceilings on the leadership development.

I do not write as a self-appointed savior or a presumed patriarch seeking to mansplain the path to liberation for black women and girls. Instead, I compose this call to labor for liberation as the son of Dr. Jettie Burnett, a writer, theologian, and black woman activist; as an aggrieved husband; as the friend and brother of black women clergy; as a fed-up citizen weary of listening to visions of equal justice under the law that exclude gender equity; as a contemplative striving to think freedom alongside the womanists and black feminists who have articulated and argued for freedom, for decades, to a largely indifferent and often hostile audiences; as a Kingian socialist who recognizes that my own emancipation is tethered to the emancipation of black women and girls.

There is a landmark anthology of womanist writings that declares that "All the Women Are White, All the Blacks Are Men, but Some of Us Are Brave." To my brothers in ministry, I submit that our blackness is a meaningless social construct, and that we are surely not brave or prophetic if we do not stand alongside black women and girls. We may stand imperfectly, but let our stance be steadfast. We may stand with the scales of sexism yet being removing from our eyes, but let us stand as needed, sit down when needed, and listen closely to our dear sisters at all times.

Imagine what the Southern Christian Leadership Conference would have become had Ella Baker remained Executive Director; consider what the National Baptist Convention could have been had Nannie Helen Burroughs received the full measure of denominational support for her organizing and leadership work.

A month-long campaign will not reverse generational legacies of black men objectifying and oppressing black women in our society and in our sacred spaces. Nevertheless, if we collaborate together, we can join others already at work on these issues, and thereby forge a constellation of sun-kissed sojourners who affirm the aspirations of women in ministry, who fight in the overlapping space of gender equity and racial justice, who dare to lead by coalition, companionship, and collaboration instead of the male-driven hierarchy of leadership that has not and will never free us.

Together, we can stand in solidarity, striding to a faith-filled future of freedom from sexism, freedom to live into an economy that values the worth and work of black women and girls.