Stolen Valor: Modern Heathenry’s Battle to Reclaim its Faith from the Far-Right 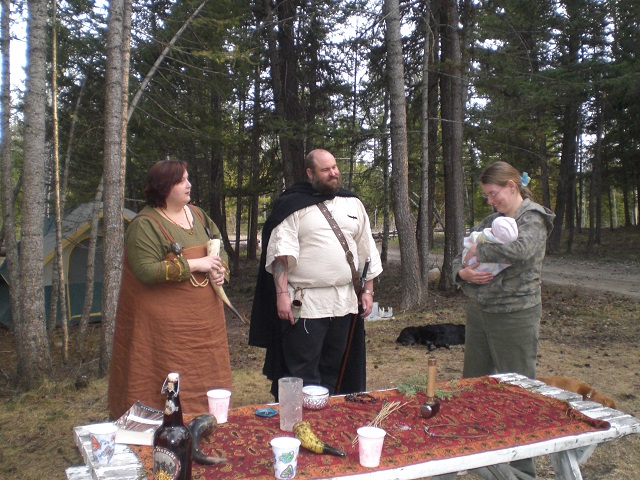 By Rian A. Noah

After years of being a leftist in a right-wing area, I thought I was done being surprised by the antics on the far-Right. And yet I still found myself standing with leftists around the country, open-mouthed with rage and disgust toward the Conservative Political Action Conference’s recent annual gathering in Florida, where ex-President Donald Trump continued to spread lies and sow hate for political gain.

For some leftists, this event brought a special kind of pain. Every speaker stood on a stage that resembled the Odal rune, a symbol that not only represents the Nazi SS and modern White Power movements, but is built on rarely-challenged lies about ancient Germanic religions.

For me and others who share my faith, the misappropriation of symbols and regurgitation of bad history is nothing new. We call ourselves “Heathens,” but “Heathenry” isn’t really a unified movement. It’s a catch-all term describing a group of modern revivalist religions attempting to recreate the ancient faiths of the Germanic people. We’re a diverse bunch: you have your Norse Heathens, your Anglo-Saxon Heathens, and even those who practice Frankish or Gothic Heathenry. We may share a group of similar symbols, mythology, and Gods, but our practices are about as varied as they come.

We also have a “Nazi problem.”

Of course, this started with the Nazis. In an attempt to give a religious, spiritual, and “historical” justification for their movement, they built a false history of the Germanic people and their gods. To this end, they appropriated ancient runic alphabets and sacred symbols, commissioned twisted mockeries of them, and used them as emblems to emblazon on flags and uniforms.

The SS Symbol, for example, was the combination of two Sowilo runes side-by-side (often misconstrued as lightning bolts); the Odal rune and the Black Sun are approximations of Heathen symbols – the Othala rune and the Sun Wheel, respectively. But both are Nazi creations, used exclusively in the context of White Nationalism. Even if these symbols have nothing to do with Heathenry or our Gods, the damage was done, creating a foundation for misunderstandings about us and our religion that persist to this day.

When Heathenry revived in the 1970s, the problem of far-right appropriation didn’t go away; in fact, you could argue that it only got worse. Else Christensen’s Odinic Rite and Stephen McNallen’s Asatru Free Assembly (now the Asatru Folk Assembly) embraced the “Mythic North,” using it as a justification to create a sort of “Ethnic Religion” for white people.

Meanwhile, other Heathen groups sought an inclusive and anti-racist approach to our religion. They wanted everyone to be able to worship the Gods, not just those who had “pure white ancestry” or believed in conspiracy theories like Meta-Genetics.

The racists were called Neo-Volkisch (also called “Folkish”), while the rest of us were called “Universalist” at first, but are now known as “Inclusive” Heathens.

Unfortunately, to the mainstream press and the average person, there is no distinction between the two. After a photo surfaced of valknut-tattooed, non-Heathen and well-known QAnon supporter Jake Angeli at the January 6 capitol riot, Rolling Stone ran an article that defined “Heathen” as another word for “White Supremacist Pagan.” Inclusive Heathens stood together, and eventually convinced the editors to make the change later that day.

When you’re a young, decentralized religion, fighting misinformation is an uphill battle. Just ask some of the small, older offshoots of mainstream religions. Still, we’ve been doing what we can to fix this.

In 2016, some 120 Heathen groups in 80 countries signed on to Declaration 127 in direct opposition to the Asatru Folk Assembly. There have been talks about rewriting the Declaration due to the sheer volume of Folkish groups out there, and a broader effort is the “Declaration of Deeds," which seeks to be a more straightforward condemnation of the ideas and deeds behind Folkism.

Inclusive Heathen organizations, such as The Troth and Forn Sidr of America, have taken public stances against Folkism, and groups such as Heathens against Hate have been formed, which want not only to stop racists from appropriating our faith but also to act as anti-fascist organizations in their own right.

On the smaller scale, many Inclusive Heathen communities are relentless in trying to cut Folkists from their ranks, and there are websites like The Longship and Wind in the Worldtree that work to educate new and current Heathens in ways that keep them from accidentally stumbling onto information laced with neo-Nazi dog whistles or racist buzzwords.

But it isn’t enough.

So long as the public knows little to nothing about us, and so long as we are dismissed and ignored by the wider community, our efforts will be overshadowed by the very loud contingent of racists that try to be the central voice in our religious faith.

Heathenry is not a traditional religion. We are often hiding in plain sight, wearing our symbols under our clothes or tattooed on our bodies. Some of us worship alone, some worship in local groups, and some exclusively congregate online. We are all called to and serve the Gods in our own way, and no two of us are alike.

You probably know a few of us. We might even be in local DSA chapters or socialist groups.

If one of us comes forward, and we open up to you about ourselves and these issues, please keep your light on for us. Open the door, let us in from the cold, and let us tell you our stories.

If you hear someone argue that Heathenry is inherently Folkish or try to defend the ahistorical narratives created by the Nazis, stand with us.

If you see us speaking out against far-right groups appropriating our faith, symbols, and histories, stand with us.

If you see things like the stage at CPAC, which flagrantly used SS iconography that was created as an attempt to not only appropriate our myths and Gods, but to give themselves a twisted sort of legitimacy, stand with us.

By taking back the mythologies that White Power advocates use to hold up the shoddy theatricality of fascism, we defang what is too often a very effective propaganda tool.

Yes, there will always be far-right ideologues who will use an appeal to tradition as justification for their bigotry. The Klu Klux Klan is proof enough of that.

However, if we reclaim the stories that they have stolen from us, and we weed the truth from their lies, bigoted legends, and conspiracy theories, they will retreat back into the darkness.

As the Havamal states:

“When you see misdeeds, speak out against them; and give your enemies no peace.”

Will you fight alongside us?

Rian Noah is a Norse Heathen, DSA member, and a graduate of the University of Texas at Dallas.