The Ecological Crisis, the Bible, and the Green New Deal 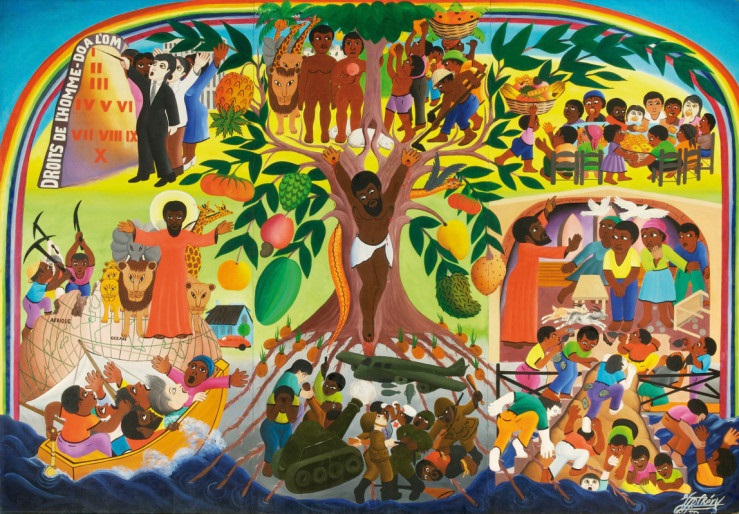 By Brigitte Kahl and Jan Rehmann

In conjunction with the UN Climate Action Summit and global climate protests, RS presents a mini-series of posts presenting religious socialist perspectives on climate justice. This is the second of two posts in the series.

We live in a time of crisis, staggering between despair and hope. The ecological disaster is no longer a far-away menace, but already present in rising sea levels, desertification, devastating flooding, and wildfires, accompanied by unprecedented suffering and desperate mass migration. To many, the apocalyptic catastrophe has already happened, is happening right now, or appears inescapable. Not surprisingly, apocalyptic imagery, often drawn from the biblical Book of Revelation, has become omnipresent in popular culture, offering a mind-numbing mix of horror-movie, super-hero, and “palliative” emotional opiates. It seems easier to imagine the end of the world than a fundamental change of our way of life. On the other hand, we experience a growing international movement against ecological destruction, in particular among young people, who participate every week in the global school strikes of “Fridays for Future.” In the United States, it is primarily the Green New Deal, first proposed by Representative Alexandria Ocasio-Cortez (D-NY)and Senator Ed Markey (D-MA) and later fleshed out in Senator Bernie Sanders’s (I-VT) $16.3 trillion campaign proposal that galvanizes and expresses the aspirations of many eco-justice and social justice movements.

The ecological crisis and the uttermost urgency of stopping the current ecocide challenge religious and secular communities alike. The struggle for a livable life on earth requires the synergy of all intellectual, ethical, and spiritual resources. The following seven “theo-political” theses try to combine what is usually separated—an eco-theological reflection and a political analysis.

1. A Christian declaration of guilt. In light of the ecological crisis, occidental Christianity in its predominant representations must make a new Declaration of Guilt. Ever since its unholy alliances with ancient Roman imperialism and later Western colonialism and capitalism, it has been complicit in global systems of conquest and exploitation that destroy both human life and earth, air, and water. Much of this ruthless eco-imperialism quotes Genesis 1:28 as divine authorization to “rule and subdue” the earth. As “crown of creation,” humans are allegedly entitled to be masters over nature without any accountability. This anthropocentric theo-logic of domination pits “God in heaven above” against the “below” of nature. It poses spirit and mind against matter and body, making all who partake in its perceived inferiority an object of rule. These hierarchical binaries, mostly derived from Platonic philosophy and deeply rooted in our culture and ideology, are an ecocidal toxin with millennia of long-term effects. They cannot be removed through a simple act of acknowledgment but need, theologically speaking, meta-noia (repentance) as a comprehensive “turning around of our minds” toward an earth-centered faith, reasoning, and life.

2. Embracing the radicality of climate science. One symptom of the current multilayered crisis (ecological, social, political, ethical) is the glaring discrepancy between science and politics. For a long time, neoliberal capitalism has been able to use scientific research profitably for its own purposes, and it continues to do so in many respects. But the findings of climate science have been purposively ignored for many years. Out of the nine “planetary boundaries,” four have already been crossed (climate change, biodiversity loss, land-system change, nitrogen cycle). Nonetheless, the corporate and political elites have not done anything that actually worked to stop the environmental destruction. We include here the cap-and-trade systems decided by the UN conventions from Kyoto to Paris that followed the logic of market incentives and were ineffective.

Under these circumstances, scientists sound like radicals. There are good reasons why Fridays for Future rally behind the demand “to listen to the scientists.” And if the Green New Deal’s goal of decarbonizing energy and transportation by 2030 and full decarbonization by 2050 seems “radical,” it is because it  respects the scientific findings and conclusions of the Intergovernmental Panel on Climate Change and not the supposed logic of the market. A theology not bound to the powers-that-be must break away from any obscurantism and align itself with prophetic truth-telling. This might also help us resist the mainstream media games of “tactical framing, by which every issue is squeezed through the pasta machine of political maneuvering, thus preventing us from perceiving and analyzing the real life-and-death questions we face. In the age of fake news, we need to rigorously re-connect our religious, ethical, and political commitment to the scientific knowledge available.

3. Confronting a voracious Moloch. The ecological crisis is of such magnitude that it cannot be addressed by individual consumer choices alone. Many of us try to reduce household waste by recycling and avoiding the usage of plastic bags, bottles, cups, or straws. This is important in terms of changing our own attitudes and habitudes. But unfortunately, the actual impact of these changes is limited. Individual household waste in the United States is scandalously high, but it amounts to only about 2.5 % of the total waste generated, the bulk of which is industrial waste. Although we need a mass conversion from consumerism to a sustainable way of life, we also need an economic conversion on the macro level. German philosopher Ernst Bloch envisioned a “technology of alliance” that no longer stands in nature like an “occupation army in enemy territory,” but aligns itself with the co-productivity of nature.

Yet, as soon as we demand a sustainable conversion of the economy, we touch upon power structures ferociously resistant to change, draped in a quasi-religious garb of immutability. Karl Marx famously characterized this system as “Accumulate, accumulate, this is Moses and the prophets.” And Walter Benjamin described capitalism as a “cultic religion” that functions as a pitiless mechanism devouring human existence. Again, theology as liberating, prophetic force is called to task: it has to address the “structural sins” of an idolatrous system, our institutionalized dance around the “golden calf” and its death-dealing ideological values. We need to break the still prevalent taboos regarding an eco-socialist mode of organizing society. Considering our energy and transportation systems as a public good would be an important first step.

4. Green jobs and a federal job guarantee. The Ecumenical movement of the Christian churches has long argued for the inseparability of social justice, peace, and the integrity of creation. In a similar vein, the comprehensive approach of the Green New Deal includes the creation of millions of green and unionized jobs. There is a widespread anxiety among workers that their jobs are being taken away by automation and international competition. And they are not wrong to fear this. Donald Trump exploited the fear in racist and xenophobic terms, and it was one of the reasons why he was elected. The climate-change deniers and distractors denounce environmental regulation as an elitist project that harms the economy and working people. We must counteract this dangerous divide-and-rule strategy by developing a concrete ecological plan of conversion that not only preserves jobs but gives access to better paid and sustainable jobs.

It is therefore crucial that the Green New Deal focus on a just transition for coal miners and oil-rig operators (guaranteeing five years of a worker’s current salary, as well as relocation or job training) and aim at a federal job guarantee. Our economic system creates a large “reserve army of labor,” unemployed or underemployed, by which it holds workers’ demands in check and wards off unions. A federal job guarantee would be a tangible alternative to this downward spiral and create a national wage floor. A fundamental ecological transformation needs a huge workforce on all levels.

5. Preferential option and intersectionality. Liberation theologians committed to the “preferential option for the poor” had to learn the lesson that the “poor” are not a homogenous group but rather an intersectional composite of heterogeneous components, often pitted against each other by gender, race, and other binaries. Different forms of oppression such as classism, racism, sexism, and homophobia interact on multiple and interrelated levels. Intersectionality means that social movements must transcend the silos of singular identities and learn to connect different issues. The Green New Deal tries to do this on a practical level. It points out that climate change affects first and worst indigenous peoples, black and brown communities, migrants, the poor, the unhoused. Applying liberation theology to today’s agenda means that we build broad intersectional alliances that connect the preferential option for an endangered earth with class issues; antiracism; the gender earning gap; and, not least, the concerns and experiences of indigenous people, whose sovereignty and land rights must be respected and protected.

6. Overcoming apocalyptic fatalism and “heavenism”. The Bible at present is the storm-center of a fierce battle for scriptural re-interpretation and theo-ethical reorientation. Large sectors of the religious Right, for example, have appropriated an apocalyptic fatalism that declares the end of the world as God-willed, imminent, and inevitable, so that human efforts to reorient the course of history are pointless or even an expression of godlessness. This widespread apocalypticism has merged with the dualism that sees the essence of faith “up there” rather than “down here,” otherworldly rather than earthly, spiritual rather than material. Yet this “heavenism” is not what the Bible proclaims. Genesis 1:28, for example, needs to be read in the context of Genesis 2, where the human being (Adam) is made from and called after the “dust of the earth” (Adama), tasked with “serving and preserving” it. Earth is not the inferior and doomed “below” that we can run down with impunity, expecting a last-minute airlift as divine exit-strategy for the pious (only). Even the Book of Revelation doesn’t offer such a heavenly “rapture,” nor does it present a timed doomsday scenario as license for inactivity. Rather, it laments the suffering of the earth and her creatures, crying out for a change of direction and turning away from imperial hubris. There is no end-time ascension or ultimate earth-abandonment. Rather, in Revelation 21, a new earth alongside a new heaven “come down” in a final act of divine transformation. An earth-friendly ecological re-reading of Scripture is more needed than ever.

7. An opening to be entered. The “good news” announced by Jesus is certainly not the assurance that everything will be fine, but rather the testimony to crisis as the kairos for radical change: even in the midst of despair there might be a transformative presence of “redemption.” For Walter Benjamin, the time of the Now is shot through with fragments of messianic time. In secular language, this can be understood as a call to be attentive to any opening that contains a possible turning point for the better.

If not watered down, the Green New Deal might provide such an opportunity. It has already changed the public debate. During the last presidential elections, Bernie Sanders was still a lone voice in describing the ecological crisis as humanity’s most dangerous threat. This awareness has now moved to the center of public debates and become the focal point of a new hegemony from below. The upcoming primaries and presidential elections may intensify this dynamic, if they are accompanied and pushed by a sustained mass movement. This is our chance. There is never a guarantee of success. There is no reason for a facile optimism. But we are we are obliged to seize this opening, whatever faith or belief we subscribe to.

Brigitte Kahl is Professor of New Testament at Union Theological Seminary in New York and a native of East Germany. Her work has been groundbreaking in Pauline studies. She is the author, among other works, of Galatians Re-Imagined: Reading with the Eyes of the Vanquished (Fortress Press, 2010).

Jan Rehmann is Visiting Professor for Critical Theory and Social Analysis as well as Director of the PhD Program at Union Theological Seminary in New York, a lecturer at the Free University in Berlin and author, among other works, of Theories of Ideology: The Powers of Alienation and Subjection (Haymarket Books, 2014).