The Invention of “Catholic Radicalism” and “Pious Apostasy”: Dorothy Day and Michael Harrington 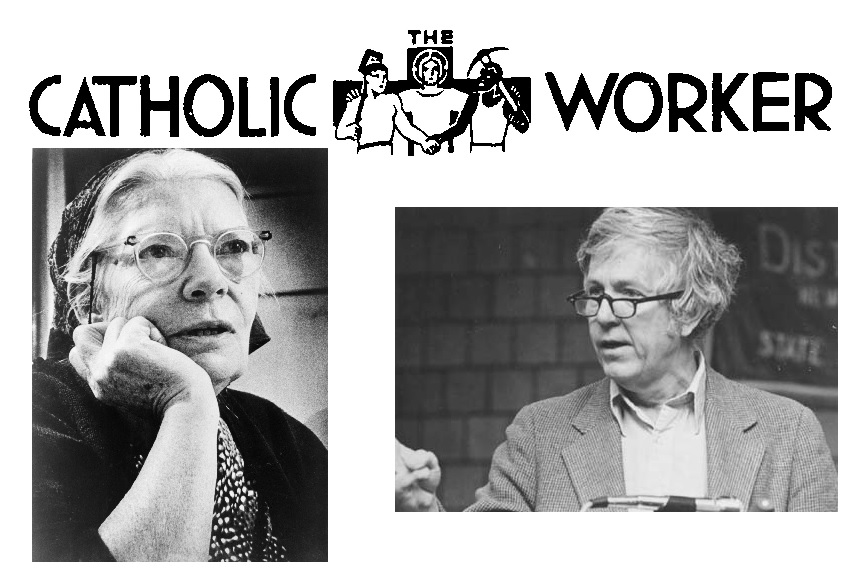 “All I knew of the Catholic Worker when I walked into the House of Hospitality,” DSA founder Michael Harrington wrote in his 1973 memoir Fragments of the Century, “was that it was as far Left as you could go within the Church.”

The Catholic Worker’s House of Hospitality was located on Chrystie Street on Manhattan’s Lower East Side, a place where the poor and homeless could find a free meal; a bed; some cast-off clothing; and, ideally, a sense of Christian fellowship. The Catholic Worker movement had been in existence for nearly two decades when Mike made his way to Chrystie Street in 1951. The movement was known for its adherents’ embrace of voluntary poverty as they lived among and served the poor, and also for its monthly newspaper, the Catholic Worker, founded in 1933 and still published today (and still costing the penny a copy it did when founded).

The Catholic Worker’s founder and guiding spirit, in residence at Chrystie House when Mike arrived, was Dorothy Day, a former socialist who underwent a religious conversion in the late 1920s, and who for the remainder of her life combined ardent Catholicism with an equally ardent blend of anarchism and pacifism.

Day died in 1980, age 83; Mike, three decades younger, died in 1989. If Mike had lived to see out 2015 as the hale and hearty 87 year old he deserved to be, he certainly would have been delighted to hear Pope Francis declare before a joint session of Congress on September 24 that a nation is great when “it strives for justice and the cause of the oppressed, as Dorothy Day did by her tireless work.” The conservative Republicans who dominate both houses may have been less than delighted by the pope’s sentiments, although they applauded politely; their id, Rush Limbaugh, feeling less constrained, sputtered in his radio commentary that “they want to canonize this babe…  and she’s noted for her anti-capitalist statements, ripping apart the capitalist structure of the United States.”

Day, born in Brooklyn in on November 8, 1897, had a peripatetic childhood, as her sportswriter father moved from job to job and city to city. As an undergraduate at the University of Illinois, she joined the Socialist Party, then at the height of its influence under Eugene Debs. Returning to New York City in 1916, she found a job as a reporter for the Call, a daily socialist newspaper, and later worked for the famous radical monthly The Masses (suppressed by the federal government during World War I). She immersed herself in the bohemian subculture of Greenwich Village; Eugene O’Neill read poetry to her in village dives. Her circle of friends included leading socialists, communists, and anarchists (in 1917 she even met Leon Trotsky, then an obscure exile, shortly before he returned to Russia, fame, and ultimate doom).

In the 1920s, a series of unhappy love affairs, an abortion, and a failed marriage left her feeling spiritually adrift, until her conversion to Catholicism. She remained a committed opponent of capitalism (one of the appeals of Catholicism for her was that it was the church of the urban poor). In the depths of the Great Depression, in collaboration with Peter Maurin, a French immigrant and itinerant soap-boxer who preached a mixture of religious piety and radical doctrine, Day founded the Catholic Worker. By the mid-1930s their newspaper had a circulation of 150,000, and the House of Hospitality in lower Manhattan (then located on Mott Street) was feeding over a thousand unemployed people daily.

Of equal importance, Day and Maurin (until his death in 1947) trained a generation of dedicated and talented young Catholic activists and intellectuals who would go on to play significant roles within the Church, the labor movement, and various social reform movements. There were any number of individual radical Catholics who preceded Dorothy Day, but Catholic radicalism in the United States was largely her invention.

Mike Harrington joined the Catholic Worker in 1951, and by the end of 1952 had departed both the movement and the Church to join the Young People’s Socialist League, youth affiliate of the by-then tiny and beleaguered Socialist Party. But in the short time that Mike belonged to the movement, Dorothy Day had a profound influence on him, in effect giving this dutiful son of a prosperous and pious Midwestern family permission to follow his instincts leftward, as well as his first prolonged exposure to the plight of the poor.

When Mike arrived at Chrystie Street, Day was in the midst of writing her autobiography The Long Loneliness (still the best book to understand the origins of the Catholic Worker movement, along with historian Mel Piehl’s 1982 Breaking Bread: The Catholic Worker and the Origins of Catholic Radicalism in America). Day began her autobiography with a chapter called “Confession,” writing of her own political involvements before joining the Church:  “I do not know how sincere I was in my love of the poor and my desire to serve them.” Mixed in with and corrupting her idealism and altruism, she believed, was the desire “to make my mark upon the world.” She chastised herself for being ambitious and “self-seeking.”

In the prologue to Fragments of the Century, the first of two volumes of memoirs, Mike, in contrast, declared he was not interested in writing a “confession.” And his story of gaining self-knowledge involved leaving, not joining, the Church. He called this an act of “pious apostasy.” Still, a careful reading of his memoirs reveals Day’s continuing influence. He, too, would worry about the conflict between loving humankind in the abstract, and having ambivalent feelings toward the living, imperfect human beings he encountered in daily life. The title of the second volume of his memoirs, The Long Distance Runner (another figure famed in contemporary literature for its association with loneliness), recalled, either by accident or intention, that of Day’s autobiography.

It’s none of my business who the Catholic Church decides to canonize as saints, but (pace Rush Limbaugh), the anti-capitalist “babe” Dorothy Day seems to this outsider a good candidate. And, if pious apostates can be in the running, maybe someday she could be joined by Mike Harrington. (I don’t know how Mike would feel about that, but his mother would have been pleased.)

Maurice Isserman is the author of The Other American:  The Life of Michael Harrington, from which this piece is adapted.