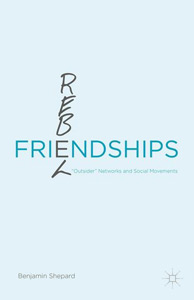 In an age when we can be “in touch” without leaving the house and have an ever-expanding network of virtual “friends,” why should we maintain any kind of public space, church, community center, or political organization? Because, says Benjamin Shepard in Rebel Friendships, it is only through authentic friendship that social movements can survive and succeed.

Shepard excavates his own experiences and those of other activists to present a vibrant picture of how deeply friendships have influenced social change, long before and far beyond at-your-fingertip electronic connection. His case studies of movements that both sustain themselves through the power of affinity and move beyond institutional structures prove that, even at its messiest, lively and live interaction among loved ones can nurture and propel causes. This big-hearted book is a galvanizing reminder that the search for and maintenance of human connections lie at the center of any fight for change. Through well-researched historical analysis and engaging personal anecdotes, Shepard reimagines community organizing by reminding us who we have been, who we are, and who we can become, showing that the word “friend” deserves a lot more credit than we currently give it. [Full disclosure: Shepard is a member of my own real-time church community, and I was happy to provide a “blurb” for the book.]

Shepard’s work is gutsy, arriving at a time when the power of online social networks to enable collective action is being widely celebrated. The Occupy Wall Street and Black Lives Matter movements, in particular, have revealed just how deftly online social networks can be harnessed to promote, sustain, energize, and re-energize political movements. Shepard doesn’t deny the strong contribution of hashtags and newsfeeds, but his main interest lies in something far simpler. At their root, Shepard argues, all successful movements are based in very real, authentic, messy, offline love coursing between humans in real time (a “Society of Friends” in Quaker language, one historical group that serves as a model for Shepard), or what the ancient Greeks called philia.

Distinct from the other forms of love that the Greeks celebrated, most notably eros--the passionate love between sexual partners--and agape--the love of humans for God and God for humans--philia is the love that develops among those who fight alongside each other, building trust and loyalty through sacrifice and service to one another and to common causes. Whereas eros might induce passion for a lover that might lead to a lack of control and agape serves as a call for humans to attempt to love everyone (think “The Golden Rule”), philia calls for both an erotic sort of connection and an attempt to walk in another’s shoes as well as a desire to like one another. Philia enables us to see each other through good and bad times, to view the creation and maintaining of the human connection as perhaps even more important than the furthering of a common cause.

Common interests, for Shepard, are the roots that nurture the blossoming of rebel friendships. He outlines specific examples of groups such as the highly effective ACT UP (AIDS Coalition to Unleash Power) and the direct-action environmental group Time's Up! that have inspired masses, particularly masses that feel “outside” dominant societal structures. But he is interested in something more nuanced than the simple argument that people connect with those who hold the same opinions. Instead, his case studies show how the give-and-take of for-better-or-worse love and the untidiness inherent to such relationships make room for more active living, more honest justice-making, and more creative cultures.

In the case of Time's Up!, “a New York City environmental group that promotes nonpolluting transportation as a model of sustainable urbanism,” and one that has regularly joined forces with other groups such as ACT UP, Occupy Wall Street, the Radical Homosexual Agenda, and other groups, Shepard, using the work of William Rawlins, pinpoints the fragile ethical principles required for the “practice of political friendship,” including voluntary negotiation; care for one another's well-being; equality; an interest in ongoing learning about one another; trust-building; and honest, frank talk. Shepard acknowledges that these principles were followed in some of the affinity groups within Time's Up!, but were rejected by others, and admits that, when care was not taken by all, the feeling of friendship sometimes gave way to the group’s feeling simply like a nonprofit. When the bonds of honest friendship faltered, membership and good work waned. When friendships and play flourished, membership soared and good works thrived.

Too often, humans hope for our interactions to be clean and clear. We want to know if someone agrees with us or whether a conversation is worth the time and energy. We hope to move on immediately if we can’t convince someone of our point of view. We seek quick eros on Tinder and speak of agape in trite aphorisms that can be easily shared in less-than-140-character tidbits. But philia urges us to something else. It charges us to rethink our own structures (even as we fight the larger structures) by breaking them down to what they should be serving: the interdependence and storytelling that happens when humans don’t just love one another, but actually like one another. And liking one another doesn't mean that we don't ask questions and challenge our friends. Tribes that don't question their own motives and actions become tools of new empires. Groups of friends are always in danger of growing cliqueish and promoting cronyism.

At their best, social movements do more than create spaces where groupthink goes unquestioned. Today's means of organizing can sometimes lead us into narcissistic traps, but active reflection and honest criticism among friends can sustain relationships, even beyond the collapse of a movement. If a search for meaning and a fear of disconnect prompt us to join groups, it is not an attachment to definitive answers that keeps us afloat. Rather, it is the discovery and cultivation of connections with others who want to ask similar (and dissimilar) questions. Committing to question-fueled friendship in an age when we can “un-friend” at the click of a mouse, might just be the most rebellious thing we can do.

Micah Bucey serves as the Associate Minister at Judson Memorial Church in New York City, where he facilitates the always-different, always-free, always-queer Judson Arts. Wednesdays happenings, among other creative ministries.