Three Reasons Why Religious Socialists Support Medicare for All 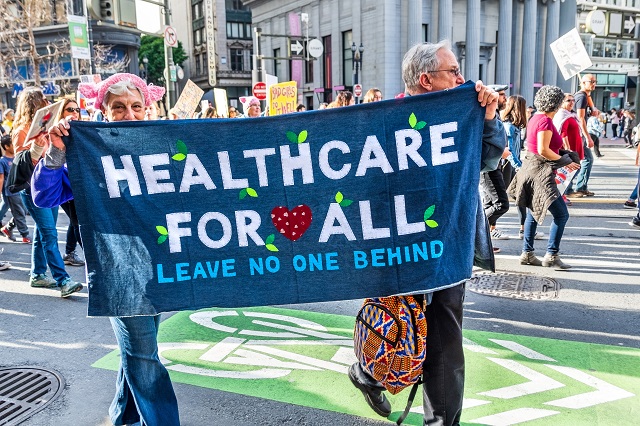 On March 17th, U.S. Congresswomen Pramila Jayapal and Debbie Dingell introduced the Medicare for All Act of 2021, which would guarantee comprehensive healthcare to everyone in the U.S. The legislation to remedy one of the U.S.’s most egregious injustices was introduced on the one-year anniversary of Covid-19 being confirmed in all 50 states and the District of Columbia.

“While this devastating pandemic is shining a bright light on our broken, for-profit health care system, we were already leaving nearly half of all adults under the age of 65 uninsured or underinsured before COVID-19 hit. And we were cruelly doing so while paying more per capita for health care than any other country in the world,” said Congresswoman Jayapal.

“There is a solution to this health crisis — a popular one that guarantees health care to every person as a human right and finally puts people over profits and care over corporations,” Jayapal said. “That solution is Medicare for All — everyone in, nobody out.”

The Religion and Socialism Working Group of the DSA is squarely behind this effort, and has been for many years. Here are three reasons why:

Every major faith and moral tradition embraces an obligation to ensure that our sisters and brothers get the treatment and medicines that they need. It is an obligation that can be traced back to the mandates of our sacred scriptures, from the Qur’an to the Torah to the New Testament.

There are dozens of New Testament references to Jesus performing acts of healing, so many that he was often referred to in the early church as “The Great Physician.” Jewish scripture includes health care mandates throughout, including in Proverbs 31:9, Isaiah 1:17 and Deuteronomy 15:11 (“You shall open wide your hand to your brother, to the needy, and to the poor.”) History’s first structured charity hospitals were built by Islamic communities, fulfilling that faith’s zakat pillar’s unequivocal command to care for the needs of the poor. The Buddhist, Taoist, and Confucian traditions are replete with similar health care examples dating back as far as 400 B.C.

In recent years and in multiple writings and interviews, clergy and other leaders from the Muslim (“We were always taught that  the foundation of Islam is an obligation to ensure that everyone’s basic needs are met”) Jewish (“Jewish law is clear that healthcare is a communal obligation”), Christian,  (“We see this as a Biblical mandate that people should have access to coverage and to care”) and other traditions have reaffirmed this position. That includes representatives from the Black Baptist, Muslim, Jewish and Episcopalian traditions speaking at our DSA-sponsored recent multi-faith forum on Medicare for All, a discussion we intend to renew at our upcoming national conference on April 24th.

2. Our denominations have embraced Medicare for All as the remedy for our current healthcare crisis.

The Religion and Socialism Working Group has created this survey of major U.S. faith groups, setting out which have explicitly endorsed a single-payer, Medicare for All system for the U.S., and which have made a less specific call for universal healthcare.

Check to see where your tradition comes out: you will likely be surprised by how unequivocally the call for Medicare for All is delivered. For example, among those who have explicitly endorsed Medicare for All/single-payer healthcare are the United Methodist Church, Presbyterian Church (U.S.A.), the Union for Reform Judaism, the Episcopal Church, and the United Church of Christ. The Catholic Church, the Evangelical Lutheran Church in America, the African Methodist Episcopal Church, the Rabbinical Assembly and multiple Islamic organizations have committed to supporting universal healthcare.

That consensus has led to very impactful interfaith healthcare advocacy. In response to the 2017 efforts to repeal the Affordable Care Act, faith groups raised their collective voice, and to great effect. Dozens of denominations and organizations from a wide range of faith traditions issued joint statements, mobilized their congregations, and conducted a dramatic Capitol Hill vigil. As a March 2017 letter signed by leaders of 40 faith organizations said, “The scriptures of the Abrahamic traditions of Christians, Jews, and Muslims, as well as the sacred teachings of other faiths, understand that addressing the general welfare of the nation includes giving particular attention to people experiencing poverty or sickness.”

3. Socializing 18% of the U.S. economy is a big step toward the compassionate, just society that our respective scriptures call for.

Of course, access to healthcare is not the only crisis created by our capitalist system. People need and deserve a livable income, safe housing, and for their basic other needs to be met. Medicare for All does not solve all of those problems. But it would socialize nearly 18% of the U.S. economy, removing for-profit corporations from any role as gatekeepers blocking access to a human right. That would be an giant step forward on the path toward the better nation and better world we know that socialism will bring. That is why DSA is a vigorous advocate for Medicare for All, and why we are proud to lend our religion-based voices to the cause.