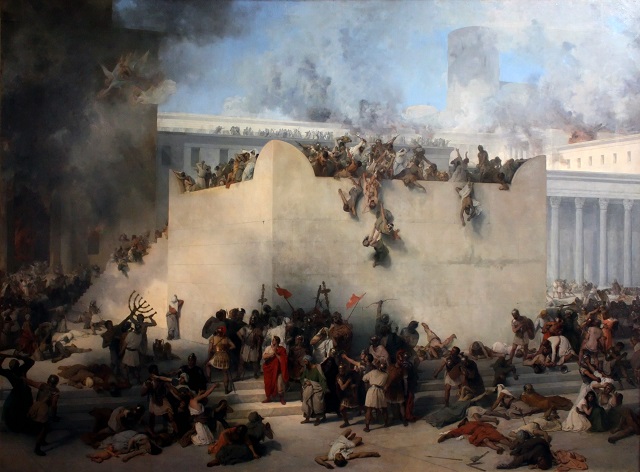 Recently, we observed Tisha b’Av, a period of mourning in the Jewish calendar designed to commemorate the destruction of the Second Temple in Jerusalem in 70 C.E. The Second Temple once provided the beating heart of Jewish ritual, peoplehood, and prayer. When Roman legions set it ablaze, many Jews thus felt that Judaism too had burned with it, relegated to the ashes of forgotten history. The solemnity of Tisha b’Av can be expressed through fasting, sitting on the floor during services, and generally abstaining from extraneous pleasures.

The date also has significant historical impact: following the Temple’s destruction, the vast majority of Jews assimilated into Hellenism, declaring Judaism to be irrelevant, impractical, and even dangerous. Those of the priestly class, whose hierarchy in society depended on the existence of the Temple, fell into a period of grief from which they would never return. Refusing to eat, drink, or continue having children, they set out to rebuild the Temple—desperate efforts that would ultimately be crushed at the Bar Kokhba revolt (132-136 C.E.). A small minority of Jews, however, took a third way by accepting that Temple-centered Jewish life was over, and set out to build something new. The leader of this movement was Rabbi Yohanan ben Zakkai. Intuiting the mounting tensions, Rabbi Yohanan begged one Roman emperor: “Give me Yavneh and its sages.” In the town of Yavneh, Rabbi Yohanan, alongside a dedicated collective of sages, established the framework for what would become diaspora Judaism. Together, they would establish rabbinic Judaism and the modern synagogue, and declare that “every Jew could take up the charge of holiness; every table and home would be the table of the Lord.” Judaism could evidently flourish from the ashes of the old.

For years, rabbis of the Talmud argued over how the Temple could have been destroyed, desperately trying to identify a flaw or failure in communal observance. Rabbi, Abbahu, for example, argued that Jerusalem was destroyed because the people too often violated the laws of the Sabbath. The rabbinic story that seems to have most stood the test of time, however, attributes the Temple’s destruction not to ritual malpractice but rather to sinat chinam (baseless hatred). The story involves a dinner party hosted by a man named Kamtza. In assembling the invitations, a secretarial error led to the invitation of bar Kamtza. When bar Kamtza arrived at the dinner party, Kamtza immediately ordered him to leave, but bar Kamtza begged to stay. He even offered to pay for half the dinner’s expenses, so long as he could be saved from the embarrassment of being asked to leave in front of teachers and colleagues. Kamtza did not waver, and banished bar  Kamtza, and all those at the dinner party simply watched without uttering a word of protest. Rabbi Yohanan ultimately drew on the theme of baseless hatred in this story to characterize the nature of a society that would eventually lose its holiest center. Rabbi Yohanan’s theory marks a decisive theological shift: rather than lament how God could let this happen, Rabbi Yohanan asked instead: how could we let this happen? “Instead of uniting to oppose the Romans,” Rabbi Yitz Greenberg writes, “they [the sages] spent much time and energy assaulting one another.” All those on the socialist Left can understand just how destructive internecine conflicts can become. Although considerable and constraining forces exist to disempower the socialist movement today, surely we too have been guilty of showing more sinat chinam to one another than to real enemies in the ruling class.

On Tisha b’Av, we read from the book of Lamentations, a devastating account of the horrors that befell Jerusalem, such as famine, murder, and assault, all painfully narrated through the first person. The word in Hebrew used to refer to the book of Lamentations, eicha, interestingly, translates to “how” rather than “lament.” We first see eicha used this way in the Torah portion read on the Shabbat immediately preceding Tisha b’Av, parsha devarim, from the book of Deuteronomy. In the 12th line, Moses speaks before the Hebrew people as they finally begin to enter the Promised Land. He explains how excruciatingly challenging it has been to lead the people through rampant chaos and uncertainty, calling out to God—eicha esa levadi— how can I do this alone? God does not answer, but the answer might be hidden elsewhere, in the final lines of Lamentations: Restore us to You, O Lord, that we may be restored! Renew our days as of old.” In other words, Moses asks a rhetorical question— how can I do this alone — and on the final line of our Tisha b’Av scripture, we seem to get an answer —  Moses was never alone.

Amid a global pandemic and skyrocketing levels of inequality, we might do well to respond to challenge not with the stubborn denial evidenced by the priests, or with the resigned assimilation evidenced by the vast majority of Jews, but to follow the example of Rabbi Yohanan. We too can be sober about the difficulties before us while remaining steadfast to our core commitments. In our case, this core commitment would be to achieving socialism in our time. Perhaps, as we assess the barriers to accomplishing this goal, we can remember the prevailing wisdom of the Talmud: cruelty to fellow comrades does not advance us in the long road to freedom. In fact, our greatest blessing, our greatest asset, is the unspoken answer to Moses’ question in the final lines of Eicha: that in times of struggle, we can never act alone.

Lili Mandl is a teacher and DSA-LA member.

Image: The Destruction of the Temple of Jerusalem. Francesco Hayez, public domain