We do not need another Clinton administration. If only Sanders would say it...Mike Harrington would have! 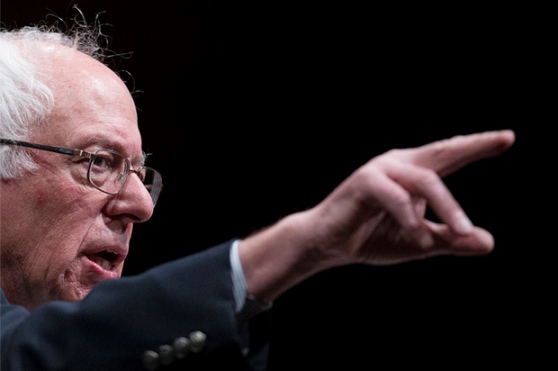 Mike Harrington, a founder of DSA, was once the most famous socialist in the United States. He never ran for president, but if he had, he wouldn't have hesitated to say what today's most famous U.S. socialist still won't say.In the essay below, written in late January in Salon.com and reprinted by permission of the author, Religious Socialism contributing editor Gary Dorrien remembers Mike's oratory and urges Bernie Sanders to be more specific about the Clinton political legacy--Eds.

This article was originally published on salon.com.

We do not need another Clinton administration. If only Sanders would say it...Mike Harrington would have!

Hillary's cynical Medicare assault reminds us how the Clintons play ball, and why Dems must demand something better

Bernie Sanders has already done more to advance Social Democratic values and policies than anyone in U.S. American history, and for that I treasure him. He has a gut-level passion about inequality, poverty and injustice. He fights for equality with a tenacity surpassing any elected official since the New Deal. He is rightly outraged that the tax system is skewed to make equality worse, that the megabanks have become too-big-to-fail hedge funds trading on their own accounts, and that Republican leaders are bent on destroying Medicare and Social Security.

Sanders is the most morally serious candidate in the presidential race by virtue of pressing so strongly on these issues. There may be a majority out there that will vote for him, or at least consider it. He has already surged far beyond his political base—professional-class white progressives with backgrounds in movement politics, like me. He is reaching young voters and blue-collar whites, and is beginning to reach independents. But Sanders cannot win the nomination without breaking through to black and Latino voters who voted for Obama, and I think he is overgeneralizing his commendable determination to run a positive campaign, which shortchanges his message and his challenge to the party establishment.

Sanders’ many years in Vermont did nothing to help him connect with people of color. He has gotten much better at expressing his commitment to racial justice, and his campaign has made some progress in this area, although his style still smacks of Old Left white economism. Hillary Clinton played on this disadvantage shrewdly at Sunday night’s debate, repeatedly asserting that she stands with President Obama on health care, Wall Street, Syria and more. Sanders must go lightly on his differences with Obama, because his immediate greatest need is to win over black and Hispanic voters in the Obama coalition. All he can do in this area, as he said, is hope that greater exposure to him will make it happen.

Meanwhile he is undercutting his message by refusing to say that we do not need another Clinton administration. Sanders repeated on Sunday night that he refuses to personally attack the Clintons, but that is not what matters. There is no reason to believe that the next Clinton administration would be significantly different from the last one. We don’t need to hear about the personal screw-ups of any Clinton, but we need very much to interrogate the Clinton legacy in American politics.

Bill Clinton is justly popular among Democrats for presiding over a robust economy and three years of budget surpluses. He also pushed through a gas tax, the last president even to try. He also took pride in ramming NAFTA down our throats. He expanded the federal death penalty and the war on drugs. He ended the federal government’s 60-year commitment to provide income support for the poor. He supported and signed the Defense of Marriage Act, which, mercifully, is no more. Near the end he tore down the Glass-Steagall wall separating commercial and investment banking, whereby Wall Street fell in love with derivatives. Throughout his presidency, Clinton specialized in co-opting Republican issues, notably the Three Strike laws that stuffed American prisons with people of color. His triangulating cynicism demoralized the progressive base of the Democratic Party, and he topped it off with a sexual scandal.

I respect Hillary Clinton as much as possible, and I half expect to support her, more or less, by July. But we deserve an honest discussion during primary season about why we need something better than the last Clinton administration. That has not happened, even though opposing the party establishment is the point of Sanders’ magnificent campaign. Meanwhile Hillary Clinton pushes a brazenly dishonest charge that universalizing Medicare would make Medicare benefits hostage to state politics. To those who remember the 1990s, that is a sickening reminder of how the Clintons play ball.

Michael Harrington, who succeeded Norman Thomas and Sanders’ hero, Eugene Debs, as the leader of the Socialist Party, never ran for the presidency, unlike Thomas and Debs. By Mike’s time, Socialists had given up on running for president, even as a message strategy. Then he broke up the party in 1972 in order to dissociate his progressive faction from the Cold War Social Democrats who went on to become neoconservatives.

Harrington was a brilliant speaker and public intellectual. He tried to advance progressive Social Democratic values by working in the Democratic Party, and I have thought of him often in the past year as Sanders wages his extraordinary campaign. Harrington poured himself out in an exhausting regimen of speaking tours, book writing, teaching and movement organizing, all to reach a tiny fraction of the audience that Sanders reaches every week with the same message. Considering the contrast, I hesitate to say that I wish for more from Bernie Sanders. But he has already soared beyond what I thought was possible, and he is just getting started.

Gary Dorrien is the Reinhold Niebuhr Professor of Social Ethics at Union Theological Seminary and Professor of Religion at Columbia University. His many books include Kantian Reason and Hegelian Spirit, which won the Association of American Publishers’ PROSE Award, and most recently, The New Abolition: W. E. B. Du Bois and the Black Social Gospel.
Do you like this post?
Tweet