Well-Kept Secret: Religion’s Role in the Triumph of Neoliberalism 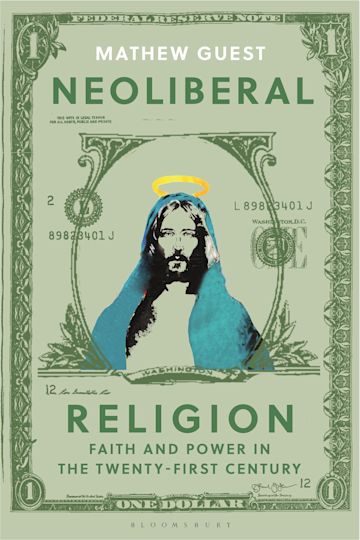 Reviewing a slim and rather dry volume by a British sociologist of religion is not the sort of thing one imagines provoking an outraged response. Yet I found myself increasingly agitated as I made my way through Matthew Guest’s Neoliberal Religion: Faith and Power in the Twenty-First Century (Bloomsbury Academic 2022).

I doubt that Professor Guest intended to spark outrage; his prose is deadly dull.  But behind the dry facade, one can imagine a different Matthew Guest, sitting in a Durham pub (he teaches at the university there) with a few pints under his belt, railing in high dudgeon about contemporary religion’s subservience to the real-world masters of the universe: the uber-capitalists and their agents in government who not only built the economy we all inhabit but who also constructed the mental map that makes its outrageousness invisible, thus allowing the whole thing to be accepted uncritically as simply “the way things are.”

What exactly is the neoliberal regime that is now so completely normalized? In brief, it is a systematic reversal of the restraints placed on big capital in the wake of the Great Depression. Its rise dates from roughly fifty years ago, when future Supreme Court Justice Lewis Powell drafted his memorandum proposing a coordinated campaign to push back against government regulation, progressive taxation, union power, and what Powell perceived to be the overall anti-business cast of both common discourse and mainstream media reporting.

Milton Friedman, Friedrich von Hayek, Margaret Thatcher, Ronald Reagan, Tony Blair, Bill Clinton, the Harvard Business School: all of these helped to turn things around to Powell’s liking, leaving us with a higher concentration of wealth at the top today than in October of 1929.  For decades U.S. lefties could at least point to Sweden as a shining example of managed capitalism, a place where social democratic values were still alive and kicking. These days, even the Swedes appear to have drunk the neoliberals’ KoolAid; the French Left is likewise boxed in and mostly silent as the U.S. “model” of unfettered investment takes hold there; and in Italy, the cradle of anarchism, Mussolini-style fascism seems to be in fashion once again--which points to a theme that Guest explores inadequately: how the reign of neoliberalism relates to the rise of a dangerous nationalism.

Guest ticks off the main markers of the neoliberal regime--deregulation, marketization, and privatization in the economy--along with choice, competition, and commodification defining the common culture--while underplaying, in my view, the extent to which the entire edifice rests on violence in the form of a race to the bottom on wages, working conditions, and environmental safeguards along with the remarkable degree to which work is devalued and degraded even as money is elevated and sacralized.

You might say that this kind of violence, this grinding of the faces of the poor, is at least as old as Charles Dickens. But the point is that Dickens and his 20th century epigones (Dreiser, Dos Passos, Steinbeck, etc.)saw the nightmarish conditions for workers become significantly mitigated by way of repeated bottom-up revolts against the cruelty and violence of the rentier class. Not so today. The late Barbara Ehrenreich’s devastating report on what low-wage work is really like was treated as a curiosity; Thomas Piketty’s powerful critique of globalized capitalism has been valued mainly as an interesting thought experiment. Today’s immiseration of those at the very bottom of the heap (e.g., the sleepless workers stitching together fast fashion items in Bangladesh) surpasses in its brutality the immiseration that Dickens, Emile Zola, and their contemporaries chronicled so vividly; the difference is that today nobody seems to give much of a damn.

Guest is clear about how government has been so thoroughly captured by the capitalists that, for example, the 2007-2008 economic collapse barely made a dent in neoliberalism’s vise-like grip on politics.. He recalls how the financial types who caused the crisis were not punished, how the big banks selling dodgy derivatives were bailed out, and how the ordinary working people whose houses were foreclosed were simply made to suck it up. While the COVID nightmare and China’s refusal to play by the West’s rules have recently produced new cracks in the neoliberal consensus, the smart money is still betting that these signs of resistance will be quickly snuffed out.

Guest is likewise helpful on how the commodification of everything, including personal relationships and sex, carries a strong gendered edge that plays to the advantage of powerful men. More generally, he underscores how treating all of life in market terms tends to favor the already favored. He makes passing mention of how societies that measure success according to acquisition feed, and are fed by, a blatant Eurocentric racism--a topic that clearly deserves much more attention.

In a telling apercu, Guest discerns an analogy between consumerism’s seeming immunity from critique and a similar immunity enjoyed by religion itself. He writes that the myth that markets are governed only by economic efficiency rather than the interests of particular individuals, and the related assumption that markets do not embody values, “lend weight to claims that the effectiveness of neoliberal markets is beyond question and that to ask moral questions about their consequences is somehow improper or irrelevant.” I would add that in respect to the sacrosanct aura surrounding neoliberalism’s chief tenets, we are faced not merely with a case of economism being like religion but of economism itself actually amounting to a form of religion.

Of course, astute theologians--and here the late Walter Wink and the indefatigable John Cobb come to mind--made this point many decades ago, as neoliberalism was first making its ascent. Guest is not a theologian, let alone an activist theologian, and for this reason his book suffers on the very point where it should be strongest: illuminating the many connections between the dominant contemporary expressions of post-Protestant “me” religion and the neoliberal regime.

To be fair, Guest does discuss the marketing mindsets and market-based assumptions of the Christian “ministries” that still grow rapidly in Western countries and that grow even more spectacularly throughout the Global South. And he does relate the enactment of “performative identity” in aggressively evangelical churches to the ubiquity of “cosmetic” personalities in the economic marketplace. All well and good, but Guest largely fumbles the opportunity to explain how evangelical Protestantism’s heavy emphasis on individual rather than collective salvation laid the psychological foundation for neoliberalism’s privatization agenda in the first place.

Extreme atomization and the burden of having to go it alone hardly began with the likes of Milton Friedman; neoliberalism’s architects were able to plant their concepts in ground that was already well prepared by Charles G. Finney and the two dashing Billys (Billy Sunday and Billy Graham) and the smug Norman Vincent Peale (of “positive thinking” fame)--all of them preaching that Christ would really like to help you, but first you’ve got to get off your butt, clean up your act, and get out there and hustle. And if you fail, well, that’s on you and your sinful self. You are not allowed to blame Jesus.

But to return to where I began: everything about neoliberalism sickens me and offends my sense of basic morality. And what sickens me most is how widely accepted the system is, how firmly embedded and fully naturalized it has become.

Even when all of the economic, environmental, psychological, racial, and sexual violence inflicted on us and on our fragile planet by the neoliberal regime has been laid bare for all to see, will we remain largely uninterested in overthrowing it? Will we continue to reserve most of our ire for the populist fraudsters and garden-variety haters while still permitting our class criminals to bask in adulation and inscribe their odious names on more and more bits of what used to be the commons? Will we persist in indulging the illusion that private (tax-favored!) philanthropy can ever be an acceptable substitute for public justice?

Is my hope for broader and more robust religious critique just a pipe dream or am I living in the wrong century?

Peter Laarman is a retired minister who is currently investigating the history of the Providence church he attends in relation to Rhode Island's key role in profiting from slavery. During his active career in ministry he led the Judson Memorial Church in New York and Progressive Christians Uniting in Los Angeles.