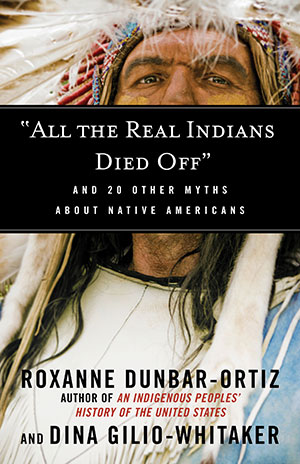 All the Real Indians Died Off” and 20 Other Myths About Native Americans by Roxanne Dunbar-Ortiz and Dina Gilio-Whitaker, Beacon Press, 2016. Beacon Press is a department of the Unitarian Universalist Association.

I never saw a “real” Indian until I was 15 years old, but I had wept in darkened movie theaters as yet another band of proud Indians surrendered. I’d painted my face and posed with a toy bow and arrow in my faux buckskin Halloween costume. And I’d been upset when my favorite aunt, who’d moved to Cheyenne and promised me a real Indian princess outfit, sent a turquoise Navajo skirt and blouse that did not fit my image of what an Indian princess should wear. No feathers, no fringe.  In fact, long before I was 15, I’d absorbed just about every myth that scholars and activists Roxanne Dunbar-Ortiz and Dina Gilio-Whitaker (Colville Confederated Tribes) debunk in their new book “All the Real Indians Died Off” and 20 Other Myths About Native Americans.

Appearing just in time for this year’s Indigenous Peoples’ Day and two years after Dunbar-Ortiz’s acclaimed An Indigenous Peoples’ History of the United States, the book covers well-trod ground and explores some new territory. Is there anyone on the left today who would defend Christopher Columbus or who would deny the U.S. policy of genocide toward Native Americans? Would anyone on the left condone the use of the “R” word?

Still, no matter how knowledgeable you think you are, you’ll become more knowledgeable after reading this book and perhaps acknowledge myths you may not have known you believed. The debunking is in the service of the book’s major theme, which is that all of these myths, in fact, all U.S. colonial policy toward Native Americans is one of annihilation. Four hundred years on, Indigenous peoples are no longer massacred in their tents or hogans but are made invisible by cultural appropriation, relentless racism, convoluted definitions of who is a “real” Indian, and the legacy of broken treaties and disastrous Supreme Court decisions.

Not until 1924 were all Indians made citizens. Thousands of children were separated from their families and sent either to Christian boarding schools or U.S. government boarding schools where they were forbidden to speak their native tongues or dress in traditional ways. Richard Henry Pratt, founder of the prototype Carlisle Indian School in Pennsylvania is notorious for his famous quote about assimilation: "A great general has said that the only good Indian is a dead one. In a sense, I agree with the sentiment, but only in this: that all the Indian there is in the race should be dead. Kill the Indian in him and save the man."

Even though there are 5.4 million Indians in this country, most non-Indians operate from a very limited worldview about them. One of the biggest myths is that the Indigenous population was wiped out and those who remain are hopelessly poor and alcoholic. A countervailing myth is that those who remain are rich from casinos. Although the majority of Native Americans do not live on reservations, in the popular mind that is the only place they exist, bursting forth in full regalia to dance for the tourists. Their costumes are in the public domain for fashion statements and Halloween, their names and idealized images available to sell everything from butter to beer to football.

The actual 2% of the population, invisible in plain sight, consists of truck drivers, teachers, lawyers, actors, dancers, police officers, nurses, doctors, shopkeepers, beauticians, and so on. Still, when was the last time you saw one on television or in a movie who was not a victim or a doomed nineteenth-century warrior?

The Indian as victim is a myth that the authors believe is particularly pernicious. In fact, Indians “surrendered” only to live to fight another day. After the gold and land rushes of the nineteenth century and the naked greed and terror they unleashed, the appropriation of Native land and violation of treaties in modern times focuses more on natural resources. The authors sound a semi-hopeful note that alliances to protect natural resources as well as shifts in attitudes in Washington brought about by political pressure will bring some changes.

As I write, Indian Country Times reports that last week the U.S. government agreed to pay $492 million to 17 American Indian tribes to settle claims of mismanagement. Melody McCoy, a lawyer for the Native American Rights, said, “We expected these cases to be in litigation forever against the federal government. Settlements weren’t anything we expected until a guy named Barack Obama changed all that.” Thousands of people from 300 separate Indian nations as well as Indigenous people from other countries have joined with the water protectors at the Standing Rock Sioux encampment against the Dakota Access Pipeline.

Although Dunbar-Ortiz and Gilio-Whitaker focus on land and power as the primary drivers of colonization, they acknowledge the role of religion in the conflict.  Christopher Columbus was concerned about the state of the souls of the unfortunate people he encountered, and their conversion was almost as important to him as their ability to lead him to gold. This did not mean that he treated them with anything resembling Christian charity. It does mean, as Thomas King argues in The Inconvenient Indian: A Curious Account of Native People in North America, that Christianity is the “gateway drug” to capitalism. By converting the Indians, the conquerors hoped to persuade the naïve “savages” to accede to such modern ideas as ownership of private property, i.e., land that could be pried from them.

Indians may not have always successfully resisted Christianization (one reason may be that the Christianizers at times tried to be allies) but they have, in many cases, held on to pre-capitalist forms of organization and ways of thinking in their emphasis on community rather than individualism. We see this refusal to think like the Western conquerors in the fact that nations that are dependent on extractive industries as well as those that aren’t have come together in solidarity at Standing Rock. In other words, those who could profit from pipelines and fracking understand that in the long run, jeopardizing their water does nobody any good. This is not a frame of mind understandable either to Wall Street or much of Main Street.

The authors liken Indigenous people to the proverbial canaries in the coal mine, noting that “In a hyper-industrialized, super-exploitative world, what happens to Indigenous people will eventually happen to everyone.” Back in the day, Indians in the global South had no way to communicate with those in the North or in other countries. Today, their struggles can be linked. Today, too, they can use the tools of the oppressor--the legal system--to fight back.

Indians continue to resist. An example of cultural appropriation that the authors do not mention is the familiar T-shirt with the picture of warriors holding rifles underneath the heading “Homeland Security: Fighting Terrorism Since 1492.” If you look on the Internet, all the models wearing this T-shirt are white. But their bodies speak a truth. Indians remain in our faces: still here, still fighting.

Maxine Phillips is the volunteer editor of Democratic Left and a member of the editorial team of religioussocialism.org.